The Microsoft Effect: Will Google Become What It Fears? - Knowledge@Wharton

The Microsoft Effect: Will Google Become What It Fears? 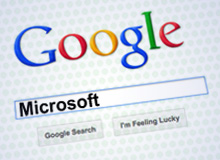 Former Apple CEO Steve Jobs once warned Google co-founder Larry Page that the search giant was dangerously close to becoming another Microsoft — that is, a company that was spreading itself too thin by trying to do everything. In Walter Isaacson’s biography of Jobs, the late Apple leader recounted his advice to Page, who became Google’s CEO last April: “Figure out what Google wants to be when it grows up. It’s now all over the map. What are the five products you want to focus on? Get rid of the rest, because they’re dragging you down. They’re turning you into Microsoft.”

Is Google becoming too bloated? In recent years, the company has grown from being simply a search engine company to having a hand in a range of sectors including mobile, social media, cloud computing, digital music sales and more. Like Jobs, some analysts are beginning to speculate that Google’s expansion will make it more difficult for innovative ideas to come to the surface.

How can Google avoid some of the missteps made by Microsoft during its rapid expansion? And what can the search company learn from Microsoft — which, after all, continues to be a profitable company despite charges that its size has made it less nimble in reacting to market changes and introducing game-changing products.

“Microsoft’s great fear was always that it would turn into IBM, which it viewed as a bureaucratic organization living off of past glories,” says Kevin Werbach, a professor of legal studies and business ethics at Wharton. “Google’s fear is that it will become Microsoft, which it views as a company that wins through bullying rather than technical prowess. Microsoft became what it feared. Google’s challenge is to remain open and innovative after achieving Microsoft-like domination of its core market.”

Comparisons between Google and Microsoft began to surface soon after the search engine company went public in 2004. Both firms started out dominating in one area — for Google, it was search; for Microsoft, it was the Windows operating system. By leveraging those core strengths, the companies were able to move into new markets. Google expanded into display advertising and later the mobile phone space with its Android operating system. Microsoft expanded into other software products, such as its Office word processing suite, and into the entertainment sector with its Xbox video game system.

The two are now competing directly on several fronts. Microsoft’s Bing search engine hopes to steal market share from Google’s dominant search service. Microsoft has also tried to expand into mobile with its Windows Phone 7 operating system. Wharton management professor Saikat Chaudhuri notes that both Google and Microsoft started out as engineering-focused companies. “Search is Google’s Windows. The comparison between Google and Microsoft is apt,” he says. “Both have become large incumbent players looking to new growth areas.”

But Google and Microsoft are at very different stages in their life spans. “Google is in its teenage years,” Wharton legal studies and business ethics professor Andrea Matwyshyn notes. “There’s a different tenor in the way [the two] perceive value creation.”

In Google’s initial public offering prospectus, co-founders Page and Sergey Brin outlined their “don’t be evil” motto, which revolved around the idea that stakeholders “will be better served — as shareholders and in all other ways — by a company that does good things for the world, even if we forgo some short-term gains.”

Since that letter, however, Google, like Microsoft before it, has drawn the scrutiny of antitrust regulators from the United States and Europe regarding Google’s business practices and whether its dominance in the search market can be considered a monopoly. Microsoft dealt with a comparable situation in the late 1990s, when the company was sued by the U.S. Department of Justice and 20 states that alleged Microsoft abused its dominant market position in the way it sold operating systems and web browsers.

Testifying before a Senate subcommittee on antitrust on September 21, 2011, Google executive chairman Eric Schmidt argued that times and the technology market are much different than they were when Microsoft was grappling with similar issues. He also noted that Microsoft has integrated Bing into many of its products and brokered strategic deals to make it the exclusive search engine for sites such as Yahoo and Facebook. According to Schmidt, those efforts have generated speculation that the search engine “could overtake Google as early as 2012.”

According to November figures from research firm comScore, however, Google controlled a commanding 67.6% of the search engine market, compared with a 26.7% share for Bing. “Google resembles Microsoft more than Google thinks it does,” Matwyshyn points out.

The Challenge of Growth

Wharton experts suggest that, rather than simply backing away from comparisons to Microsoft, Google should closely examine the other company’s history and try to learn from it. “Jobs’s comment to Larry Page is ironic, because Apple and Microsoft are both ruthlessly controlling in a way that Google never was,” says Werbach. “I’m not sure Apple’s relentless focus would be the right approach for Google. The surest path for Google to become more Microsoft-like would be to adopt the top-down mindset that Jobs employed at Apple. Android is a great example [of why that may be unwise.] The only reason Google surpassed Microsoft and caught up to Apple in mobile is that it gave away an open platform, which neither of those companies would ever do.”

But as Google becomes larger, it can expect to face a new set of challenges. For the year ending December 31, Google is expected to report earnings of $9.57 billion on revenue of $29.3 billion, according to Thomson Reuters estimates. By contrast, Microsoft reported net income of $23.15 billion on revenue of $69.94 billion for the fiscal year ending June 30. “It becomes challenging for any company to remain innovative after reaching a certain scale,” says Wharton new media director Kendall Whitehouse. “The larger a company gets, the more product development becomes procedural. The danger is that some innovative ideas get squelched. How do you keep that startup entrepreneurial spirit alive while keeping your current revenue streams going?”

Chaudhuri agrees. “Google is known for an innovative spirit, but it will have to think about [instituting] centralized processes [as it grows], and that creates risks.” In addition, larger companies need to make bigger splashes with new products or services in order to significantly impact revenue. “Companies like Google and Microsoft need to have big new things,” says Chaudhuri. “Innovations can’t be little new things, or they have limited impact from an organizational point of view.”

Microsoft has tried to foster a culture of innovation through tasking smaller, autonomous groups with working on new projects. For instance, Microsoft’s Xbox effort started out as a division separate from the Windows juggernaut, Whitehouse notes. Google’s approach is to allow employees to carve out a percentage of their time to focus on new technologies, says Werbach. “Larry Page taking over for Eric Schmidt as CEO indicates that Google has no intention of ‘growing up,'” he states. “It’s doubling down on its engineering roots.”

Indeed, Google has demonstrated a willingness to keep experimenting with services until it finds a version that catches on with consumers. The company’s social media efforts, for example, have cycled through the unsuccessful Google Buzz and Google Wave. Now, the search giant is trying to build Google+ into a viable competitor to Facebook.

Every year, co-founders Page and Brin write a letter to shareholders. In the 2010 edition, they noted that Google has been “prepared, from the get-go, to place big bets on new technologies — with the full knowledge that not all of these will always pay off.” Indeed, Page scuttled a series of projects in the last year, including the personal health record service Google Health and a plan to digitize the world’s newspapers archives and make them available online.

But just like Microsoft before it, Google would not be able to completely halt the natural change in culture that occurs as companies grow. The challenge for Google will be to hold on to its reputation for innovation and experimentation, and to continue to attract top tech talent, even if newer firms are heralded as the “next big thing.” “In the hierarchy of Silicon Valley, Google is already less exciting than Facebook, Twitter and Zynga,” Werbach points out. “But that’s inevitable with scale and age.”

Matwyshyn points to Microsoft as an example of why Google might have trouble staying nimble as it grows. “Microsoft has a lot of good ideas internally, but they don’t always bubble up to the production line,” says Matwyshyn, adding that “Microsoft also has bad timing.” Although the software firm was initially ahead at developing touch screen technology, she notes, it took Apple’s iPhone to make the feature popular. Microsoft also entered the tablet market before consumers were ready, only to watch Apple dominate the market.

Google “has a better sense of what consumers are ready for,” Matwyshyn says. But the search giant has also occasionally missed the target. For example, Google TV, an Android-based set-top box, was supposed to integrate the web with the digital living room. But like Microsoft’s WebTV offering and other similar efforts, the project has struggled to catch on. “These companies get big, and it’s hard to keep the innovation engine running,” Chaudhuri says. “It’s a classic problem.”

Although the Google-Microsoft comparison has recently become a popular topic among technology analysts, experts at Wharton say that there is a group of tech companies that are all converging on the same turf. And it is highly likely that these companies also will run into the same issues as Microsoft over time. “A lot of big technology companies are starting to look alike,” Wharton management professor Lawrence Hrebiniak notes. “Apple, Amazon, Facebook and Google are converging. There’s a lot of stepping on toes.”

"The Microsoft Effect: Will Google Become What It Fears?." Knowledge@Wharton. The Wharton School, University of Pennsylvania, 20 December, 2011. Web. 16 September, 2021 <https://knowledge.wharton.upenn.edu/article/the-microsoft-effect-will-google-become-what-it-fears/>

The Microsoft Effect: Will Google Become What It Fears?. Knowledge@Wharton (2011, December 20). Retrieved from https://knowledge.wharton.upenn.edu/article/the-microsoft-effect-will-google-become-what-it-fears/