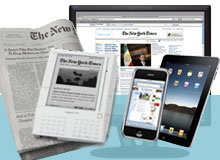 Borders is expected to file for Chapter 11 bankruptcy this week, a move that would allow it to keep operating while it restructures amid what are anticipated to be significant layoffs and store closings. Meanwhile, The New York Times Sunday book review section announced two new lists in its print edition: One has fiction and non-fiction ranks that combine print and ebook sales, and the other has only ebooks sales, both fiction and non-fiction.

KnowledgeToday asked two Wharton management professors — Daniel Raff and Stephen Kobrin — to analyze the impact that these two developments will have on publishers, authors and readers:

KT: Does this latest news suggest that bricks-and-mortar stores no longer have a future?

Raff: The publishing industry is in a period of business model uncertainty, and these events will make re-evaluation of strategy seem only more urgent. Local independent bookstores whose operators had figured out how to make themselves something of a destination will see their position strengthened: There are not so many such stores but perhaps more than one might think. Marginal independents will face less bricks-and-mortar competition but no particular respite from the pressures posed by Amazon and ebooks.

Barnes & Noble is certainly better positioned than Borders was relative to the ebook world. It remains to be seen whether they are positioned well enough and, indeed, what the eventual market share of electronic books will be. The traditional book isn’t going away anytime soon, but whether the market will remain large enough … to sustain national chains like Borders is an open question at the moment.

Kobrin: While it is speculative, I think (perhaps hope) that there will be an enlarged role for independent book stores that add value to the book shopping experience. Stores that have knowledgeable staff, provide a very congenial and productive venue for shopping, perhaps specialize and most important, provide readers with the means to sort through the flood of books being published in one form or another may well survive and even thrive. As it becomes harder to find a decent selection of books in bricks-and-mortar stores, it will be increasingly difficult for readers to find a way to become aware of, and evaluate, books.

KT: What will be the immediate impact of a bankruptcy filing on Borders’ employees (e.g. layoffs, store closings) and on the public?

Raff: One consequence of reorganization will be that current Borders customers will have fewer opportunities for visiting the local store and thus fewer books they can browse in the traditional way and contemplate buying. Publishers will also lose an opportunity to put their wares directly in front of potential customers. Publishing is still a make-to-stock business and those stocks will go down: I expect that first printing numbers for the big commercial publishers will decline considerably in the near term.

Kobrin: People will miss book stores. To the extent that Borders and the other big box stores took the industry in what became an untenable direction, there will be a gap that needs to be filled.

KT: How did Borders get to this point, given that it was such a success story during the 1980s and 1990s? What mistakes did it make along the way that led to this decision?

Raff: Borders first came to widespread public attention in the 1990s on the strength of innovative inventory management software which enabled the firm to merchandise its stores unusually broadly. Many of its stores had a breadth of offerings previously only familiar in the central business districts of major cities and in large university towns.  This development was a very positive thing for America.

The company eventually met competition … from Barnes & Noble and then, more problematically, from Amazon. Amazon did not really offer in-store experiences [like those] that many Borders customers valued, but it did offer tremendous variety and relatively rapid delivery — both of these with a very different cost structure. Borders never really invested adequately in online sales, and it was left very far behind when the age of electronic transmission of texts came upon the business. It now clearly has excessive fixed costs for its revenue flows and, in particular, too many stores. We will surely see a much smaller company emerging from any bankruptcy reorganization. The longer-term prospects of such a slimmed-down company are not yet clear.

Kobrin: First, changes such as Amazon’s business model and later, the emergence of ebooks have disrupted the entire industry. Second, Borders’ original Ann Arbor (Michigan) store was a very large entity with tremendous depth in stock, especially backlists, and a very knowledgeable staff. As they expanded, they moved into larger stores outside of city centers in malls that were high rent locations that required volume.

This led to a focus on best sellers at the expense of depth — transactions as opposed to inventory — and the need for staff that probably took them beyond people who were really knowledgeable about, or even very interested in, books. That left Borders very vulnerable to Amazon: If you can get the book in two days at a significant discount, what value did Borders add?

KT: What are the implications for publishers and authors of The New York Times Book Review’s two new lists?

Raff: The general thought in the trade about The New York Times ebook best-seller lists is that it is a sign of the times in both senses of the phrase. Yes, significant numbers of books are now being sold in the new format. There is some skepticism that the Times is measuring the sales particularly accurately, branded and salient though its list may be.

Kobrin: It may give both authors and publishers a better sense of the market and where and how it is growing. However, there is a real danger here, and I am not sure that this is entirely a good thing. One of the problems with trends in bricks-and-mortar stores over the last few years is that it has become harder and harder to get middle market books distributed and displayed. Ebooks overcome that problem as display space is not an issue on the web, and the emergence of ebooks should allow readers access to a much broader range of books than before. Given that, I am not sure that focusing once again on best sellers will be productive.

Upended by eBooks: Is This the Last Chapter for the Book Business? Knowledge at Wharton