The rapid pace of technological progress has revolutionized any number of industries. It has also generated a huge and rapidly growing toxic waste stream that threatens people’s health, the environment and even national security. This report looks at the scale and nature of the challenges posed by e-waste and how they might best be met.

Millions of tons of electronics are tossed out each year. A small percentage is collected and responsibly reused or recycled, but most is not. An alarming amount ends up in developing countries where thousands earn their livelihood by extracting precious metals using medieval techniques that ruin their health and despoil the environment. Some steps have been taken to remedy the situation, but with limited success. Meanwhile, national security concerns have arisen as improper recycling of e-waste puts sensitive data at risk and enables the production of unreliable counterfeit components that are used by the U.S. military.

More than $20 billion in gold and silver is used each year to manufacture new electronic devices. Until relatively recently, the recovery of those precious metals and others fueled e-waste recycling efforts. But falling commodity prices have wreaked havoc in the recycling industry, as have ever-thinner, more sophisticated products that make it increasingly difficult to extract what little valuable material is inside. A few retailers are helping consumers responsibly recycle, some manufacturers are designing products for easier recycling and some companies are facilitating the reuse of discarded products. Key to these efforts is the ability to prevent stored data from being scavenged.

Recognizing the need for responsible recycling of electronics, the U.S. Environmental Protection Agency along with state regulators, the private sector and nonprofits established the R2 protocol — a set of best practices to be adhered to by certified recyclers. Now administered by Sustainable Electronics Recycling International (SERI), R2 has certified more than 500 recyclers around the world. The Basel Action Network (BAN) participated in the EPA’s R2 process, but broke away from it after two-and-a-half years, claiming it was insufficient. One difference with R2 is that it would ban any export of toxic e-waste to developing nations. BAN became a competing standard known as e-Stewards. However, having two rival certifications can be confusing, leaving recyclers unsure about which route to take.

How U.S. Laws Do (and Don’t) Support E-Recycling and Reuse

The United States has no federal law governing e-waste recycling. A bill introduced in 2011 has never had a hearing. Lacking federal leadership, many states have enacted regulations of their own. While almost all rely to some extent on funding by manufacturers, differences among the approaches offer valuable lessons about what kinds of recycling regulations work best. But none have the authority needed to govern international activities or the clout to seriously influence manufacturing practices. 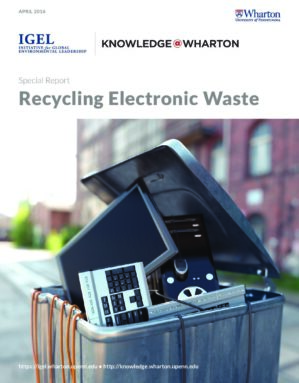