The U.S. public water system needs a massive, long-deferred investment if it is to meet the needs of a growing population. Neither the public nor the private sector alone is up to the challenge, but a growing number of public-private partnerships is providing a template for how government and business together can help build, renovate and maintain the water infrastructure America desperately needs. This special report, produced by the Initiative for Global Environmental Leadership (IGEL) and Knowledge at Wharton, looks at the key issues stakeholders need to understand.

Aging pipes are crumbling unseen beneath our feet, but all too often the public and the officials they elect are more interested in quick fixes that keep rates low than in long-term solutions that can be extremely costly in the short run. Over the years, well-intended funding schemes have made matters worse by creating misguided incentives. And partly as a result of infrastructure neglect, an estimated $1 trillion will be needed over the next 25 years simply to ensure that everyone in the U.S. continues to have access to clean, fresh water.

Document Making the Most of Public-private Partnerships

Confronted with ballooning debt, consent decrees and the huge cost of updating and maintaining aging infrastructure, a growing number of municipalities are partnering with private companies to finance and manage needed improvements to their water systems. These public-private partnerships (P3s) take different forms, distinguished primarily by the duration of the partnership, the nature of the financing and the sources of revenue. All parties can benefit when key elements are addressed.

Bayonne, N. J.: Already struggling before Hurricane Sandy hit, the city of Bayonne entered a joint venture partnership with Kohlberg Kravis Roberts and United Water soon after the storm. While the city maintains ownership and the control of user rates, the agreement eliminates existing municipal debt and improves both the water authority’s finances and Bayonne’s credit rating.

Rialto, Calif.: Struggling to meet underfunded pension liabilities and ensure the health and longevity of its water system, Rialto entered into a 30-year public-private partnership agreement with Veolia Water as the operator and Ullico as the lead finance partner. The agreement settles the city’s water-related debt, provides a significant cash infusion upfront and commits to major capital improvement projects. 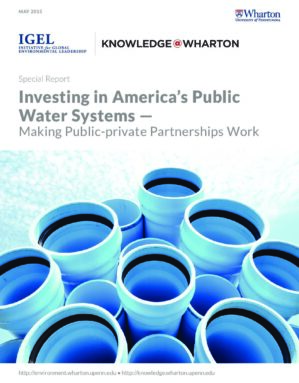