It was Robert Redford, a trustee of the Natural Resources Defense Council (NRDC), who first suggested that sports are the key to vastly extending environmental awareness in this country. Looking back on that moment in 2004, Allen Hershkowitz, a senior scientist at the NRDC, wondered why it took so long. “It’s crazy,” he said. “It took the environmental community more than 30 years from the first Earth Day to partner with sports. It was the elephant in the room. Only 13% of Americans follow science, but 63% follow sports.”

In part because this was a movement waiting to be born, progress was remarkably quick: By 2005, NRDC had an alliance with Major League Baseball (MLB). In 2007, the National Basketball Association (NBA) was added, followed by the United States Tennis Association (USTA) and the National Hockey League (NHL) in 2008, Major League Soccer (MLS) in 2009 and NASCAR in 2013. NRDC’s focus on professional teams was recently expanded to include college sports as well, both athletics and recreation. To date, NRDC advises more teams, leagues and college athletic departments about environmental issues than any organization in the world, and this has encouraged hundreds of universities in the United States to pursue sports greening programs.

Since launching nationally in March 2011 with these six professional teams and five venues, the Alliance has grown to over 200 professional and collegiate teams and venues from 16 different sports leagues. The Alliance, which works with professional and college sports teams every day, also hosts annual summits, where representatives of nearly every major sport in the U.S., as well as suppliers of everything from solar panels to compostable plates, share ideas and information that help to advance the green sports movement.

In September, the Initiative for Global Environmental Leadership (IGEL) and the NRDC jointly sponsored a Wharton conference on Leadership in Greening the Sports Industry. The following special report includes information shared at the conference and gathered from experts in the field.

The Financial Benefits of Sports

Waste streams are becoming revenue streams, and that’s one reason sports teams and leagues are embracing new sustainability models. Stadiums are plucking the low-hanging fruit and are now regularly powered by alternative energy, with highly efficient lighting, composting and vigorous recycling efforts. The work has proven to have benefits beyond simply “doing good” and is bolstered by big savings and year-end results.

Greener venues are boosting the bottom line by growing revenue and shrinking costs. Companies with environmental messages are eager to reach the country’s millions of enthusiastic and loyal sports fans by sponsoring green activities and events at stadiums, arenas and race tracks. Both professional and college sports are beginning to mine this new source of revenue, which has the potential to power profits and environmental efforts over the long term.

Reducing Sports’ Impact on the Environment

Greening efforts in the sports world are extensive, but how much are they benefiting the planet? New efforts are underway to aggregate, quantify and measure how programs have performed based on energy, waste and water-use data. Next stop: sustainability reports that inform the public about the work in progress.

With their millions of fans, professional and college sports have enormous power to influence attitudes and behavior toward the environment. When recycling becomes a normal part of attending a game, fans begin to expect and push for recycling at home and at work. And messages delivered at games, on TV and online influence tens of millions of fans on a regular basis.

Green Sports and Transportation: The Elephant in the Room

In nearly all measures of sports’ environmental impact, airplane and surface travel — by teams and (mostly) fans — looms largest. Reducing miles traveled is a challenge because teams have far less control over fan behavior than over their own operations. But innovative approaches are making progress. 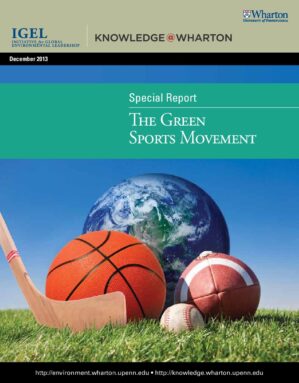