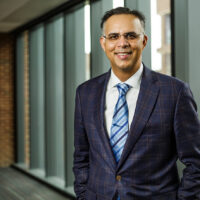 Jeff Bezos, Elon Musk, and Richard Branson have created controversy with space tourism for the uber-wealthy and the potential colonization of Mars, but their intense competition for dominance of the space industry will yield greater benefits for business and society, says Wharton management professor Rahul Kapoor.

The billionaire space race may seem like the ultimate self-indulgence for titans of industry who have it all. But beyond the headlines, there’s real innovation being done by their respective companies: Blue Origin, SpaceX, and Virgin Galactic. Helmed by Bezos, Blue Origin is participating in Amazon’s Project Kuiper to launch satellites for global broadband connectivity. Musk is taking on a similar task with his Starlink project under SpaceX. And both companies have been awarded multimillion-dollar contracts with NASA to improve the agency’s satellite communications network. Branson, meanwhile, is trying to disrupt the travel and transportation industry with commercial spaceflight.

“This is clearly an uncharted territory, no pun intended, for any technology company,” Kapoor said in an interview with Wharton Business Daily on SiriusXM. “From my perspective, the general space era is really a greenfield in terms of technological and business opportunities. What Amazon is doing with Project Kuiper, what SpaceX is doing with Starlink, are attempts at unleashing the business and technological potential that the new space era presents.”

Tech companies have an obvious interest in expanding high-speed internet connectivity; it’s at the heart of Amazon’s business model. Developing their own broadband network also makes them more self-reliant by lowering dependence on outside providers like Comcast. Kapoor sees these goals as creating “interesting synergies” for the companies to apply their core competencies to bigger business opportunities. For example, Amazon has stated that Project Kuiper will focus on connectivity for underserved regions, which Kapoor said seems like a starting point for the firm to iterate before conquering other markets.

“I see what SpaceX is doing, what Amazon is doing as giving us more shots at the goal, more experimentation, more innovation.” — Rahul Kapoor

“The internet is a utility. In fact, many would argue [it’s] probably the most important utility, especially given what we’ve all gone through in the last two years with COVID and work from home,” he said. “I think these initiatives of expanding internet coverage and being a key player in high-speed connectivity create enormous long-term synergies but also give them more control over their business value proposition.”

Building satellite infrastructure is a highly capital-intensive venture, so it’s logical that these unicorn companies are financing the work. Their investments are likely to pay off in the long term as they build the next-gen infrastructure for the industry.

“Once you have the system in place, then you ride the economics around these infrastructure investments for a very long time,” Kapoor said.

‘More Shots at the Goal’

The professor has developed an MBA course titled “Technology, Innovation and Entrepreneurship in the New Space Era,” which examines how entrepreneurship, innovation, and technology are shaping the space industry. In researching information for his course, he’s learned that while the billionaires grab all the media attention, there are hundreds of smaller companies also diligently working on space-industry solutions.

Instead of comparing the new space race to the Cold War-era rivalry between the United States and the Soviet Union, Kapoor thinks it’s more similar to the 1990s-era battle for the internet. That competition created rapid, wide-scale progress for all. Now, the government agencies that once led the space race now serve as a sort of business incubator. Blue Origin, SpaceX, and Virgin Galactic are going where no private organization has gone before, so there is no precedent.

“I see what SpaceX is doing, what Amazon is doing, as giving us more shots at the goal, more experimentation, more innovation,” Kapoor said. “And once we create value, which is presumably in the next three to 10 years, that’s when the competitive issues become much more relevant.”