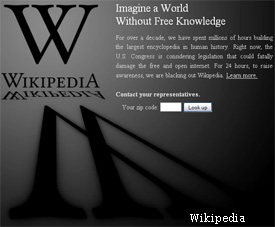 The lights have gone out — temporarily — at Wikipedia. At midnight Eastern Standard Time today, the English edition of the well-known online information source began a 24-hour “blackout” to protest two bills under consideration in Congress: the Stop Online Piracy Act (SOPA) and the Protect IP Act (PIPA).

The bills are aimed at stopping the spread of copyrighted material across the web and would prohibit search engines from referring users to sites that either host or link to pirated content, including videos, music or text. They would also enable individuals or companies to take legal action to stop the unauthorized use of their content and sue copyright infringers. Wikipedia, Google, Reddit (a social news website) and others have issued statements against the proposed legislation, viewing it as a form of censorship. Reddit followed Wikipedia’s lead and blacked out its site for the day. Google’s site remained live, but the company placed a black box over its logo to draw attention to the issue.

While many would agree that content creators deserve their due, opponents of SOPA and PIPA — including free speech advocates, technology companies and investors — argue that “the bills would stifle online innovation, violate the First Amendment and even compromise national security by undermining the integrity of the Internet’s naming system,” according to The New York Times.

“Balancing the rights of content creators, consumers and Internet providers is a delicate operation,” notes Kendall Whitehouse, director of new media at Wharton. “Unfortunately, in their current form, SOPA and PIPA are rather like using a meat axe where we need a deftly handled scalpel.”

“Reading [these bills], one would think that no one pays for digital content,” Werbach writes. “Yet we know empirically that the market is thriving. Anecdotally, too. Ask a roomful of college students if they’ve obtained digital content through unauthorized means. Every hand might go up. Then ask whether they also pay for those very same forms of content. You could get the same response.”

Werbach cites Apple, Hulu, Netflix and Pandora, among others, as examples of companies that are “monetizing digital content in unique, creative ways, while sending licensing fees back to the record labels and other content owners. Even licensed mobile ringtones are a $2 billion global business.

“The market isn’t perfect,” Werbach concedes. ” It is a challenging time to be in any kind of content industry. We must accept, however, that the Internet genie will never go back in the bottle. It’s time to build upon the successes of digital distribution, rather than imposing ever wider spheres of legal liability.”