The global agriculture industry is undergoing dramatic change. Shifting consumer tastes are combining with deeper supply chains and the latest technologies to create dramatic new opportunities – and risks, including those from climate change. China’s Belt and Road Initiative is just one notable example of the dynamics already upending the old order. But what are the big challenges entwined in all of this change for producers, distributors and retailers, and how can the risks be hedged?

The authors of this opinion piece offer some insight. Michael Ferrari is managing partner of Atlas Research Innovations and is also on the faculty advisory committee for the Wharton Initiative for Global Environmental Leadership. His work focuses on the technology-environment-infrastructure nexus, emphasizing global commodity strategy, and data science and analytics. Parag Khanna is the managing partner of FutureMap. He is the author of the new book The Future is Asian. Part 2 of this series will examine some of these risks and offer thoughts for the road ahead.

A few weeks ago, Tropical Cyclone Fani, the most powerful storm to hit India in two decades, made landfall along the subcontinent’s eastern coastline. Immediately, the humbling effects of the awesome power of wind and water had become all to evident. Homes and structures destroyed, lives lost, business disrupted, and logistics to transport food in and out of the region have become severely compromised.

The effects of Fani continue to impact the lives not only of those living in India and Bangladesh, but also those situated upstream and downstream. At the same time, if you hop on a flight from this crisis zone to China’s capital, Beijing is dealing with the domestic and global effects from an outbreak of African Swine flu on its pork supply, armyworm pest infestations impacting grains, oilseeds, and cotton, and their impact on the feed market.

Despite the best efforts of forecasters in predicting such events, we can never be fully prepared when such acts of physical power or biological opportunism bear down on humanity. What we can do, however, is hedge these risks, and one way to do this is through expansion of supply and trade networks through decentralization and cooperation.

The Next Global Transformation

In late 2018, the U.S.-China trade war got serious. In response to the Trump administration’s tariffs on Chinese steel, solar panels and washing machines, China raised duties on American soybeans. While China knew how to hit American farmers where it hurts, there was a particular irony to this move given that soybean cultivation began in China 5,000 years ago, and now China was making it more expensive for its own consumers to buy a crop of which it has become the world’s largest importer. Beyond the irony, the unfolding trade war has now opened a window into appreciating how the entire global landscape of commodities — the organic building blocks on which our entire human civilization depends — is rapidly evolving in ways very few people properly understand. 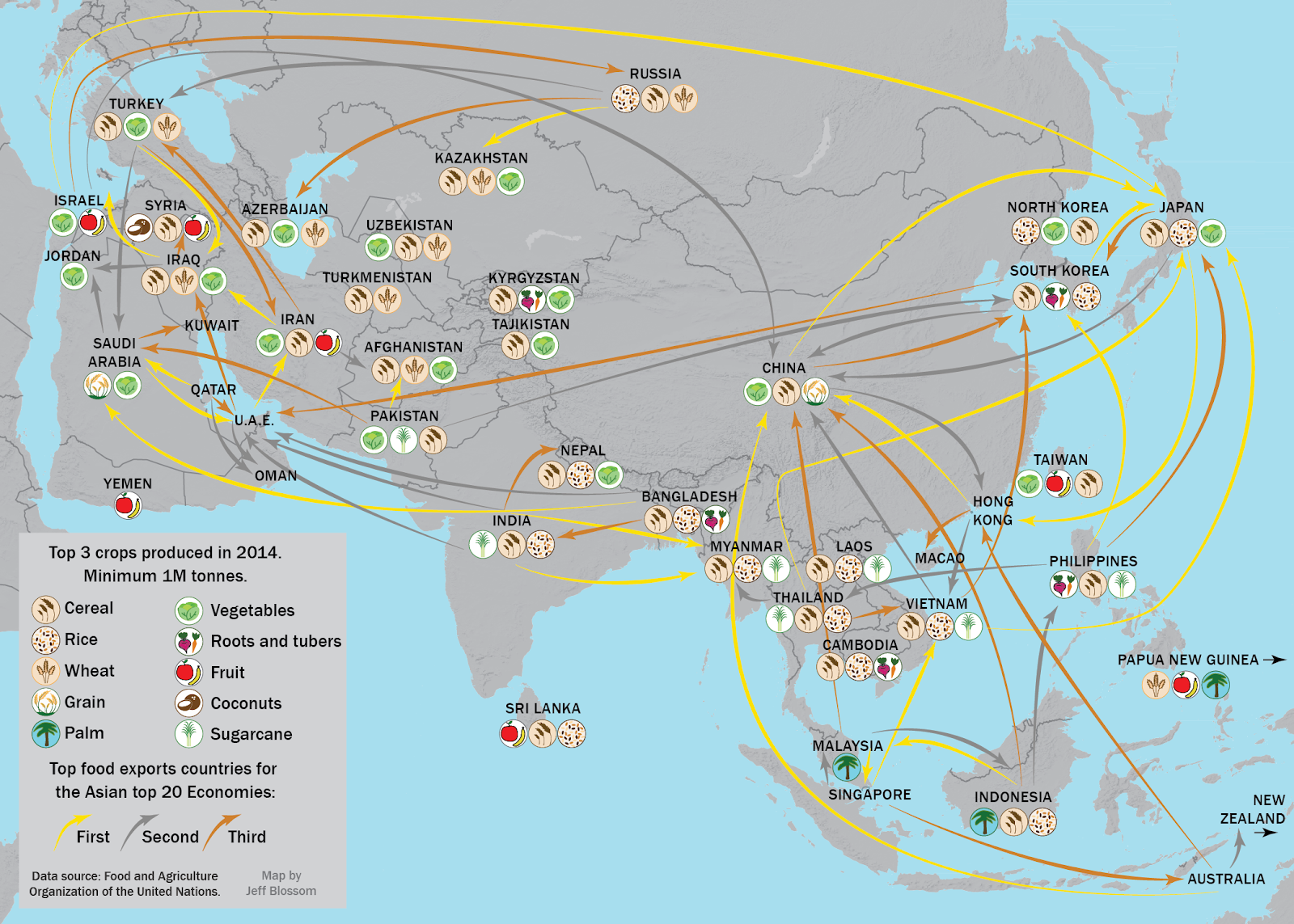 Perhaps more than any other commercial endeavor, the commodity complex arguably holds the distinctive position sitting at the cornerstone of global economic activity. At the most basic level, everyone needs to be nourished, otherwise they die. Our vehicles need fuel, otherwise they won’t move. Our homes and offices need power, otherwise there will be no light, heat or cooling. Commercial commodity products can be converted for the consumer into either food, fiber, energy, materials or in some cases a form of currency.

Taking this line of discussion further, agriculture, by definition, is much more than just ‘food.’ The global agricultural value chain includes all of the suppliers, distributors, processing facilities, fertilizer manufacturers, chemical input providers, forestry companies, pulp plants, solid waste facilities, transportation conglomerates, and many other entities that factor into our supply and demand balance sheets. A proper analysis of global agriculture also encompasses energy and water.

It is this comprehensive agro-energy industrial complex that is undergoing radical disruption. China’s ever-growing Belt and Road Initiative (BRI) represents the next chapter in global commercial expansion, with more than 80 member-states convening in Beijing in April to advance the coordination of trillions of dollars of infrastructure spending across the Afroeurasian realm that contains nearly six billion people. From ports and pipelines to power plants and railways, the new Silk Roads are being resurrected as never before — and have already brought about enormous shifts in how and where goods are circulated across the world — with an even deeper overhaul in the global supply chains of commodities and material goods yet to come.

The way agricultural products move from their geography of origin to the table of the consumer has changed dramatically over the last several decades. As borders have opened and middle-class incomes have risen, the demand palate has also expanded. Rising incomes not only mean greater demand for protein, but consumers now want to access more varieties of food, regardless of where it was cultivated. Consumer demand has thus actually become a supply-side problem for an industry already operating on tight margins. With bulk commodity production and distribution already a razor-thin margin business, those players who don’t adapt won’t survive.

The United States is by far the largest soybean producer in the world; Brazil is a not-so-close second. As the top producer, American growers rely on exports to drive the soybean economy, and naturally looks to the world’s largest consumer, China, as a customer. But when U.S. tariffs on Chinese goods were implemented last year, China responded by reducing soybean imports from America to zero, literally.

The Chinese are still buying soybeans; Brazil filled most of the gap. And the U.S. is still selling soybeans, albeit at a reduced premium and to other customers (including Brazil, which has re-exported them to China). Even as China makes promises about restoring substantial soybean purchases from the U.S., the episode has shed light on the sprawling global commodities trade and large-scale shifts in buyers and sellers that have major ripple effects on global agricultural supply chains.

The Belt and Road story represents an even more fundamental and relentless shift in global agriculture patterns. The new Silk Roads are opening up both large new quantities of imports from, and exports to, buyers and sellers of Russian wheat, central European sugar beet, Chinese grains and oilseeds, South Asian cotton, and other key commodities. China’s investments in Ukrainian wheat have been so substantial that Ukraine has declared 2019 the “Year of China.”

Similarly, the Maritime Silk Road Initiative will spur an increased flow of goods from East African origins including tea, coffee and grains, as well as revamping the sugarcane, palm oil, and biodiesel trade with Southeast Asia at the epicenter. The food trade between Southeast Asia and the arid Gulf countries across the Indian Ocean has grown by leaps and bounds in the past two decades.

“The Belt and Road story represents an even more fundamental and relentless shift in global agriculture patterns.”

The seemingly insatiable middle-class demand for protein will force supplier diversification, but what happens when there is a hiccup with respect to the world’s top provider? As China’s production is more than double the aggregate output from the European Union, events such as the African Swine Flu attack will open up distribution opportunities for many smaller suppliers such as South Korea, Vietnam, Japan and the Philippines.

BRI expansion will only facilitate trade among these origins, and ‘robusify’ the global supply chain in the face of acute supply shocks. For these and many more reasons, expect additional material transport and trade routes to open as the reach of the BRI grows over the coming few years.

If we borrow a page from modern portfolio theory, diversification of assets acts as a hedge against poor financial performance resulting from external market forces. Applied to agriculture, securing a multi-origin suite of technological enablers in the face of drought, disease, demand and climate disruption, will help to keep supply flowing when one or more catalysts threaten the physical market.

Many of these evolving and emerging technologies augment suppliers’ ability to produce a crop in the face of such challenges, while also serving to lower the barriers to entry for newer or smaller origins on the global agricultural stage. This leads to supply decentralization, which, as we see in finance, acts as a global hedge against supply disruption. The agricultural beneficiaries of BRI enabled suppliers to spread the risk against deficits in supply.

Technology-enabled risk management is emerging, and a few sectors stand to benefit more quickly such as aquaponics/hydroponics and data analytics. Food producers and distributors employing a combination of these tech domains have the potential to capture market share without the typical ramp-up time that can be associated with more traditional technology cycle deployments. Aquaponic/hydroponic technologies have been in use for decades, but we have seen a surge in their commercialization, particularly those with roots in water-stressed areas. This has more to do with open borders than it does with the technology curve, but the timing is right for agriculture players to capitalize on lower production costs combined with larger reach.

“Among the threats to food production and distribution that warrant a fresh take on climate-related supply disruption, we include physical, financial, water, disease, technology and contagion risks.”

When we think of data-driven businesses in agriculture, the hardware side comes to mind: weather stations, satellites, plant sensors, Internet-of-Things and so forth. Large industrial technology companies such as Siemens have developed AgPods, large and mobile vertical farming units that use IoT sensors to constantly monitor and optimize crop yield. Benson Hill biosystems in the U.S. uses machine learning to simulate potential cross-pollinations of various plant species, accelerating by half the pathway to developing new seeds for farmers. And Indigo Ag is infusing a data driven approach to food and fiber, which touches every stage in the agriculture value chain between seed and product.

While these are all in their own way helping to make the food chain more robust, we can go much deeper with respect to data. Embedded in agriculture are inherent properties which, perhaps, make the category among the most nuanced with respect to the nature of the underlying business drivers. Every region of every country has endemic characteristics related to what they eat, many of which are tied to evolution and culture as well as to necessity.

Food, therefore, is the conduit to not only preserve what is unique from origin to origin, but also to expand to new destinations as the notion of homeland erodes. Along with this edible diaspora comes new markets and new customers, and the potential applications of data-driven commercial opportunities as they relate to every step of the food chain from genotype/phenotype selection to destination, are innumerable.

As the BRI expands its reach, we need to examine how potential changes in the global climate will dictate future supply lines, and how climate driven consequences will interact with other risks to the agricultural value chain. Among the threats to food production and distribution that warrant a fresh take on climate-related supply disruption, we include physical, financial, water, disease, technology and contagion risks.