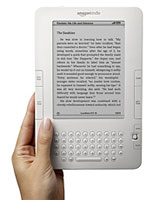 For publishing, 2009 may go down as the year of the machine.

Consider Amazon’s electronic-book reader, Kindle. Though the first version launched in late 2007, a lighter, faster, cheaper version went on sale this spring. And while the online-only retailer doesn’t release sales figures for the reader itself, its cultural impact was clear by late July, when USA Today announced it would include Kindle editions in its popular weekly list of best-selling books.

With slightly less fanfare, 2009 has also seen the emergence of the Espresso book machine, which will make its New York bookstore debut this fall, having already popped up on campuses in several states. Where Kindle offers consumers a chance to buy some 350,000 books at the touch of a finger — and then read them electronically — the Espresso allows them to print a professional-looking paperback book in about the time it takes to drink a cup of coffee.

At first glance, the machines are diametrical opposites — physically, economically and philosophically. The smallest Kindle weighs 10.2 ounces. The Espresso weighs in at about 800 pounds. The cheapest Kindle costs $299. The cheapest Espresso, produced by On Demand Books of New York, goes for at least $75,000. The Kindle is all about virtual books and online transactions. The Espresso is about physical objects that consumers buy in person.

Yet Wharton faculty who follow the complicated, emotionally fraught subject of how we buy and sell literature say the two devices share something even more important: A role in upending longstanding customs in the slow-to-change business of publishing.

In an industry where inventory problems and overprinting of books is a perennial money drain, the Espresso’s premise — not paying production costs until a reader buys a copy — is a revolution. And in a business where the cumbersome task of routing books to your local bookstore has been a continuing burden — not to mention a risk, since the book may be sitting on the shelf for years — the idea of cutting out the supply chain represents a major development.

“Inventory waste and/or printing time are very important drivers of profitability — maybe the key drivers,” says Wharton marketing professor Eric T. Bradlow. “Now the marginal cost of production is zero and the cost of inventory is zero…. The impact that technology has had in both of these cases, whether it’s a Kindle or some sort of print on demand, is that it has increased the opportunities we have to interface with content.”

For consumers, the new ways to buy and read books — and the new price points at which to do so — represent a rare expansion of the playing field. “Both [Kindle and Espresso] are great for bookselling,” says Wharton marketing professor Yoram (Jerry) Wind. “They basically expand the range of choices that people have. What we must keep in mind is that markets are heterogeneous. There are many segments, and people’s preferences may vary depending on the situation. What we have here is technology offering more options. Some people, especially younger people, may find Kindle terrific. Print on demand is a great solution for people who would like to have a hard copy. They’re not mutually exclusive.”

The book business has always been more important for culture than for the economy. All the same, moving beyond five centuries of Gutenberg-style production raises questions about how consumers determine value, what they want to read and even how much shelf-space home-builders should design for the living rooms of tomorrow.

For instance, says Joseph Turow, who studies new media as a communications professor at the University of Pennsylvania’s Annenberg School, many readers are subconsciously affected by knowing that the book they see in a store was produced and shipped at significant expense by a major company — a sign that someone who knows the business saw fit to invest in the author. “A large part of the problem is psychological,” says Turow. “The fact that publishers have to pay a lot for making a book is kind of a gate to ensure that it has value…. I think the fact that there’s a physical copy that has to go through hoops is part of how people judge the value of something. And that is going to be with us for a long time.”

But just how long a time is open to debate. “There are real generational differences,” says Wharton marketing professor Patti Williams, who studies the role of emotions in decision making. The rapid decline of news media brands, for instance, suggests consumers of other forms of media have been able to move beyond long-established hierarchies. “Look at what’s happening to readership of newspapers and magazines,” she says. Many of those readers are turning to blogs, and in doing so they are saying that they do not “rely on some third party to validate” everything that they choose to read.

Indeed, the rise of Amazon as a vendor of actual, physical books has already slashed the authority of those publishers who could afford to get their titles into distant bookstores: Online, it’s as easy to buy an obscure tome from a small imprint as it is to buy the latest major-publisher blockbuster. As a result, consumers can navigate not just the annual offerings of the big firms, but the entire list of extant titles — the so-called “long-tail effect,” a term derived from the shape of a graph of long-term book sales. Back when bookselling was the province of comparatively small local stores, the season’s big sellers represented a hefty portion of total sales. Thanks to the Internet’s ability to supply massive variety to consumers, today’s market sells many more titles, but fewer copies of each one.

“There still is the ability to develop reputations,” notes Bradlow. “It could be the author; it could be the online publisher. You’ll see a growing importance of testimonials. You’ll see a lot more information — the rank of it [on a bestseller list like Amazon’s] and so on. One of the things we’re studying is how does that information affect consumers’ perceptions. All of these things are to replace the external brand markers…. It’s the million-dollar question.”

How consumers might consider a book that doesn’t involve physical production also factors in the research of Wharton marketing professors like Cassie Mogilner, who studies time, happiness and decision-making. “Books in themselves have value from two different [sources],” Mogilner says. “One is the time you spend absorbing the content. Two is from the ownership of the physical object. And the physical object serves as a visual cue — both to yourself, of your reading, and also to others. People have collections, a kind of visible bibliography of what you know. What’s interesting with the Kindle is that its value is really just the first value. It doesn’t carry the same collection or visual cue.”

The speed with which consumers can get a Kindle or Espresso version of a book may also shape their perceptions, adds Mogilner. Espresso can print a book in about four minutes. A Kindle download is even faster. “Spending the time is a very meaningful personal expenditure of resources. When you lessen the time, you lessen the sense of value.”

Whether Kindle users who are especially enamored of a particular book will then go out and buy a physical copy — as do the statistically significant number of people who buy DVDs of beloved movies they don’t necessarily plan to watch again — will say a lot about how an increasingly virtual-media era considers physical objects, says Mogilner. If people originally read a book on Kindle and find that it’s a great experience, “will they later go back and buy it to have on their shelves?”

The answer to that question, in turn, might even shape decisions as far-removed from book publishing as the interior design of new houses. Today, many people give pride of place to book collections, buying or installing vast numbers of shelves to help themselves do so. “Part of it is a symbolic kind of thing,” says Wharton marketing professor Americus Reed II, who, with Williams and two other colleagues, uses Kindle as a “mini-case” in the school’s core MBA marketing strategy course. “[When] you walk into somebody’s house and look at their bookshelf, you can get a quick impression about a person based on the contents of the shelf. Those sorts of social signals are going to be important to people.”

Of course, displaying LP records or CDs used to be important to people, too, notes Wharton marketing professor Stephen Hoch. “There are plenty of things that we would not have thought would be disappearing. I worked in the record business. It has totally withered away. It’s taking radio with it.” These days, furniture stores don’t feature nearly the number of CD shelves and media cabinets that they once did. “For most young people, it’s not even something they think about. They lead their life in a different way.”

Peter Fader, co-director with Bradlow of the Wharton Interactive Media Initiative, isn’t a big fan of either machine. He believes the Kindle is doomed to go the way of other single-use machines in an age when cell phones double as cameras, personal computers and music players. “The Kindle is a clunky, awkward device. It’s basically a placeholder until the next generation of iPod Touch comes along. The only thing it has going for it is the e-ink [screen]. You can read it in the sun. Great. But otherwise it’s a terrible device, waiting to [become] obsolete.”

And as for Espresso, he says the cost savings for publishers who no longer have to pre-print and distribute books is also a mere placeholder until electronic readers — embedded in an “iPod on steroids” — become universally used. “People who want a thing to … put on their shelf … are going to want absolute tip-top quality. And while print on demand keeps getting better … it’s still not the same. So it’s just filling a niche for people who want to hold something.”

Nonetheless, Fader believes Amazon won’t regret its investment. “The business model, what Amazon has done, is brilliant,” he says. “The millions they will lose on the Kindle will be offset by the millions they will make on the subscription service.” Money-losing illegal downloads preceded the idea of paying for electronic versions of music. But the machines of 2009 have ensured that the idea of shelling out money in exchange for non-traditional versions of a book has taken hold without competition from free, illegal versions.

Now, Fader says, it’s up to publishers — traditionally so dependent on wooing tastemakers from established book reviews or popular radio programs — to figure out marketing approaches for their new distribution model. His suggestion: Start crunching the online numbers. “There’s great data available, and they haven’t embraced it,” he says. “But as they start becoming, or claiming to become, more customer-centric, they ought to know not just how many copies in the aggregate a book will sell, but which kind of people [will buy it] and so on. You can’t even name anyone [in publishing] who does anything along the lines of what Netflix does.”