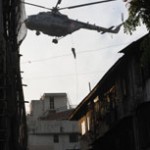 The CEO of Tata Advanced Systems, Lieutenant General Davinder Kumar, said he wants his company to become the next Lockheed Martin by building a new defense-oriented business in the coming decades.

India has to retool its whole navy and air force, and spending for homeland security is rising fast too, Kumar said at the Wharton India Economic Forum last week. The country is aiming both to import large amounts of defense equipment and to lay the groundwork for producing more on its own. At present India produces about 30% of its defense goods domestically.

That India is beginning to flex its muscle in defense underlines the county’s fast-rising economic power and perceived increases in security threats.

Tata Advanced Systems already is in a joint venture with Sikorski Aircraft to build military and civilian helicopters in India. The two-year-old partnership ended the monopoly on domestic production held by India’s state-owned Hindustan Aeronautics. In addition to meeting some domestic needs, Tata is also  exporting some aircraft cabins, Kumar said, which will help to finance new production capabilities at home.

These initial forays are expected to lead to decades-long relationships with foreign contractors in which defense production will move from a transactional basis to more joint-venture-like arrangements, Kumar pointed out. That should allow the kinds of technology transfer India needs to develop the specialized skills typical in many parts of the complex, high-tech defense industry.

And that could mean “hundreds of billions of dollars” worth of business over several decades for foreign defense contractors who cooperate with India in creating a sophisticated, domestic defense production capability, Kumar, said. For example, a bid for 126 fighter jets worth about $10 billion that India has on tender now could lead directly to additional deals up to “$40 billion or $50 billion.”

As an example of how defense programs could be mutually beneficial, Kumar pointed to Boeing, noting that it “outsources 93%” of its work. India could become a bigger part of those supply chains and also a bigger Boeing customer. Right now, Boeing is expecting about $14 billion in defense contracts from India for jet fighters, helicopters and reconnaissance planes. Boeing is among the companies bidding on the $10 billion contract for those 126 combat planes and it is also bidding on a $650 million contract for 22 attack helicopters and another $700-million contract for 15 cargo helicopters. The U.S., meantime, says it is open to having India participate in the U.S. Joint Strike Fighter program and might allow purchases of its fifth generation F-35 Lightning II stealth fighter.