Deflation Fears: Could Falling Prices Let the Air Out of a Recovery? - Knowledge@Wharton

Deflation Fears: Could Falling Prices Let the Air Out of a Recovery? 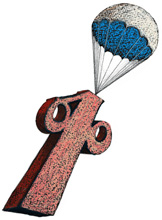 When computers and flat-screen television sets get cheaper, most people are happy about it. But real deflation — an across-the-board decline in prices and incomes — is another matter. It was one of the horrors of the Great Depression.

The term has been showing up in the news this spring, as economists spot deflationary trends in the United States, much of Europe and parts of Asia. Is deflation on the way? If it is, how bad will it be? Experts are far from unanimous on the first question, with some arguing that deflation could be widespread, while others insist an economic rebound and government stimulus efforts make deflation less likely.

Among those who do think deflation has arrived, or will soon, few expect it to be serious. Many concede their forecasts could be off, underscoring the deep uncertainties about economic conditions today, and some say they worry less about deflation than the opposite, a surge in inflation. “I think we are going to avoid outright deflation,” says Wharton finance professor Jeremy J. Siegel, noting that last year’s free-fall in oil and other commodity prices has ended.

Recent reports have shown wages holding up well in the U.S., undercutting one of the forces that can drive deflation, adds Howard Pack, professor of business and public policy at Wharton.

Japan, the United States and Spain have registered slight consumer price drops recently. But all those are declines of less than 1%, compared to a nearly 25% drop in the U.S. during the Depression years of 1929-1933. On May 11, China reported a 1.5% CPI (consumer price index) decline for April, the third straight month of falling consumer prices, while wholesale prices fell 6.5%. But most economists are unfazed by the price declines reported recently, noting other signs of economic turnaround. Many point out that such declines are to be expected because figures from the year prior reflected high fuel and food costs.

“The economy is starting to turn around,” says Wharton finance professor Marshall E. Blume, who cites the slowing pace of new unemployment claims as evidence that deflation is not a serious threat. The recent drop in gross domestic product was primarily due to a cutback in production as suppliers drew on inventories instead of new production, he asserts. With inventories down, demand should push prices back up.

Others think deflation is more likely. “I’d be very surprised if Japan didn’t have a deflation problem,” says Franklin Allen, professor of finance and economics at Wharton. “I think it’s quite likely in Europe and the U.S.,” he added, citing the rapid fall in inflation. He interprets the decline in gross domestic product to be a signal that manufacturers have “huge excess capacity,” which equates to an excess of supply that can help drive prices down.

Coupled with falling demand due to rising unemployment, these factors could make deflation a serious problem in the U.S. and Europe, Allen contends.

Mauro F. Guillén, professor of international management at Wharton, expects deflation to spread, but does not think it will be serious. Most price declines have been mild, he notes, and the huge levels of government spending in the U.S. and elsewhere should eventually trigger enough demand to drive prices up.

Some surveys show that economists expect the consumer price indexes to fall in the next few months, on a year-over-year basis, in the United States, United Kingdom, euro zone and Japan. But in a May 11 speech, Federal Reserve Chairman Ben Bernanke said the deflation threat is “receding,” though he added that it still bears watching.

Falling prices can be good, up to a point. But when prices fall across the board, businesses and consumers postpone purchases because they expect lower prices later, or worry their incomes will decline or don’t want to acquire assets that will fall in value. Shrinking demand forces sellers to cut prices further, triggering a vicious cycle. “It feeds on itself and it’s very hard to stop once it gets going,” says Pack.

Deflation is especially devastating to borrowers, because their incomes may shrink while their debts do not. The collapse of U.S. home prices is a prime example, leaving millions of homeowners owing more than their properties are worth. Unable to sell their homes for enough to pay off their debts, homeowners who lose their jobs cannot move to get new ones.

Though deflation was devastating in the Depression and became a serious problem in Japan in the 1990s, Pack says the threat to the U.S. and other developed economies has diminished because manufacturing and agriculture have smaller roles in the economy than they once did. “Manufacturing accounts for a relatively small percentage of expenditures in the U.S. now,” he says. Instead, the economy is dominated by service industries, and wages constitute their biggest expense, he adds, arguing it is harder for employers to cut wages than for manufacturers to cut prices.

Blume adds that one cause of the Depression was mismanagement of the Gold standard, which governed currency values. The gold standard was abandoned long ago. Other experts say government stimulus efforts should keep deflation at bay. Bernanke, they note, studied the Depression extensively as an academic, and appears willing to do just about anything to keep deflation from taking hold.

Indeed, a number of experts interviewed citied inflation as a bigger worry, as government stimulus money allows consumers and businesses to bid up prices.

While the Fed has made clear its willingness to reverse monetary policy when conditions warrant, political realities can get in the way when inflation fighting requires higher interest rates, says Wharton finance professor Richard J. Herring. “When it is time to tighten again, unemployment will almost certainly still be rising,” he says. “If the Fed tightens at the appropriate time, it will meet fierce resistance from Congress and borrowers.”

The worst case would be a repeat of the overly long low-rate policy earlier in the decade, as the U.S. was recovering from the dot.com bubble, Herring warns. The “political asymmetry” — the political preference for low rates over high ones — “is part of the reason we got into this mess.”

The best situation, according to Guillén, is a low level of inflation rather than none at all. “The ideal rate would be one consistent with sustained economic growth,” he says. The best inflation level depends on the economy’s growth rate, but the 3% to 5% range is generally healthy, he estimates. “In order to grow, you need to be aware of which new products or services are in high demand — and the symptom of high demand is rising prices.” The mechanism helps an economy distribute its capital efficiently, as products and services with rising prices draw investment dollars away from those whose prices are falling, he notes.

Up to a point, consumers and businesses benefit from rising asset prices. Homeowners, for example, can use home equity loans for spending money. “That is going to stimulate consumption and contribute to economic growth,” Guillén says. Of course, that can go too far, he notes. The house-price bubble of a few years ago gave homeowners plenty of spending money but came back to haunt them when the bubble burst. “Asset price inflation is okay, but if it turns into a bubble there is going to be a day of reckoning, and this is exactly what is happening now.”

The federal government is battling deflationary trends by keeping interest rates low and pouring money into the economy to encourage consumers and businesses to spend. While Guillén believes this will work eventually, a quick turnaround is hard to accomplish.

“Right now, in the short term, the situation is very weird,” he observed, noting that individuals and businesses prefer to use extra cash to pay down debt rather than to spend. Worried that potential borrowers are too risky, banks have been hoarding government stimulus money rather than lending it, as the government intends. “If you don’t lend it — if they keep it — then it doesn’t generate more demand.”

For the Federal Reserve, adjusting interest rates is “a very, very hard balancing act,” Guillén says, as making money too easy to get can spark a burst of inflation. In that case, the Fed would likely raise interest rates, though raising them too much closes the spigot on money the economy needs to grow.

Worried about deflation after the dot.com bubble burst early in the decade, the Fed kept interest rates low in 2003, 2004 and 2005, recalls Richard Marston, professor of finance and economics at Wharton. He argues this was an overreaction based on a mistaken belief that an economic slowdown was driving prices down in a traditional deflationary pattern, while the real cause was cheap imports from countries like China.

Keeping rates too low for too long fed the housing boom, leading to the financial crisis, Marston says. Now, government efforts to pour money into the economy should prime the pump for recovery, he adds, predicting that any deflationary period will be very moderate.

“I believe it’s going to be the consumer that leads us out of recession,” Marston says. “Most American families have cut back on spending, but not all of us have done it because our income has fallen,” he says, pointing instead to consumers’ worries about the future.

"Deflation Fears: Could Falling Prices Let the Air Out of a Recovery?." Knowledge@Wharton. The Wharton School, University of Pennsylvania, 13 May, 2009. Web. 18 May, 2021 <https://knowledge.wharton.upenn.edu/article/deflation-fears-could-falling-prices-let-the-air-out-of-a-recovery/>

Deflation Fears: Could Falling Prices Let the Air Out of a Recovery?. Knowledge@Wharton (2009, May 13). Retrieved from https://knowledge.wharton.upenn.edu/article/deflation-fears-could-falling-prices-let-the-air-out-of-a-recovery/

"Deflation Fears: Could Falling Prices Let the Air Out of a Recovery?" Knowledge@Wharton, May 13, 2009,
accessed May 18, 2021. https://knowledge.wharton.upenn.edu/article/deflation-fears-could-falling-prices-let-the-air-out-of-a-recovery/