In December 2006, Mumbai-based Tech Mahindra won India’s biggest outsourcing deal to date — a five-year, $1 billion contract from British Telecom to provide technical support. While the deal further underscores India’s rapid ascent in global business, it also signals a transition for the world’s “back office” from its current status as a provider of data processors and call-center workers to its new role in outsourcing high-end, knowledge-based skills. In this special report, experts from Wharton and Boston Consulting Group look at India’s move up the service value chain through KPO, or knowledge process outsourcing, as well as its increasingly successful forays into global manufacturing, driven by the emergence of a vast domestic market and the availability of low-cost, highly skilled workers. In addition, the report looks at India’s attempts to overcome the problems with power and infrastructure that have stood in the way of a sustainable GDP growth rate, as well as the key part that foreign investment and competition will play in the upgrade.

A Tale of Two Sectors: What Can Indian Telecom Firms Teach the Power Industry about Reforms?

In India, the road to better infrastructure has been bumpy so far: While sectors like telecom have boomed and transformed the business landscape seemingly overnight, others, such as energy, have been highly visible failures. According to experts at Boston Consulting Group and Wharton, the failure of power sector reforms and the success of the telecom industry underscore the importance of foreign investment and competition in India’s infrastructure upgrade. In a related sidebar, these experts discuss what’s next on India’s infrastructure agenda.

Indian BPO Firms Step Out of the Back Office, toward Knowledge Process Outsourcing and Beyond

At every juncture in the Indian outsourcing industry’s growth curve, its players seem to be discovering a changing array of new frontiers, beyond merely scaling up in their familiar territories. Interviews with experts from Wharton, Boston Consulting Group and outsourcing companies reveal that the industry is moving well beyond transaction-intensive services like call-center support or check processing, and now seems to have achieved critical mass in its quest to provide knowledge process outsourcing (KPO) services — where skills, judgment and discretion are the tools.

India in the Global Supply Chain: Can Domestic Demand and Technology Skills Help It Catch Up?

Bharat Forge Pulls Ahead of Indian Manufacturing, but Obstacles Lie Ahead

It’s a surprising fact: The world’s largest factory for forgings — parts for engines, axels and the like — sits not in Detroit, Tokyo or Stuttgart, but in the industrial city of Pune in western India. The factory belongs to Bharat Forge, foremost among a group of auto parts companies that are rapidly putting India on the world map for manufacturing. Yet, say experts at Boston Consulting Group and Wharton, Bharat Forge’s story also illustrates the hurdles Indian industry must overcome, ranging from weak infrastructure to low labor productivity. 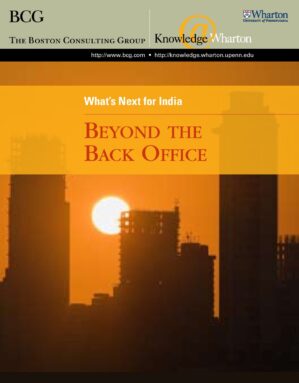