Private equity investors saw record yearly earnings in the boom years of 2005 to 2008 as easy access to financing led to ever-larger leveraged deals. Then it all came to a halt with the global financial meltdown. In 2009, PE firms with reasonable liquidity weathered a tough year as many put their portfolio companies through rigorous restructurings. This year, talk is slowly turning from retrenchment to opportunity, at least in the U.S. and Asia, according to speakers at a recent Wharton Private Equity and Venture Capital Conference titled, "A New Dawn: Investing in the Post-Crisis World." However, private equity managers remain concerned about the broader economic environment, particularly in Europe, where the PE market faced further contraction even before the most recent sovereign debt crisis hit.

For PE Firms, Liquidity Remains the Key Issue
With easy access to financing, large leveraged buyout firms grew to massive sizes during the private equity (PE) boom between 2005 and 2008, often with shares in deals valued in the billions. Now, following the global economic meltdown, speakers at the recent Wharton Private Equity and Venture Capital Conference, "A New Dawn: Investing in the Post-Crisis World," explored how the industry is faring. One speaker noted that, pre-crisis, there was a moment in time when "our industry forgot that we have to pay every penny of that debt." Another said PE firms are focusing on providing added resources to support their portfolio companies in today’s suppressed markets. One upside of the boom years: Much of the PE financing in place has few or no covenants, which gives companies some breathing room.

Private Equity: Part of the Crisis or Part of the Solution?
Panelists at the recent Wharton Private Equity and Venture Capital Conference considered whether private equity (PE) was a key contributor to the financial crisis — or a scapegoat — and also looked at what role it might play in a recovery. To the extent that PE has taken a hit to its reputation, the problem is one of communication, according to one panelist, because "it is difficult for the average newspaper reader to understand the role of PE in the economy." But another panelist argued that PE must "look in the mirror and admit we did over-lever and as a result overpaid. The benefit fell to the seller, not the buyer."

Expect Europe’s Private Equity Market to Contract
Dalip Pathak, head of Europe and India for Warburg Pincus, discussed the future of private equity and venture capital in his keynote speech at the recent Wharton Private Equity and Venture Capital Conference titled,  "A New Dawn: Investing in the Post-Crisis World." Although deal flow is starting to pick up, Pathak nevertheless expects the private equity industry to contract in Europe with fewer firms managing somewhat smaller funds. He described the fundraising environment in Europe as "tough," observing that "we are not in a situation of stable equilibrium." As a result of the rise of China, India and emerging markets, "we are in a very dynamic situation and it is going to stay that way," he said.

Private Equity Opportunities in Emerging Markets Could Help Offset a Slow Recovery Elsewhere
While the United States and Europe were hit hard in the global economic crisis, many emerging markets have fared better and private equity investors may be poised to benefit from new opportunities overseas. But these markets are in different stages of maturity and each has unique opportunities and potential pitfalls, according to panelists at the recent Wharton Private Equity and Venture Capital Conference.

Is China Private Equity’s Next Rock Star?
Watch for China to become the world’s center of private equity within five to 10 years, according to David Rubenstein, co-founder of The Carlyle Group. Paving the way for this top ranking are strong economic growth, myriad opportunities, little competition and a mostly laissez-faire attitude towards business. "When I’m in Washington, D.C., people are barraging me, [saying that] I’m not paying enough taxes…. In China, people want my autograph … private-equity professionals are like rock stars." 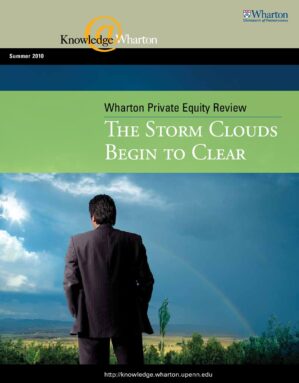