Water — Scarcity, Excess and the Geopolitics of Allocation

“When the well is dry, we learn the worth of water,” said Benjamin Franklin.

Much of the world has taken water for granted over the years, but that situation is quickly changing. Today, the use of this essential resource is being more closely scrutinized as shortages proliferate worldwide. Population growth, the rising middle class and urbanization increasingly are stressing existing resources. At the same time, water security and geopolitical stability depend on resolving global and local tensions affecting efficient and equitable use. This special report, based on a conference held in March and organized by the Joseph H. Lauder Institute of Management & International Studies, offers a comprehensive look at the potential challenges and solutions facing the future of water globally.

For example, estimates suggest that by 2030 almost four billion people — nearly half of the world’s predicted population — will live in areas with serious water shortages, mostly in Africa, Australia, East Asia, South Asia and the Middle East. Already, nearly 700 million people lack access to clean drinking water and about 2.8 billion face water scarcity during at least one month a year. Beyond drinking water and its role in food production, water is also essential for almost every source of energy — about 90% percent of all electric power generation is water-intensive.

So there is no shortage of challenges regarding water. Yet, a variety of technologies — from desalination to wastewater reuse, and from information-driven innovations to new market-based mechanisms — have the potential to improve efficiency and open up other solutions. More generally, sharing the world’s water wealth will require better management, infrastructure and technology but also delicate diplomacy, especially given the potential effects of climate change on the world’s hydrology.

The full report can be downloaded from this page as a PDF. 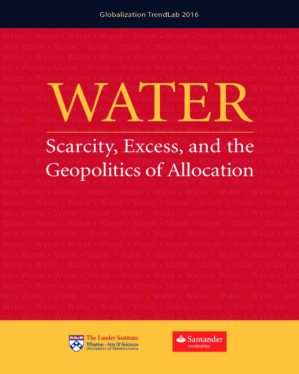