The Return of Japan, Inc.?

Japan’s economy, a powerhouse during the roaring 1980s, has been in the dumps since 1989. Today, however, signs are starting to appear that the world’s second-largest economy is waking up again. In this special report, which is being published in English and Japanese, Knowledge at Wharton presents insights from the Wharton Fellows program in Tokyo on issues ranging from the rebound of the Japanese economy to the strategies of companies such as Harley-Davidson and Yahoo! as they build their enterprises in Japan. The report also includes an excerpt from the book, “The Next Global Stage: Challenges and Opportunities in Our Borderless World,” by Kenichi Ohmae, published by Wharton School Publishing. Ohmae, who is based in Tokyo, has been described as “Japan’s most successful management guru.” 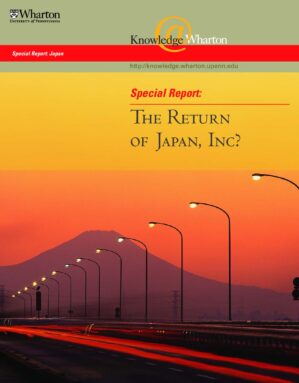