Time was when oil was being sold at $140 a barrel, and while consumers cringed at the high prices, the oil-rich nations of the Middle East prospered. The result was an economic boom that spanned industries ranging from financial services and real estate to tourism. Stock prices soared. Sovereign wealth funds snapped up choice assets around the globe. In late 2008, the oil bubble burst, the financial crisis began to roll across the world and boom turned to bust. How have the combined effects of the global slowdown and low oil prices affected the economies of the Middle East? In this special report, Knowledge at Wharton and Khaleej Times explore how businesses in the region are coping with today’s brutal reality.

A ‘Downward Spiral’: Gulf Region Real Estate in the Era of Cheap Oil

In 2002, oil prices in the nations of the Gulf Cooperation Council (GCC) stood at $25 a barrel. By July 2008, that number had jumped to $147. The increase enabled the GCC’s six member countries (Bahrain, Kuwait, Oman, Qatar, Saudi Arabia and the United Arab Emirates) to almost triple their gross domestic product — from $350 billion to more than $1 trillion. Now oil prices have fallen again — this time to below $40 a barrel — and the oil boom and bust have come at a steep price, especially for Dubai.

Kings of Cash: The Impact of the Global Financial Crisis on Sovereign Wealth Funds

The worldwide financial crisis has raised many questions about the efficacy and role of sovereign wealth funds (SWFs), the large, state-controlled investment funds typically carrying a mix of assets. Some of the largest funds reside in the Middle East, and in the wake of the financial meltdown, many of them have become risk-averse and are turning inward to stimulate their own slumping economies. Knowledge at Wharton asked Wharton faculty and other experts discuss this change in SWF strategy and what it means for long-term economic stability.

Time for Transparency: What Will It Take to Improve Corporate Governance in the Middle East?

As the financial crisis roils the world economy, scandals are surfacing in various parts of the world. In the Middle East, the latest scam to hit the headlines involves Nabil al-Boushi, an Egyptian broker who is accused of swindling investors in Dubai and has been termed the "Egyptian Madoff." As is usual in such circumstances, demands are being heard for improving corporate governance and financial regulation in the Middle East. This, however, is an enormous task. A 2008 survey found that barely 3% of publicly listed companies and banks in the region have good corporate governance practices. Can this situation be turned around? Experts from Wharton and elsewhere offer their suggestions.

As deputy CEO of Dubai Media and the youngest member of the United Arab Emirates parliament, Najla Al-Awadhi has quickly risen to prime leadership positions in a society that is still largely male-dominated. A graduate of the University of New Hampshire in the United States, she has been outspoken about women’s rights, and advocates a progressive yet culturally relevant media. In an e-mail interview with Knowledge at Wharton, Al-Awadhi talks about her own role models, why it’s still hard for women in the Middle East to break out of traditional gender roles, and what advice she would give the next generation of women business leaders in the region. 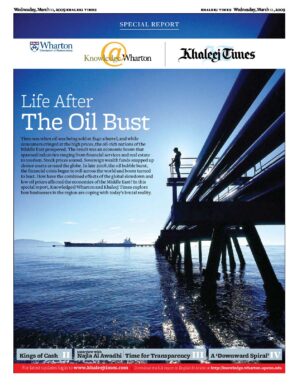