It will cost $3.6 trillion to repair and upgrade the nation’s infrastructure, but potential financial constraints are not the only obstacle to getting the job done. In the face of increasingly extreme weather, communities can no longer afford infrastructure that is simply fixed when it breaks. They need sustainable infrastructure that offers solutions that can keep up with contemporary climate challenges. Cities worldwide are increasingly turning to private-sector partners for the long-term investment and operational expertise these new solutions demand.

Sustainable infrastructure includes utilities that are designed to support a community that faces new economic, social and environmental challenges over time. In a way, they are future proof: designed and operated to be more resilient. And if they work within a public-private partnership (P3) framework, expertise is shared and deployed at scale. According to a PwC report, the “P3 pipeline now stretches across more than 20 states, including many that have never closed a public-private partnership transaction before.” With the number and size of P3s increasing each year and major infrastructure legislation anticipated on Capitol Hill, prospects for market growth in the U.S. are brighter now than at any time in recent memory.

Canada offers a model of how productive P3s can be, especially for these fundamental infrastructure projects. Over the past 30 years, more than 200 P3s have provided an average of $14 billion per year of economic activity in the country, according to a study by The Canadian Centre for Economic Analysis. Half of these infrastructure projects involve health care facilities, with CHUM, a medical complex under construction in downtown Montréal, as the biggest and one of the most environmentally innovative.

In the U.S., P3 projects in Honolulu and Philadelphia showcase what the expected boom in P3s can mean for sustainable infrastructure:

This special report takes a closer look at these projects, including their costs and benefits, in order to gain a better understanding of the kinds of challenges and opportunities organizations face.

Partners in Resilience: Constructing the Future of Sustainable Infrastructure 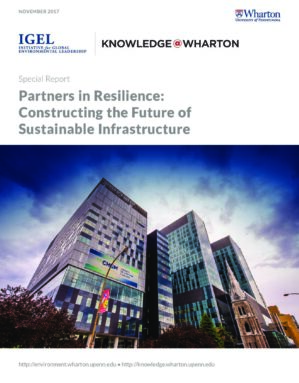