Transportation in the 21st century is entering a robust phase that mirrors the early years of the automobile, when gasoline, steam and electric technology vied for market share. Although electric cars led for a while, the internal-combustion engine reached dominance by 1920, with profound effects on American city-based public transportation — which atrophied as car ownership grew.

Today, urban transit is making a comeback, as is the electric car. Congested highways still face emission concerns, but consumers now often have the choice of light and heavy rail. Car sharing, which began as a European phenomenon, has prospered in U.S. urban centers, along with bicycle sharing, vanpooling and other options.

Government plays a major role in shaping efficient urban transportation systems. So far, regulations have proven an effective driver in the early development of new technology. But for ultimate success, environmentally friendly options also must satisfy consumers’ needs and meet economic goals. This special report, produced in coordination with Wharton’s Initiative for Global Environmental Leadership (IGEL), explores how cities are expanding their options for cleaner transportation, and how new technologies, innovations and incentives are revitalizing the sector.

American cities were designed for the private automobile, but they are evolving to accommodate other — and more efficient — forms of transportation, aided by advances in technology and progressive legislation. Cities are adopting congestion-pricing schemes, hosting car- and bicycle-sharing networks, linking neighborhoods with light rail and investigating regional corridors for high-speed trains.

Environmental regulation and funding are helping to revitalize urban transportation networks. Federal rules require a doubling of auto fleet fuel economy by 2025, and on the state and city levels, incentives are encouraging the replacement of polluting diesel trucks with electric versions. But consistency remains a problem regarding funding and incentives, which often are renewed only for short periods.

Hybrid and electric cars together are still less than 4% of the American auto market, but they are increasingly viable as alternatives to internal combustion models. Their short-range limitations and low-emissions status make them eminently suitable for urban settings, especially for car sharing and truck fleets. They also are the likely choice for the self-driving city cars of tomorrow. 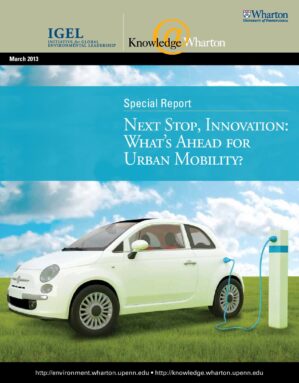