Manufacturers in China — whether foreign or domestically owned — face a series of key challenges in the years immediately ahead. Major tests involving product quality and safety, energy costs and environmental viability all come against the backdrop of a difficult world economy. Yet, while world demand for Chinese products has dipped in the short term, the long-term need to hold down costs while meeting shifting customer requirements has never been greater.

In this special report, experts from Wharton and The Boston Consulting Group look at how this growing list of challenges will change the way manufacturers must think about their operations in China.

Regional specializations have always existed in China. Tailors from the city of Cixi, for instance, controlled clothing manufacturing in Beijing for some 250 years. Now China has taken the idea to a new level by creating huge manufacturing clusters that specialize in a single industry or product. Thousands of manufacturers in Datang in Sichuan province, for instance, crank out more than six billion pairs of socks annually. But with a shifting world economy, expect manufacturing clusters in some sectors — such as simpler textiles and toys — to fade in importance, even as others, such as biotechnology, grow.

China has a wealth of advantages as a business innovator, including an adaptable population with an affinity for improvisation and reverse engineering, and a low-cost operating environment. Companies from developed economies soon will either profit from or compete against this developing culture of innovation as China moves beyond labor-intensive, low-value-added consumer goods.  But China is not an easy place for outsiders to be innovators, and companies from developed economies looking for R&D partners there must proceed carefully.

Raising the Bar: Can China Meet the Quality Challenge?

After being stung by consumer backlash and stiffer penalties for piracy, counterfeiting and contamination, China is working hard to overcome its reputation for poor quality. Many experts see quality issues as the simple growing pains of an accelerating economy. After all, China already makes high-quality products such as iPods. The challenge today for foreign partners: How to set and enforce effective quality benchmarks.

Chinese Manufacturing in an Age of Resource Price Volatility

China is slowly moving away from energy subsidy policies that hold down prices — especially for industry. Those subsidies protected exporters from devastation when energy prices shot up to record-setting levels in 2008 and helped to keep social unrest somewhat under wraps. No one knows for sure how far China will go in reducing energy subsidies for business in the future, but China could use subsidy policies as a tool in pushing particular industries away from low-value exports that generate a lot of waste to higher-value goods that produce less waste.

The skies over Hong Kong today are permanently gray, covered with smog from southern China’s factories — the same factories that have made China one of the world’s most important manufacturing hubs in just two decades. Now the government is shifting emphasis from economic growth at all costs to growth without a high environmental cost. Who will gain as China cleans itself up? Who will lose? And what opportunities will this historic shift in national priorities create? 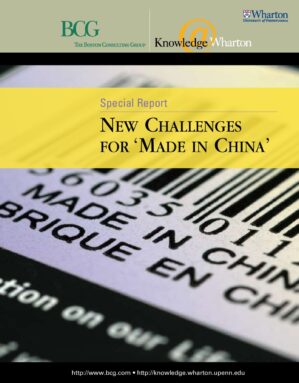