Japan is recovering from far more than the tsunami, the Fukushima nuclear disaster and the global financial crisis: It is also attempting to bounce back from two decades of economic lethargy. The country faced a similar period in the 1920s and early 1930s, leading Japan’s then-finance minister to loosen monetary policy, drive down the yen and increase spending. The economy quickly reversed course. Today, Prime Minister Shinzo Abe is taking similar steps. This special report examines the implications of Abe’s new economic policies and analyzes two problem areas — finance and higher education.

Japan’s ‘Abenomics’: A Last Ditch Effort to Turn the Economy Around
Economists are divided over whether Prime Minister Shinzo Abe’s efforts to “reflate” the economy — by stimulating stronger demand and creating a virtuous cycle of increased consumer spending and business investment — will actually work. Some experts believe that Japan will only achieve sustainable growth if it endures a deeper recession. This might force the country to make structural changes to deal with long-term issues such as its shrinking and aging population and fading industrial competitiveness. Others, though, are cautiously optimistic that Abe’s initiatives will pay off.

Global Currency Battles: A Waiting Disaster or a Win for All?
To many, Japan’s recent moves to devalue the yen looked like the spark that could ignite a global currency war — a series of competitive devaluations that, last century, helped plunge the world into the Great Depression. Until now, central bankers have been resisting the urge to politicize exchange rates. However, while currency skirmishes can be dangerous and require monitoring, they are also necessary for establishing equilibrium in markets and will help in the global economic recovery, some experts say.

Oversupply, Lax Standards Weigh Down Japan’s Higher Education System
Japan’s stagnating economy is dragging down more than just businesses and the lifetime employment system. Universities are also taking a big hit. For many, the dearth of students will mean bankruptcy. More generally, the Japanese higher education system is failing students — and its workers — through a full-blown case of bureaucratic sclerosis. 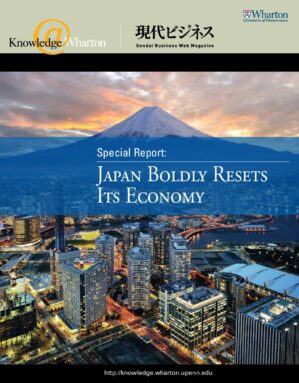