Israel faces a dual marketing challenge. First, similar to countries like Afghanistan and Iraq whose wars dominate the news, Israel’s public perception is marked by images of violence and conflict rather than ones suggesting stability and a hospitable business environment. This leads to the second marketing challenge, that of Israeli companies striving to attract investors and customers even as they contend with a tide of negative world opinion. How can a small but innovative country — with enormous expertise in fields such as technology and medicine — overcome this two-part marketing challenge? In this special report, Wharton marketing professor David Reibstein sets the stage by offering insights into both the opportunities and obstacles that Israel faces; David Pottruck, former CEO of Charles Schwab & Co. and now CEO of Red Eagle Ventures, joins Wharton marketing professor Yoram (Jerry) Wind to suggest ways that Israel can tackle its marketing challenge; and investment maven Michael Steinhardt explains his views of Israel and the role of the Birthright program in connecting youth around the world to their Israeli heritage. In addition, Better Place CEO Shai Agassi discusses his electric car project and the reasons why it took root in Israel, and venture capital expert Gideon Tolkowsky presents lessons in globalization based on the experience of Israeli firms.

Israel’s Image Problem and What to Do about It
In its 61-year history as a modern nation state, Israel has become synonymous with conflict and controversy, creating friction with hostile neighbors and, at times, setting itself up as a target for international reproach. But is Israel getting short shrift? Have Israelis been letting themselves down by failing to showcase their strengths? In an interview with Knowledge at Wharton, Wharton marketing professor David Reibstein explores the consequences of Israel’s tarnished reputation, not only for the country in general, but also for Israel’s business community, while also considering whether using better public relations and marketing tactics could improve Israel’s image.

A New Kind of Campaign: Changing the World’s Perception of Doing Business with Israel
Anyone who follows current events sees images of Israel that suggest a country defined by conflict and violence. Yet Israel has also made substantial contributions to the global marketplace in such industries as technology and medicine. The challenge for Israel going forward is to make the world more aware of its hospitable business environment. Marketing professor Yoram (Jerry) Wind and David Pottruck, former CEO of Charles Schwab & Co., and now chairman and CEO of Red Eagle Ventures, talked with Knowledge at Wharton about steps Israel can take to improve its image.

Michael Steinhardt Discusses Israel’s Place in the World
Following a high-profile career in finance in which he became one of the first well-known hedge fund managers, Michael Steinhardt began the Taglit-Birthright Israel program, a philanthropic enterprise which has provided free 10-day trips to Israel for some 220,000 Jewish youth to learn more about their heritage. Steinhardt spoke with Knowledge at Wharton about how the program helps to improve the country’s image and the challenges of what he calls a deteriorating educational system in Israel — marked by a brain drain in higher education. Steinhardt also discussed the country’s culture of business innovation and how deep democratic roots can sometimes slow progress.

Shai Agassi, Israel’s Homegrown Electric Car Pioneer: On the Road to Oil Independence
If there’s a poster child for Israel’s entrepreneurial spirit, start-up Better Place is one strong candidate. Since launching the company in 2007, Shai Agassi — a 41-year-old Israeli entrepreneur and former executive of software giant SAP — has been shaking up the auto industry with his vision for mass adoption of zero-emission vehicles powered by electricity from renewable sources. Starting off with $200 million of seed money, Better Place has since been setting up networks of service stations for electric cars, helping to wean drivers from their environmentally unfriendly gas guzzlers. The timing couldn’t be better: Nissan recently unveiled its Leaf electric car whose battery can power the car for up to 100 miles (160km) on a single charge. According to Carlos Ghosn, Nissan’s boss, pure electric vehicles could make up 10% of the world’s market by 2020. John Paul MacDuffie, a professor of management at Wharton and co-director of the International Motor Vehicle Program, joined Knowledge at Wharton to interview Agassi from the company’s headquarters in California about what it takes to develop an oil-independent future.

Globalization of Technology Ventures: Lessons from Israel
Technology is universal, and technology markets are relatively culture-insensitive. Still, the fact remains that surprisingly few high-tech startups that were conceived outside the U.S. or the world’s primary technology markets have evolved into global companies. Why is that so? In this opinion piece, Gideon Tolkowsky, principal of Israel-based BME Capital Management, who has been involved in venture capital in the U.S. and Israel for more than 25 years, offers some lessons from Israeli high-tech startups. 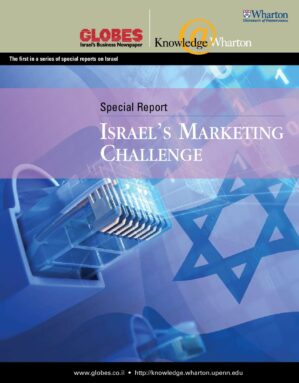