Nature wastes nothing. Human beings are less frugal. We have been generating garbage for thousands of years, and are only now starting to confront the reality that our waste streams are poisoning the planet. Governments have begun to regulate how we dispose of what we no longer want; large corporations are working to find sustainable solutions that are also profitable; and smaller “green” companies and non-profits are aiming for zero-waste-to-landfill, which may be as close as we can come to the example set by nature. This special report, sponsored by the Initiative for Global Environmental Leadership (IGEL) and Rubicon Global, looks at where we have been, where we are going and how we are getting there.

The Commercialization of Garbage

For much of human history, people have found ways to profitably reuse their waste. But the rising tide of consumerism that followed World War II brought with it TV dinners, disposable razors and an ever-changing stream of new gadgets, clothes and automobiles. It also began to fill the world with trash. Encouraged by environmental legislation, and financed by Wall Street, large corporations were created to make garbage disappear. Years later, and billions of dollars richer, these giants are looking for ways to join the “green revolution.”

The Elimination of Garbage

At the start of the 21st century, new companies began to tackle the environmental problem created by the country’s fast-accumulating trash. Rather than generating revenue from the use of their own landfills and other assets, these pioneers began creating profits for themselves by sharing savings with their customers. Data is at the heart of these approaches, which range from local to international. All are working to dramatically reduce, and possibly eliminate, the need for landfills.

Zero Waste: ‘Nil to Landfill’ Is Now a Practical Goal

The push to divert virtually all material from landfills and incinerators is strongest in Europe, but it has also gained a foothold in the U.S. Zero waste goals are increasingly being embraced by progressive communities and companies that see value in turning waste streams into profit streams. And with more than 70 extended producer responsibility (EPR) laws enacted on the state and local level, some with industry support, corporate America is becoming a partner in waste reduction. 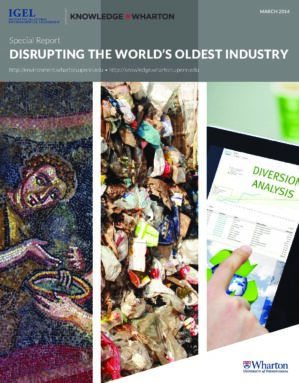