The third Festival of Thinkers brought together an array of Nobel laureates, well-known intellectuals and students from the UAE and neighboring countries to celebrate what Sheikh Nahayan Mabarak Al Nahayan calls “the power and importance of thinking.” Sheikh Nahayan is Minister of Higher Education and Scientific Research, and Chancellor of the Higher Colleges of Technology. The event, which took place November 1-4, 2009, in Abu Dhabi, focused on nine themes that are key to shaping the future of the Middle East and the rest of the global community. The themes touched on such challenges as “Moving beyond the Global Crisis,” “Envisioning Sustainable Development” and “Promoting Science and Technology.” Additional topics discussed included world health, the globalization of culture and language, development economics and poverty alleviation, and military spending, research and innovation, among others.

In this special report, Knowledge at Wharton offers insights into several of the themes included in the Festival of Thinkers conference.

An Arabic version of this report was published on November 1, to coincide with the opening of the Festival of Thinkers.

Throughout the developing world, infectious disease and chronic illnesses confront more than one billion people living in poverty. To make significant strides in global health, governments and for-profit and non-profit businesses must find a way to foster innovative, breakthrough solutions not only to treat illnesses, but also to improve the delivery of health care itself. Nobel Prize winners and global health care experts will be exploring these issues during a Festival of Thinkers panel titled, Future Well-Being: Towards a Healthier World.

The Post-recessionary Global Economy: In Search of the New Normal

The days of loose rules, easy credit and lax oversight, which led to excesses on many fronts, are ending. As the global economy climbs slowly towards recovery, two pressing questions remain: First, how do we prevent things from getting out of control again? And second, what is the so-called new normal? Speakers at the Festival of Thinkers in Abu Dhabi and experts at Wharton weigh in on both issues

Our Endangered Planet: How to Protect and Promote Sustainable Development

The title of an upcoming Festival of Thinkers panel, "Future Resources: Envisioning Sustainable Development," only begins to hint at the broad range of interconnected subjects that go into any discussion of sustainability — ranging from ecological concerns and population control to economic disparity and social disruption. Panelists will discuss the prospects for sustainability as societies move forward in an increasingly crowded world characterized by dwindling resources, continued poverty, civil wars and climate change, among other challenges.

Poverty alleviation is a crucial theme at the 2009 Festival of Thinkers. Poverty is defined as the "condition of lacking basic human needs such as nutrition, clean water, healthcare, clothing and shelter because of the inability to afford them." The strategy of encouraging companies to generate profits by producing goods and services for consumers at the Bottom of the Pyramid has emerged as an important weapon in the battle to end poverty. Five years after C.K. Prahalad wrote his book, The Fortune at the Bottom of the Pyramid, he explains the impact his ideas have had on companies implementing Bottom of the Pyramid strategies in an interview with Knowledge at Wharton. 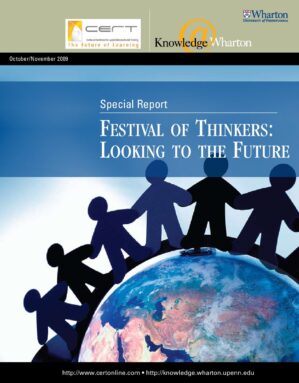