There are hungry people everywhere. The situation is most dire in the developing world, where the population is slated to increase sharply by 2050, and where there is neither enough food to feed the rapidly growing population nor the infrastructure to store, transport and distribute what food there is. Dramatic urbanization further complicates the picture. The situation is very different in the U.S., which produces far more food than its relatively slow-growing population consumes, but still has millions of residents who don’t know from day to day whether or not they will have enough to eat.

Common to hunger in both the developed and developing world are the twin scourges of poverty and, paradoxically, obesity (entrenched in the U.S., and rising fast just about everywhere else). But the specific challenges to feeding the hungry are different in the two regions, as are the most promising solutions.

Globally, beating the scourge of hunger is made much more difficult by climate change, which leads to weather extremes, and water scarcity — already a major problem in both India and China. Other challenging issues include food waste, which eliminates 24% of the food calories produced for human consumption; global conflicts, which create refugees and reduce agricultural output; and changes in what people eat that favor resource-heavy meat production.

Feeding the Developing World: The Search for Solutions

The first Green Revolution dramatically increased crop yields and averted the famine that was predicted for the developing world in the 1960s. Experts say that the world needs to increase those yields by another 60% to 100% by 2050 to feed a population that could reach 9 billion. The key to reaching those targets may lie in some major technological advances from both government at all levels and private donors.

The Struggle to Feed America

There are 49 million people in the United States who lack access to healthy food. The obstacles they face are many — multiple jobs and family obligations leave them with little time to shop or cook, and food deserts — the absence of food stores in urban areas — make fast food all too convenient, while the high price of more nutritious foods makes them unaffordable. Numerous programs are trying to help solve one or more of these challenges, with varying degrees of success. 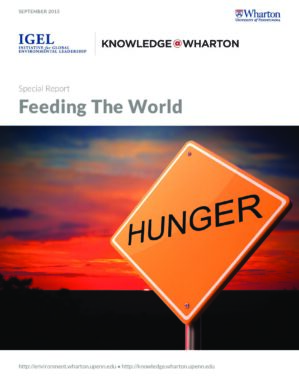