In the consumer markets section, readers can discover how the prevalence of smartphones in Latin America is revolutionizing the region’s taxi industry despite some of the most notorious traffic problems on the planet. They can also find out about China’s struggles to become more competitive in the world of professional football (or soccer, to Americans).

Also showcased is consumer investing, including the uncertain future of the young consumer-credit industry in Russia, and of Yu’E Bao, a unique money-market fund created by Chinese Internet giant Alibaba. On the food and beverage scene, articles address how France is rediscovering its beer heritage, while India’s rising whiskey consumption level serves as a mirror of its cultural changes. Another piece highlights the daunting challenges faced by Russian grocery retailers as they try to establish markets beyond the well-trodden paths to Moscow and St. Petersburg.

Infrastructure and planning is the subject of an article about Brazil’s aging airports and the effects of two major international sporting events on expansion plans. In the next section, we see that technology and innovation can power significant economic forces, as reflected in articles about e-commerce in Africa, technology startups in the Middle East and the robotics industry in Japan. “Clean” and “green” technologies are featured here as well, in articles about China’s cleantech industry and China’s and Morocco’s forays into solar energy.

The topic of emerging markets is one that touches nearly every article in the report, but particularly fuels an analysis of the role of French companies in emerging African businesses. Plus, private investment as a fledgling growth area is tackled in coverage of private equity in Russia and in Latin America.

Social impact is examined in the context of Peru and Colombia, countries in which poverty remains an overwhelming economic impediment. Another article looks at education trends, tracking how China’s student “brain-drain” appears to be reversing itself. And finally, two interesting economic business models are investigated to see how their success might be replicated elsewhere: South Carolina’s creative public-private partnerships and business-led organizations, and Germany’s “Mittelstand,” the relatively small firms quietly fueling that country’s export powerhouse.

The full report can be downloaded as a PDF from this page.

Grocers in Russia: The Challenges of Venturing Beyond Moscow

How France Lost – and Is Rediscovering — Its Beer Culture

Football in the Twenty-first Century: A Chinese Dream

Brazilian Airports: Investing to Catch Up with Growth

Technology Startups in the Arab World: The Wild West of the Middle East

Can Chinese Cleantech Boost Green Businesses in the U.S.?

Can Japan Keep Its Competitive Edge as ‘The Robot Capital of the World’?

How China Came to Rule the Global Solar Industry

Private Equity in Peru and Colombia: At a Crossroads

Private Equity in Russia: A Market Unlike Any Other

Social Impact in Peru and Colombia: How Do Companies Know Whether It’s Working?

The German Mittelstand: Slow and Steady Wins the Race — But for How Long?

Emerging Players on a Global Stage 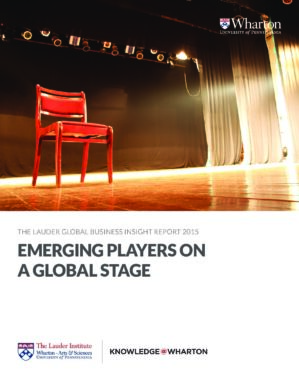