On March 11, 2011, deep below the surface of the Pacific Ocean, enormous seismic forces reached a tipping point. At 2:46 p.m., one of the earth’s tectonic plates suddenly shifted, thrusting violently underneath another. The North American plate was pushed upward with such force that the movement generated a massive tsunami. It took the wall of moving water 51 minutes to reach the coast of Japan, some 45 miles away.

In some places, the tsunami towered more than 125 feet above the ground when it hit. Thankfully, the height of the wave was far less where it came ashore near the Fukushima Daiichi nuclear power plant — “only” 50 feet high. Still, the nuclear disaster caused by the earthquake and tsunami has been rated by the International Atomic Energy Agency as equal in severity to the 1986 accident at Chernobyl, the worst nuclear disaster on record.

The complex catastrophe — earthquake, tsunami and nuclear meltdown — killed close to 20,000 people, displaced hundreds of thousands more and contaminated a large swathe of beautiful countryside for decades or longer. More than two years later, Japan is still struggling to recover and prevent even more devastation.

On May 24, 2013, the Initiative for Global Environmental Leadership (IGEL) sponsored a panel at the Wharton Global Forum in Tokyo to consider the leadership lessons generated by the Fukushima disaster, and to look at its impact on Japan’s energy policy and the resettlement of afflicted areas.

Lessons in Leadership from the Fukushima Nuclear Disaster

While the scale of the natural disaster in Japan was beyond the experience of anyone now alive, it was far from unprecedented and should have been anticipated, according to several post-Fukushima reports. Yet those in leadership positions failed to adequately prepare for the catastrophic events of March 2011. Unwilling to face up to the rare but predictable worst-case scenario, government and industry leaders were quickly overwhelmed by events. The judgments they made and the actions they took — or failed to take — often compounded problems. A close look at these mistakes offers valuable lessons for leaders facing disasters in the future.

Since the devastating disaster of 2011 exposed Japan’s major dependence on nuclear power, the country has announced a plethora of renewable energy projects. But can Japan, with few natural energy resources of its own, easily make the transition to sustainable sources? Is such a switch practical, and does the political will exist to do so?  In fact, Japan is developing robust wind and solar industries, but both face stiff challenges. And despite many misgivings, including more recent leaks of radioactive materials at the Fukushima Daiichi nuclear plant site, the Japanese government has pledged to rebuild the country’s large nuclear network.

A Tale of Two Storms: Rebuilding After the U.S. and Japanese Disasters

After major coastal storms in both Japan and the Northeastern United States, the question has to be asked: Should population-intensive development be rebuilt in areas subjected to repeated flooding and climate-related sea-level rise? There are no easy answers, especially when people have lived in those shoreline towns and cities for hundreds or even thousands of years — and emotions run high. Short-term political considerations almost always encourage rebuilding, but increasingly the case for subsidized relocation efforts is at least being made.

Disasters, Rebuilding and Leadership – Tough Lessons from Japan and the U.S. 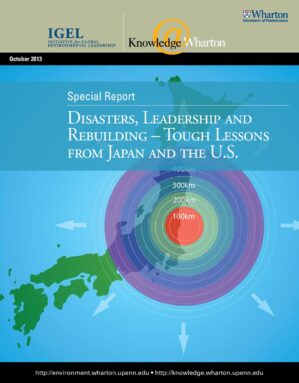