China’s remarkable story of economic growth is well-documented. Some 800 million people have moved out of poverty over the last 40 years thanks to market-based economic reforms. The annual 10%-plus GDP growth that dominated for years may have moderated, but the latest five-year plan calls for a still-robust 6.5% annual GDP growth rate.

Economic ambitions, however, have not become more moderate.

China’s “One Belt, One Road” initiative, for example, would stitch together roads, ports, railways and other links from East China through Southeast, and South and Central Asia over to Europe. It exceeds in scope the Marshall Plan that rebuilt post-war Europe. Beyond that, China is by far the biggest source of financing for many of its neighbors. The Export and Import Bank of China alone lent $80 billion in 2015, compared with $27 billion from the Asian Development Bank. All this expands China’s economic and geopolitical sway across Asia, the Middle East, Europe and Africa.

For now, however, the pace of reforms needed to push that process forward has been slowing and is unlikely to regain momentum until certain political cycles are completed in March 2018. What seems clear is that Beijing is committed to globalization, and to the integration of its markets and financial systems – but on its own terms, at its own pace. This includes transitioning from an export-based economy to a consumer-based one, and a deeper integration into global financial markets.

This report considers many of these issues and also offers a closer look at two sectors: retail, which is ground zero for any consumer-oriented transition; and high-tech, through the eyes of a company that wants to link-up Israeli tech innovation with Hong Kong investors and market it all into China.

As the experts interviewed in this report note, many Chinese have never owned a PC or had a fixed telephone line — mobile is their first internet connection. Leap-frogging old technologies has allowed many Chinese businesses to tear down entry barriers and grow rapidly. It has also helped China become an innovator in its own right. It is no accident that China has the world’s most advanced mobile payment systems.

Potential stumbling blocks remain, of course, and serious debt issues can be added to the list of needed economic and financial transitions already mentioned. But China continues to create big plans to deal with its massive challenges.

Where Will China’s ‘One Belt, One Road’ Initiative Lead?
China’s plan for a new Silk Road trade route from China to Europe is bigger than the post-World War II Marshall Plan. But will it work?

China’s Global Financial Integration: How Far and How Fast
Financial reforms in China lag far behind the country’s outsized impact on the global economy. As the country moves towards financial market liberalization, can it avoid
instability?

Is There a Match for Tech Between China and Israel?
Israel is famous for its tech prowess. China has deep pockets and is a tech innovator in areas like financial payments. Is there a match in the making?

Will China Become a Leader in Clean Energy?
China is the world’s biggest polluter, but it is investing aggressively in clean energy. What role will it play now that the U.S. has pulled out of the 2015 Paris climate agreement? 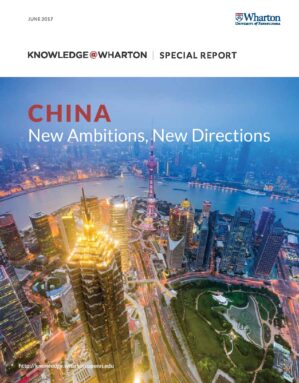