Multinational corporations increasingly see China as a vital part of their global operational network, but opportunities for discussing the challenges this poses are few. In this special report, experts at the Boston Consulting Group and Wharton weigh in on such issues as developing management talent, R&D operations, sourcing of high-tech and traditional goods, and logistics. In addition, the CEO of TCL, one of China’s largest global companies, discusses the problems his company has faced in going global.


The Changing Face of Management in China

CEOs and other senior executives at multinational corporations (MNCs) in the U.S., Europe and Asia are focusing more of their time and their companies’ resources on China, according to experts at the Boston Consulting Group and the Wharton School. Research by BCG suggests that the MNCs that have had the most success in China are those whose top managers have gone out of their way to stress the importance of their China businesses in relation to their global operations. At the same time, the managers on the ground in China are also changing. While expatriates still hold the most senior positions in China, Chinese locals are assuming a greater role in both middle- and senior-management ranks. In years to come, MNCs will face new challenges in their China operations: nurturing the growing number of more educated and experienced Chinese managers and leveraging their China operations in a way that contributes to their global competitive advantage.

R&D in China: The Next Frontier or a Sure Bet to Squander Intellectual Property?

Low costs may serve as a magnet to attract manufacturing to China, but research and development is not far behind. More and more companies — especially in the high-tech field — are setting up R&D bases in China and figuring out ways to integrate them into their global research operations. Given China’s notoriously porous intellectual property regulations, is this a recipe for disaster? Not quite, say experts from Wharton and the Boston Consulting Group.

Sourcing From China: No Longer Just for Shoes, Toys and Clothes

Twenty years ago it was widely believed that companies that wanted to source products from China were best off focusing on simple, labor intensive products such as shoes, toys and clothes. That was true – and it helped drive tremendous success for companies such as Perry Ellis, which targeted these product categories. Today, however, the sourcing landscape in China has changed. High-tech companies such as Dell, IBM, Philips, Samsung and Nokia are turning to China to source parts and products that demand sophisticated technology and considerable R&D. According to experts at The Boston Consulting Group and Wharton, companies that figure out how to take advantage of this trend can reap enormous rewards.

A decade ago multinational firms operating in China had to carry higher levels of inventory than comparable firms in the U.S. or Western Europe because the logistical challenge of moving goods around the country was enormous. Today, while matters have improved, gaps still persist as logistics capabilities lag behind the hectic pace set by the manufacturing sector. China is growing so fast that, in some regions, it’s straining the capacity of its roads, railways and ports, and testing the limits of its still-young shipping companies, say experts from the Boston Consulting Group and the Wharton School. The bottom line implication: As companies draw up operations plans for China, they need to place much greater emphasis on logistics than they might in a developed country.

TCL’s Dongsheng Li: “We Should Control and Own Our Brands”

More and more Chinese companies, having won their spurs in the domestic market, are starting to explore new horizons through globalization. In the process, they face strategic and operational challenges centered around one central question: How should they make the leap from being successful Chinese enterprises to becoming excellent global ones? TCL, the world’s largest manufacturer of color televisions, has been grappling with this issue. Following a joint venture with France-based Thomson (which owns the RCA brand), TCL is trying to leverage its manufacturing expertise in China while seeking growth in markets such as Europe and the U.S. Will TCL succeed? In a recent conversation, Dongsheng Li, TCL’s CEO, discussed these issues with Wharton’s Michael Useem, director of the school’s Center for Leadership and Change Management; Jonathan Spector, vice dean of the Aresty Institute for Executive Education at Wharton; Liang Neng, a professor of management and director of the Executive MBA program at China Europe International Business School (CEIBS); and Knowledge at Wharton. 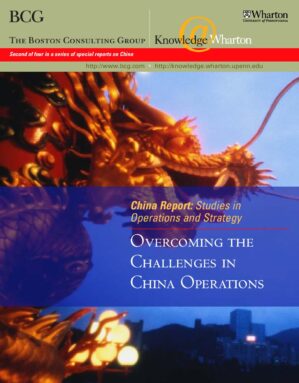