Emerging economies such as China, India and Indonesia have been on a roll for the past few years. Today, however, the pace of their growth is beginning to slacken, and trepidation is the dominant mood. This special report, prepared to coincide with Wharton’s Global Alumni Forum in Jakarta, features an analysis of the fast-growing Indonesian economy as well as trends in consumer spending and commodities trading. In addition, the report includes previously published Knowledge at Wharton articles on what a slowdown in China might mean for the world economy, the key issues facing China’s financial system, and the lessons Microsoft’s growth strategy in India holds for companies seeking new opportunities in emerging markets.

Indonesia’s Economy Is Surging Forward, but Challenges Abound
With GDP growth of more than 6% expected this year, Indonesia’s economy is stronger than it has been in years. The country is soon expected to join the club of nations with an annual GDP of more than $1 trillion, and foreign direct investment is at a record high. The stock market is booming and net foreign debt is less than 10% of GDP. Still, according to experts from Wharton and elsewhere, Indonesia faces several challenges. The country will need to continue economic reforms in order to sustain its performance.

Twin Engines: How Consumer Spending and Commodities Drive Indonesia’s Growth
In 2011, the Indonesian economy grew by 6.5%, and economists predict it will top 6% again this year. Domestic consumption accounts for almost two-thirds of Indonesia’s gross domestic product, while sales of lucrative commodities — such as coal, palm oil and gold — make up much of the remaining third. Rising prices for the natural resources that Indonesia has in abundance have helped push millions of people into the middle class, increasing their purchasing power and driving a boom in sales of everything from cars to cosmetics to air travel.

China’s Gravity-defying Economy: How Hard Will It Fall?
As China’s high-octane economy shifts into lower gear, virtually everyone agrees that the double-digit, super-charged boom years are drawing to a close. Speculation over the possibility of a so-called “hard landing” for the country flourishes with each boom and bust cycle, only to die down as China’s growth revs up again. This time, however, both external and internal factors are reinforcing the downturn, and experts warn that without some painful reforms, there will be worse trouble to come.

Ravi Venkatesan: Winning in India Can Help Companies Win Globally
Under Ravi Venkatesan’s leadership from 2004 to 2011, Microsoft India’s revenues grew fivefold and the country became one of the fastest growing markets for the software firm. Last year, the 49-year-old Venkatesan quit as chairman of Microsoft India to explore new ground. He is now working on a book about why it is imperative for multinationals to succeed in India. In an interview with India Knowledge at Wharton, Venkatesan suggests that the capabilities that companies develop in India can help them win all over the world.

China’s Antiquated Financial System: The Creaking Grows Louder
China’s 30-year economic miracle is now up against an antiquated financial system that threatens to hold it back. If the country is to fulfill its aspirations to move from a low-wage manufacturing and export-based economy to a higher-margin, knowledge-based economy, it will take a far more efficient financial system to support the innovation needed to advance. And that requires a new financial relationship with the rest of the world, based on trust and transparency. A big question is whether that is politically possible yet. 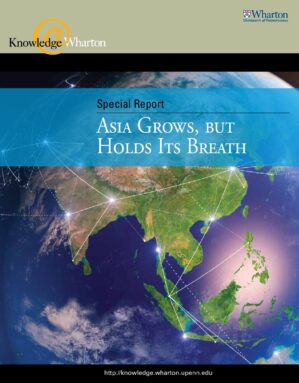