With 610 million people, the 10-member Association of Southeast Asian Nations, or ASEAN, is less than half the size of China’s market, but the region’s quickly growing — and relatively big spending — middle class has become increasingly attractive to multinationals and foreign investors. The ASEAN bloc — which includes Brunei, Cambodia, Indonesia, Laos, Malaysia, Myanmar, the Philippines, Singapore, Thailand and Vietnam — is nudging Chinese manufacturers aside as China’s labor force begins to shrink and wages rise. Moreover, the planned launch of the ASEAN Economic Community (AEC) at the end of 2015 is likely to help sustain rapid economic growth in the medium term, analysts say.

This special report looks at the forces shaping the ASEAN region in 2015, most notably the effect of falling oil prices, along with in-depth views of two countries — Thailand and Indonesia — which are both facing unique challenges on the road to becoming economic powerhouses. Also included is an interview with Kan Trakulhoon, president and CEO of SCG, one of Thailand’s largest conglomerates, on managing a workforce in a volatile economic environment.

Knowledge at Wharton thanks the Tanoto Foundation for its support in publishing this report.

ASEAN in 2015: Will Lower Oil Prices Interfere with Rapid Growth?

A new economic pact to take effect at the end of 2015 will sustain rapid growth in ASEAN in the medium term, analysts predict. However, oil remains a wild card for the region.

Thailand: Can the Whimpering Tiger Spring Ahead?

Political turmoil and a weakening economic outlook have cast doubt over Thailand’s growth prospects. What will it take for the country to become the region’s next South Korea?

Now that a new president, Joko Widodo, took office last year, all eyes are on how he will lead the largest economy in Southeast Asia into the future.

Thai conglomerate SCG has prospered because of its emphasis on human resources above all, CEO Kan Trakulhoon says.

ASEAN on the Rise 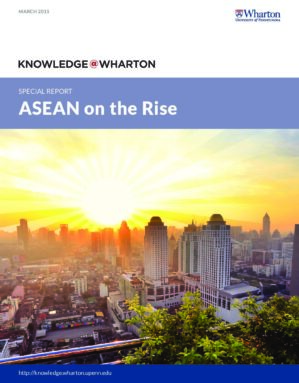