Wharton’s Mauro Guillen talks with Wharton Business Daily on SiriusXM about his new book on the trends that are shaping our future.

Big demographic, economic and technological changes are coming — from an aging population in the U.S. and the rise of sub-Saharan Africa as a compelling middle-class market to automation causing “technological unemployment,” according to Wharton management professor Mauro Guillen.

In his new book, “2030: How Today’s Biggest Trends Will Collide and Reshape the Future of Everything,” Guillen discusses how these changes will affect us in the years to come. During a recent interview on the Wharton Business Daily show on SiriusXM, Guillen noted that while these trends have been gathering pace for years, the pandemic is accelerating many of them. (Listen to the podcast above.) Rising inequality across income, race and gender will demand urgent attention, and government policy making will need to become more innovative to address such challenges. Individual responsibility will play a role, too, in areas such as climate change, he says.

Wharton Business Daily: Why did you write this book?

Mauro Guillen: Everyone sees change everywhere, and I think it’s important to figure out where are we going to be five to 10 years from now. How are consumer markets going to look? It’s extremely important for businesses and also for individuals – as investors, as savers and more generally as citizens – to figure out what the future’s going to look like.

Wharton Business Daily: What role has the pandemic played in that change?

Guillen: The pandemic essentially has two different effects, depending on the trend. One is to accelerate and to intensify some things. For example, consider population aging. Inevitably in a recession, we have fewer babies. The mere postponement of having babies accelerates population aging, so problems related to Social Security and pensions will arrive earlier. Other types of trends get delayed, or even reversed, by something like this. One of them will be the growth of cities, especially in Europe and in the U.S.

“We’re going to have to think very carefully in political terms and in social terms about the implications of further automation, especially in the service sector.”

Wharton Business Daily: North America, Europe and Asia have been vital in the last several decades, but you talk about other areas of the world picking up and having a larger impact in the years ahead.

Guillen: I am very bullish on sub-Saharan Africa because of their demographic dynamism, and because the biggest cities in Africa are growing and creating an expanding middle class. Now, only maybe 15% of the sub-Saharan African population is middle class. But that proportion is growing. That will change the world, because Africa will soon become the second most populous region in the world.

Wharton Business Daily: What significant changes do you see in terms of technology?

Guillen: As a result of the pandemic, technology adoption has been progressing much faster, out of necessity. We’ve been confined to the home, students cannot attend school and so on and so forth. But we also need to watch carefully the new incentives for automation, especially in the service sector, that this public health crisis creates.

We’re going to see more automation. We’re going to see, unfortunately, more technological unemployment. Many other jobs have been lost in the American economy. I don’t think they’re coming back. We’re going to have to think very carefully in political terms and in social terms about the implications of further automation, especially in the service sector.

Guillen: Yes. In terms of policy making, we have to figure out how to retrain people and how to help those people find other jobs. We may have to consider very seriously ideas such as a universal basic income, which you have discussed on your show on several occasions. This used to be a fringe idea, but it’s quickly becoming more mainstream.

Wharton Business Daily: We’ve seen a little bit of that here in the U.S. with the $1,200 stimulus checks that were part of a $2.2 trillion package of coronavirus relief measures. But what you’re talking about concerns how governments look out for their citizenry, correct?

Guillen: Exactly. It’s not just about being nice to people, which I think we should be. But universal basic income also has a business case. Remember, two-thirds of the American economy is [made up of household] consumption. If people don’t have jobs or don’t have well-paying jobs, then we need to compensate for that.

Wharton Business Daily: You also focus on how currencies may change. To a degree, we’ve already seen that with bitcoin.

Guillen: Yes, we need to seriously consider how entrepreneurs can come up with new ideas as to what cryptocurrencies, or to be more precise, crypto tokens, will be used for.

“I hope that the two presidential candidates start debating exactly how they’re going to deal with increasing inequality.”

If cryptocurrencies are just a substitute for the money that governments issue, then I don’t think we’re going to get too far because our regulators are always against cryptocurrencies as a competitor for legal tender.

But if we add other functions or other uses to those digital tokens — like if they will help us vote, keep politicians in check or provide incentives for people to save the environment — then there is a bright future ahead for digital tokens. So instead of digital currency, I would say digital tokens, which would include a currency component to them.

Inequality: The Next Frontier

Wharton Business Daily: How do we address the wealth gap?

Guillen: That’s a huge development of the last 20 years, and the pandemic only exacerbates inequality. Not everyone can work from the home, and therefore they have to expose themselves to the virus while taking public transportation to go to work. Consider students. It is estimated that up to 20% of K-12 students in the U.S. don’t have the hardware or the connectivity that they need at home in order to continue school work. This is the most unfortunate part of this pandemic, and it exacerbates inequality based on income and race.

That is true even by gender. Unemployment is growing faster among women than men. So, this is something that we need to pay attention to. I hope that the two presidential candidates start debating exactly how they’re going to deal with this increasing inequality.

Wharton Business Daily: Are we ready to tackle these issues?

Guillen: There is increasing awareness, but I guess we will have to wait until after the presidential election. But whoever happens to be in the White House and whoever controls the Senate come January, I don’t think they will be able to ignore the issue of inequality. We’re seeing social tensions and all sorts of frictions proliferate. The sooner we start tackling it, the better.

Wharton Business Daily: People are worried about various individual issues. But should the emphasis be on changing the overall mindset about how we want our world to look in 2030?

“We’re seeing social tensions and all sorts of frictions proliferate. The sooner we start tackling it, the better.”

Guillen: I do believe so. For example, many parents are now concerned about whether their children will be able to have the kind of life that they have been able to have. The way things are going, maybe only a small fraction of them will do better than their parents.

Here in the U.S., one of the single most important values that we have is that we want every generation to do better than the previous one. And this is becoming increasingly difficult. Millennials right now are suffering from — for a second time during their adult lifetimes — a very difficult labor market.

There’s more consciousness and awareness of this, and the culture will need to adjust in terms of revisiting some of our values.

Wharton Business Daily: How will the mindset of governments and policymakers need to change?

Guillen: The time has come to be a little bit more innovative, to explore things in terms of government policy making that 10, 20 years ago we thought were completely out of bounds. The problems have become so large. By the way, we haven’t even talked about climate change. We really need to start thinking outside of the box.

Wharton Business Daily: What should we be doing?

Guillen: We need to focus on two things. One is international collaboration among governments when it comes to climate change, but also in other areas like trade, where it is completely absent right now. The second one, which is the one that I push in my book, is we as individuals need to take ownership of this. We need to be less wasteful. We need to economize our resources. We need to be more pro-environment in our own behavior as consumers. 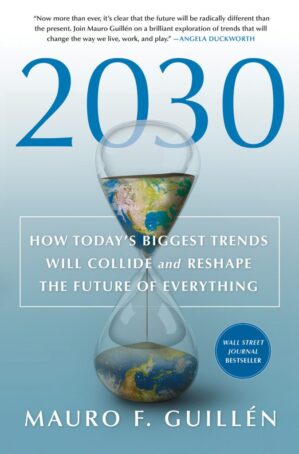 Get 2030: How Today's Biggest Trends Will Collide and Reshape the Future of Everything, by Mauro Guillen.