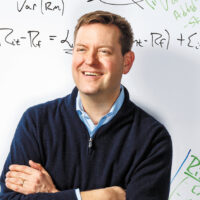 A few months ago, Goldman Sachs put out a report that pondered whether value investing was dead. The facts, at least on the surface, seemed to indicate that value investing was, if not dead, at least on life support. According to the investment bank, the Fama-French model of buying low-priced stocks booked a cumulative loss of 15% in the past decade. In the same period, the S&P 500 rose by two-thirds. Value investors are seeing the longest dry spell since the Great Depression, and future returns will likely be lower than the historical average, the report said.

The relative underperformance of value stocks compared to their growth stock counterparts has raised doubt among some other long-time value practitioners as well. In a letter sent last month to investors, hedge fund manager David Einhorn wrote that “the market remains very challenging for value strategies, as growth stocks have continued to outperform value stocks. The persistence of this dynamic leads to questions regarding whether value investing is a viable strategy.” He later clarified that this underperformance is only “temporary” and that value investing will rebound at some point “significantly.”

Wharton finance professor Richard Marston, who teaches a segment on value vs. growth stocks for Wharton Executive Education’s CIMA program for financial advisors, says value’s performance using the standard benchmarks for growth and value investing — the Russell 1000 Growth Index and Russell 1000 Value Index as opposed to the Fama-French model — does show it lagging behind growth. “Growth stocks have outperformed value stocks since the bottom of the financial crisis in February 2009 [using monthly data], but both have done extraordinarily well,” he notes. Growth booked a cumulative return of 337.9% through August 2017 while value brought in 278.3%. “A difference perhaps, but a value investor hasn’t done badly,” Marston says.

So is value investing really in trouble? It depends on how one measures value. In general, value investing looks to buy shares of companies trading lower than their intrinsic values. As such, value investors seek to buy financially solid companies at a discount, such as those with plenty of cash in the bank but are caught in a bad spell after decades of robust earnings. Benjamin Graham, widely considered to be the father of value investing, and David Dodd, who coauthored a seminal book on the topic with Graham, favored buying a stock if it is trading close to the company’s intrinsic value as captured by its tangible assets as well as earnings, dividends, financial strength and other factors.

“It comes down to how you think about value.” –Christopher Geczy

Goldman Sachs itself acknowledged that other value strategies yielded better results than the Fama-French model, which relies heavily on the price-to-book ratio. In its report, the investment bank said choosing stocks based on their enterprise value to EBITDA (earnings before interest, taxes, depreciation and amortization) instead of trailing price-to-book ratios would double the annualized return since 1980 — and with less volatility.

“It comes down to how you think about value,” says Christopher Geczy, academic director of the Wharton Wealth Management Initiative and the Jacobs Levy Equity Management Center for Quantitative Financial Research. “If you look at high level measures, growth has beaten value” driven especially by the ‘FAANG’ stocks — Facebook, Apple, Amazon, Netflix and Google (Alphabet). But that’s because the hot tech sector has an outsized effect on performance. “Once you control for sector, the [difference between growth and value’s return] is much, much lower.”

In addition, Geczy has looked at the persistence of value across asset classes, industries and countries. Referring to his work with Mikhail Samonov of Forefront Analytics, “Two Centuries of Value and Momentum,” Geczy says that “the ubiquity of the value effect in-sample and especially out-of-sample, across places, times and investments, before and after computers and broad data availability speaks strongly about its potential endurance as a premium.”

Marston points out that “the growth performance has been driven by a handful of very large tech firms.” As of last month, the five largest stocks in the Russell 1000 Growth Index were Apple, Microsoft, Amazon, Facebook and Alphabet. Technology companies comprised 38.7% of the index’s total market value. In contrast, the Russell 1000 Value Index’s exposure to tech is 8.6%. However, it is heavy in financial stocks — which went through a drubbing after the financial crisis — making up 26.6% of total market value. The top five holdings are Berkshire Hathaway, JPMorgan Chase, ExxonMobil, Johnson & Johnson and Bank of America. (Financials make up 3.4% of the Growth index.) 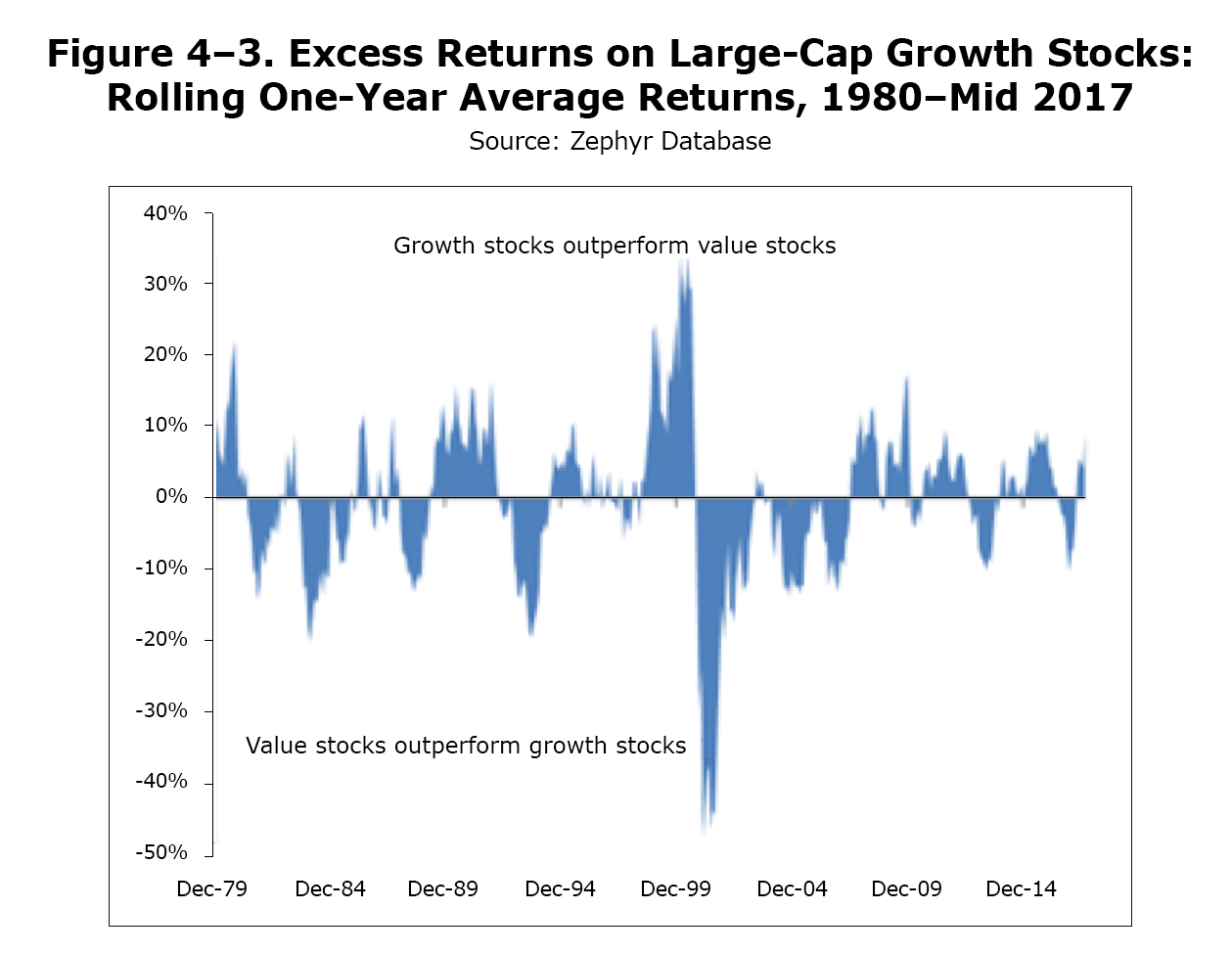 Marston says the outperformance of growth “is well within past experience.” He points to a chart showing 1-year moving average returns on the Russell 1000 growth and value indexes since 1979. “On this graph, recent outperformance of growth doesn’t look impressive at all.” Indeed, Marston says growth’s uptick is “nothing compared with what we saw in 1999 to 2000 [during the dot-com boom and bust] or at several other times over the period since 1979 when the Russell data begin.” However, what’s different this time is the small number of firms leading the gains. “Firms like Apple and Google are huge, relative to the largest firms we see in the value sector,” he adds. “We will see whether Graham and Dodd have the last laugh.” 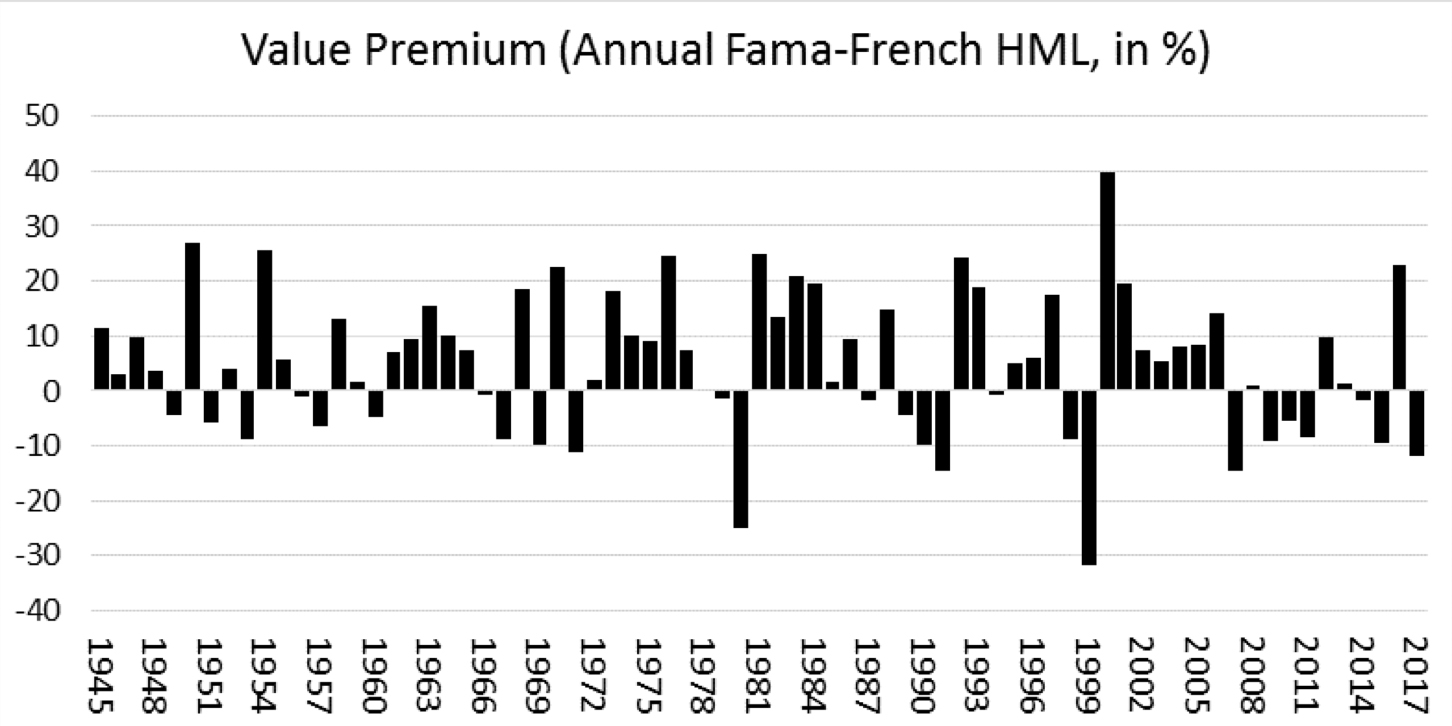 In an October 18 memo to clients, Jocelin Reed, an associate at AJO, a value-oriented money management firm, compared the returns of the Russell value and growth indexes and concluded that sector allocation drove the underperformance of value compared to growth. “In the most recent run, on an annualized basis, the growth index outperformed the value index by nearly 4%. Interestingly, nearly 64% of this return differential is a result of growth sectors outperforming value sectors.” Previously, sectors accounted for 10% of the difference in returns.

Reed said growth typically dominates when the information technology sector outperforms financials and consumer stocks do better than energy. “As such, the global financial crisis and oil shocks define this period far more than a breakdown in the fundamentals of value investing.” To prove her point, she looked at another metric of value: price to reported earnings. After excluding sector bias and transaction costs, Reed said the cumulative return of stocks chosen under this method was 26% over the last 10 years.

“The growth performance has been driven by a handful of very large tech firms.” –Richard Marston

Donald Keim, Wharton finance professor and director of the Rodney L. White Center for Financial Research, says there has been a lot of variability and cyclicality in the value premium — how much value has outperformed growth — over time, and there also have been several extended periods when the value premium has been “zero or even negative.” These are periods from 1949 to 1960, 1966 to 1972, 1985 to 1991 and 2007 to 2017. “It’s hard to predict when we will observe the turning point from positive to negative, or vice versa,” Keim adds. “Do I think the value premium … is dead? No. I’m pretty confident that at some point in the future, the value premium will again be positive.”

The slow growth that has plagued the U.S. economy since the Great Depression and low interest rates have made investors chase growth where they can find it. When will it swing back to value? Not soon, according to Goldman Sachs. It believes that value returns will “remain subdued in the near term.” Value tends to perform well early in the cycle of a strong economy, but the economy is in a mature stage. However, the investment bank is not saying value is dead. The lackluster performance is a cyclical phenomenon, not a secular or deeper-rooted change, the Goldman Sachs report notes. And as long as human beings — who can be emotional and irrational — invest, “value will continue to be a good long-term investment strategy.”