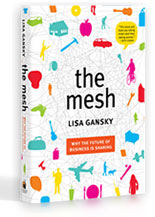 Winston Churchill once cynically remarked that the “inherent vice of capitalism is the unequal sharing of blessings,” while the “inherent virtue of socialism is the equal sharing of miseries.” Such cynicism might well become obsolete in the future if Lisa Gansky, former CEO of web-based businesses such as GNN and Ophoto is to be believed. Gansky has just published a book titled, The Mesh: Why the Future of Business is Sharing, whose central premise is that society has reached a stage where owning stuff is less important than sharing it.

To Gansky’s credit, she does not argue that sharing is a new trend in business. In fact, it is widespread: After all, passengers share an aircraft when they travel from one destination to another just as patrons of libraries share books which they borrow, read and return. What is new, according to Gansky, is that sharing platforms have now begun to invade areas that in the past were bastions of individual ownership and use.

Take private cars, for example. Gansky noted in a recent TED talk that individuals who own automobiles in the U.S. use them just 8% of any given day, on average; the rest of the time, the autos just sit around waiting to be used. This reality has driven the success of Zipcar, a sharing service that offers people access to vehicles in their neighborhood that are not being used. Netflix offers another instance of a company based on the premise of sharing DVDs. Gansky writes: “Businesses as big as Netflix and Zipcar…have figured out that there is gold in giving people convenient access to shared goods.”

As technology and social media create larger and faster information networks, the use of shared service platforms will see explosive growth, Gansky believes. “The game-changing expansion of web-enabled mobile networks has converged with the explosion of social ones,” she writes. “Each reinforces the other. Within a historical eye-blink, we have constructed a whole new language of sharing. You text, poke and tweet your friends to meet at the pub you chose on Yelp, and then share the evenings goofy photos on Facebook the hungover morning after. Awesome.”

It is this emerging eco-system of sharing platforms that Gansky labels “the mesh.” As more companies move into this space, one of the most imporant things they can share is information about their failures, she says. For example, a bike-sharing service in France saw notable successes but it also made a number of mistakes – and was transparent about publicizing what it had learned. This helped similar bike-sharing services that came up in Spain and Britain to avoid these errors. “No one has to repeat the version 1.0 screw-ups and expensive learning experiences,” she says.

Gansky has set up a web site – meshing.it – that includes a directory of companies that offer shared products or services. Initially the list had 1,200 companies but the size has now nearly tripled to more than 3,300 companies, Gansky notes. “We are still at the beginning,” she says.

If all this sounds intriguing, we invite you to read Gansky’s book. And once you have finished, don’t forget to share it.