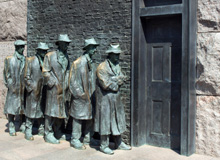 Fueled by this summer’s debt ceiling fight and a zero job growth report for August, worries about a double-dip recession are intensifying. Approval ratings for Obama and Congress have dropped, and both parties are trying to revive the economy and shore up political goodwill before the 2012 campaign begins in earnest.

Specifically, the plan calls for cutting the payroll tax for workers from 6.2% to 3.1% in 2012, up from a 2% reduction this year; doing the same for employers and eliminating the tax altogether for businesses that add workers or increase wages. If enacted, the proposal would also extend unemployment insurance, give tax credits to businesses that hire unemployed workers and allow states to use unemployment insurance funds for workers whose employers opt for job sharing over layoffs. Also the plan would allow workers continue to collect benefits while they “audition” for a job at no cost to the employer. In addition, there are provisions for infrastructure investments, such as modernizing schools, and funding for states to rehire teachers and emergency personnel.

Although Republicans applauded some aspects of the plan, they also criticized its size and rejected Obama’s statements that many of his proposals had the support of both parties. A number of analysts noted that it was extremely unlikely that many aspects of the plan would make it through Congress.

According to the Wall Street Journal, Mark Zandi, chief economist for Moody’s, estimated that the plan would add 2 percentage points to real GDP growth and create 1.9 million payroll jobs, reducing the unemployment rate by a percentage point.

Betsey Stevenson, former chief economist for the Department of Labor and a professor of business and public policy at Wharton, worked with Obama’s economic team on parts of the plan. She notes that the payroll tax cut for firms that add workers or increase wages plays on economic theory that “if you want to incentivize behavior at the margins, you need to put incentives at the margins.”

“We know there are a lot of firms out there sitting on a lot of cash that are hesitant to hire because they feel like there’s a lot of political uncertainty,” she says. “Firms are telling us that they have enough demand to justify hiring and they have the money to justify hiring, but are fearful of doing so. We’re giving them a little bit of a kick and a little bit of a nudge in the right direction because they’re really sitting on the fence.”

According to Wharton business and public policy professor Justin Wolfers, much of the decline in consumer confidence connects directly to the protracted debate over raising the debt ceiling. “This is the President giving Congress a chance at a do-over.”

He says the proposal is “deeply informed” by standard economic principles — “That’s a playbook that’s gone missing for far too long.” But, he adds, the road to a more robust recovery is still a long one. “Part of it’s going to be time. We really are in a big hole. We’re used to business cycles that can be solved in a year or two; that’s typically not the case when we’re in a hole this big.”

Culture and Marketplace Effects on Perceived Price Fairness: China and the USA