Investing in Gold: Does It Stack Up? - Knowledge@Wharton

Investing in Gold: Does It Stack Up? 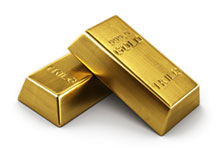 Gold has a timeless allure — especially if you worry about stock market volatility, inflation, a decay of ordinary currency or the collapse of civilization. Yet not everyone agrees that gold offers the safe haven its promoters describe. After soaring for a dozen years, it has plummeted in 2013.

After all, while gold has some practical uses in electronics and a few manufacturing processes, most of it ends up as jewelry on people’s wrists and necks — or rests quietly as stacks of ingots in rooms with thick doors and strong floors. How reliable can demand be for a commodity that very few people actually need? What is the proper role for gold in an investment portfolio? Why has its price been falling?

“I would never recommend a specific investment in gold,” adds Kent Smetters, professor of business economics and public policy at Wharton, who adds that investors have better ways to hedge against inflation — one of gold’s presumed benefits.

There is no denying that gold has held value for humans for thousands of years. It is found in the graves of the elite all over the world. The search for it drove much of the exploration of the New World. Treasure hunters risk their lives pursuing chests of it lost at the bottom of the sea.

The cause of these ups and downs is always open to debate. When the price of steel rises or falls, the reason can usually be found in the pace of world economic growth. Grain prices are heavily influenced by the weather. But gold rides waves of emotion.

Most gold becomes jewelry. In fact, among the largest consumers of gold are jewelry buyers in India, says Wharton finance professor Franklin Allen. “India has not been doing well, so that may be a factor” driving gold prices down, he notes. “There may also be some selling by central banks and hedge funds that we aren’t aware of.” Big sales, perhaps to raise money for economic stimulation, would increase gold supply, undercutting prices.

Gold prices are also affected by the ebb and flow of demand for other investments. If stocks look good, some investors will switch from gold to stocks, and falling demand will help drive gold prices down. Gold’s fall this year coincides with a fast climb in stock prices. “Gold and silver are suffering because people are moving money to the stock market,” Smetters says.

As an investment, gold has some flaws. Anyone who owns it in significant quantity would be wise to ante up for secure storage, which creates a cost that drags on the return, says Siegel. And, unlike bank savings, bonds or dividend-paying stocks, gold does not provide income. “It’s a very volatile asset with no yield,” according to Allen.

Nor does gold provide rights to share in corporate profits — a perk enjoyed by any stockholder. Investors who want safety can use government bonds, knowing the government can use its taxing power to make good on its commitments to bond owners. No one stands behind the price of gold.

In a period of hyperinflation, when currency becomes virtually worthless, or a time of great distrust in the economy or banking system, gold may indeed become a safe haven, Siegel notes. “There isn’t anything that’s clearly better if you’re concerned about those sorts of events.” But he adds that people who turn to gold tend to be “overly concerned” about catastrophe. Putting a large portion of one’s wealth into gold would therefore mean sitting on the sidelines waiting for an unlikely event while other assets, such as stocks, produced better long-term returns. “I think you would be paying a big price,” Siegel says.

Currently, inflation is very low, which eliminates that factor as an immediate reason to hold gold, Smetters points out. Investors who want a guaranteed hedge against any future inflation have better options in inflation-indexed U.S. savings bonds, he adds. I-bonds guarantee a modest return on top of the inflation rate, while also insuring against loss due to deflation, or falling prices.

According to Smetters, there is another option: Treasury inflation-protected securities, or TIPS. These U.S. government bonds provide annual interest earnings plus a rise in principal, or the face value of the bond, tied to the inflation rate. (TIPS are best held in retirement accounts like IRAs and 401(k)s to avoid annual tax on “phantom income” from the inflation adjustments, Smetters notes.) Allen agrees. “I would say TIPS are a better strategy [than gold] to protect against inflation, unless things are very bad indeed in the U.S. Swiss francs would also be a good bet.”

A well-diversified investment portfolio can also help guard against inflation, says Smetters. “I generally believe in a multi-part investment process that starts with a safe layer of bonds, internationally diversified.”

Another option, of course, is stocks, which, as Siegel’s data show, have a good long-term track record against inflation. A key reason: Companies can increase prices for goods and services as inflation drives up costs of raw materials and labor. Inflation can also lift customers’ incomes, enabling them to pay higher prices.

Real estate investment trusts, or REITS, also offer an inflation hedge, Allen adds. REITS are a form of mutual fund that own residential, commercial or industrial real estate. Property values and rents generally rise with inflation, making REITS a good hedge. For those worried about a collapse in the stock market, he suggests “put options,” which hedge against loss by giving their owners the right to sell at a guaranteed price a block of shares or a broad index like the S&P 500. To minimize costs — the premium paid for an option — the investor can buy “out of the money” puts. These are cheaper because they require the investor to accept some loss before the protection kicks in — similar to getting an insurance policy with a very large deductible.

Investors who worry deeply about other asset classes can put a small portion of their holdings into gold for peace of mind, so long as they are willing to pay a price in storage costs and weak returns, Siegel says.

Buy the Mine Instead

Most experts caution against investing in jewelry and collectable coins, because it’s hard to assess the artistic or collectable value that comes on top of the value of the raw gold. Professional investors trade gold on the futures market — but this is very complex, and futures are generally used for short-term bets rather than long-term investments.

As a compromise, investors can buy stocks in gold mining companies, says Allen. These stocks give shareholders the right to share in cash flows, and they tend to benefit when gold rises, though investors must also assess the quality of management, the firm’s competiveness in the market and any other factors typically involved in a stock purchase.

To avoid the cost of storing gold, investors can buy shares in exchange-traded funds (ETFs) that own physical gold kept in vaults in places like Switzerland. ETFs are a kind of mutual fund that trades like stocks, making buying and selling of gold very easy. They are a good way of speculating on spot prices, or holding gold for the longer term to diversify a portfolio. Gold ETFs might not be so good, however, as a hedge against financial, social or political chaos, because ETF trading depends on the financial markets, and the gold itself is inaccessible.

"Investing in Gold: Does It Stack Up?." Knowledge@Wharton. The Wharton School, University of Pennsylvania, 22 May, 2013. Web. 21 January, 2022 <https://knowledge.wharton.upenn.edu/article/investing-in-gold-does-it-stack-up/>

Investing in Gold: Does It Stack Up?. Knowledge@Wharton (2013, May 22). Retrieved from https://knowledge.wharton.upenn.edu/article/investing-in-gold-does-it-stack-up/

"Investing in Gold: Does It Stack Up?" Knowledge@Wharton, May 22, 2013,
accessed January 21, 2022. https://knowledge.wharton.upenn.edu/article/investing-in-gold-does-it-stack-up/