Housing Has Bounced Back, but Capitol Hill Holds the Key to a Sustained Recovery - Knowledge@Wharton

Housing Has Bounced Back, but Capitol Hill Holds the Key to a Sustained Recovery 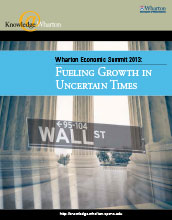 The U.S. residential real estate industry is showing signs of a recovery. Demand for homes is growing stronger, driven by historically low interest rates and government subsidies. Job growth would, of course, accelerate that rebound. However, for a sustained recovery, housing supply must increase with both new construction and regulatory reforms that could bring to market homes that are “under water,” or those whose market prices are lower than their outstanding loans. Those were the main highlights from a panel discussion on real estate industry trends at the Wharton Economic Summit 2013, held in March in New York City.

A crucial element of the legislative reforms is to find ways to shield the federal government from home financing losses, the panelists said. The government ended up becoming the country’s biggest home financier after the 2008 housing collapse, when it bailed out secondary mortgage finance agencies Fannie Mae and Freddie Mac at an estimated taxpayer cost of up to $360 billion. Bipartisan political consensus holds the key to the reforms, panelists stressed.

“The metrics certainly indicate a much stronger interest in residential housing than it seemed in the previous six years,” said Smith. His firm Realogy operates in all 50 U.S. states and 102 countries and has a 26% market share of the U.S. housing market in sales volume. The recovery has gathered pace since the first quarter of 2012 and is “completely unexpected,” he added.

Consequently, home prices have strengthened and the overhang of unsold homes is bottoming out, but something “much more dramatic” is occurring, according to Smith. “We literally have markets where we have no supply, no inventory,” he said, citing New York City as an example of this phenomenon. He saw that across the country — a week’s supply of homes in San Francisco, no inventory to sell in Miami and an outpouring of open houses “in every market” where Realogy operates. “We feel very strongly that this is a strong recovery and it is sustainable.” In Phoenix, home prices are up 25% and they have risen in the “very high double-digit percentages” in Southern California, added Blackstone’s Gray.

Smith said the housing recovery is occurring despite impediments. He cited two issues relating to the 2010 Dodd–Frank Wall Street Reform and Consumer Protection Act. One is a decision on what constitutes a “qualified residential mortgage,” or QRM, because that would set the criteria for the down payment for home loans that underwriters require. A related second issue is whether a decision about QRM could encourage developers to resume homebuilding.

Increased housing inventory is critical for a sustained recovery, Smith argued. A resolution to the QRM issue could release some of the 10.8 million homes that are under water, he explained. “If we do not have the increase in inventory, then we will still have a recovery, [but] that will be anemic.”

Since 2009, underwriters have been wary of risk and are lending only to “the highest possible standard” of borrower creditworthiness, Smith noted. He called for a speedy resolution of the matter and hoped the new debt-to-income criteria would be less onerous than people fear they might be. He clarified that he did not expect underwriting standards to become more lax. He only wanted to get back to the “pre-bubble” days, when underwriters required credit scores about 100 basis points lower than current expectations of about 750, he said. (Credit rating agencies award scores from 300 to 850.)

The supply-and-demand equation matters more than employment, interest rates or government policies, according to Blackstone’s Gray. In each of the last 30 to 40 years, the U.S. housing industry has added 600,000 dwelling units or 60% for every million people that joined the population, but that has fallen to 30% in the last four years, he said.

Homebuilders are staying away because existing homes are trading below their physical replacement cost, Gray noted. However, he was confident that over time, home prices would catch up with replacement costs, making a sustained recovery possible.

Blau of the Related Companies steered the discussion to focus on the broader economy. “It’s not the housing market that drives the economy; it’s the other way around,” he pointed out. Offering a developer’s perspective, he added that he would place bets on select urban markets, especially those with job growth such as those occurring in the technology and energy industries.

Gyourko said that with the U.S. government backing nine out of 10 home mortgages, the housing industry is not in equilibrium. “None of us thinks that the housing market should be run by the United States government on the debt side,” he added, triggering a debate on policy reform.

Millstein provided a historical perspective: The Great Depression of 1929 and the impaired real estate loans had damaged bank balance sheets, paving the way for Fannie Mae in 1938 and Freddie Mac in 1970 to provide banks and thrifts a secondary mortgage market.

“Fast forward, we have the same thing, effectively, in the last decade, where we had a huge bubble in real estate, a huge bubble in real estate financing,” Gray said. Indebtedness on residential housing stock more than doubled from $4.5 trillion at the turn of the century to $11 trillion by 2007. As the market collapsed, the government brought Fannie Mae and Freddie Mac under conservatorship. Effectively, 90% of every mortgage is with the two agencies or discounted by federal home loan banks.

However, over time, successive federal administrations have used Fannie Mae and Freddie Mac for unrelated purposes such as funding payroll tax cuts, Gray pointed out. Five bills now in Congress also seek to do the same, he added. “We are at risk as a country of turning them into cookie jars to pay for other things,” he warned.

Gray called for a “sensible transition from the government dominating [the housing mortgage] market to one that’s more balanced.” Part of that effort would be to protect the government against the risks of delinquencies if a downturn occurs, but with private capital taking the first hit. He suggested the creation of an agency like the Federal Deposit Insurance Corporation that protects bank depositors.

Not everybody should benefit from the reinsurance program, Gyourko said. He strongly felt the program should cover only deserving families and that it ought to be “means-tested” to filter out those with the means to avoid dipping into a government subsidy.

Not all investors are waiting for the reforms to play out. Gyourko noted that some private equity investors have discovered a new business model in the housing industry, of buying in bulk single family homes, fixing them up and renting them out — and possibly selling them in the long run. But billionaire investor Samuel Zell (founder of Equity Office Properties Trust, which Blackstone bought in 2007 for $39 billion) felt it was not a scalable business, he added.

Gray recalled Zell voicing that disapproval, but clarified that the key question was how to make it work. Blackstone focused exclusively on post-foreclosed homes. Next, it partnered with the largest, independent multifamily operator in the country to build a portfolio it called “invitation homes.” Today, it operates in 11 markets and has 1,000 employees. Tenants in such rental single-family homes stay longer than they do in apartment complexes, where the tenant churn could be 50% annually, he said. Gray, however, acknowledged that his business model “is still a work in progress … [and] there are lots of questions about operations,” notably controlling costs.

Another developing trend Smith noticed is that of “generational housing,” where immigrant families have several generations living under one roof. “The Hispanic segment as a group, as an example, represents about 62% of the growth of household creation,” he said. “So, to meet that need, builders are actually building larger properties that would accommodate Mom, Dad, aunts, uncles, etc.” Gray said his colleagues believe that in places like Southern California and Phoenix, “there are a lot of people who are living in the shadows, who, if they have a path to citizenship will be very happy to be able to go out and buy a home.” Opportunities abound outside of the U.S. housing industry, too, such as “the huge amount of distress” the global credit crisis created, he noted.

The View from Europe

In the U.S., troubled real estate loans outside of housing have been substantially contained, but not so with European commercial real estate, he noted. He offered the example of Dublin’s largest hotel trading recently for 20% of the price it fetched in 2007. Such opportunities exist all across Spain, Italy, Germany, the U.K. and France, he added.

In India and China, real estate developers have seen access to debt and equity capital contract by some 80%, opening windows for opportunistic investors. New office construction has fallen 75% in Beijing and 60% in Bangalore, Gray said. “You’ve got to like places like Europe and India that nobody likes,” he said. Blau is also active globally, and in the last decade, his company opened offices in Shanghai, Sao Paulo and Abu Dhabi. He found it “tough” doing business in China and started to sign deals in Brazil, but the United Arab Emirates offers some compelling “micro opportunistic” deals.

Gyourko asked how New York City compared with the new growth centers around the world. Blau’s response: The city continues to be a safe haven for investors, and it has diversified its tenant profile beyond predominantly financial services to include technology firms. His company recently broke ground on Hudson Yards, a mixed-use development project of 15 million square feet in the city.

In the end, the aspirations of Americans will overcome the market math, Smith noted. “Look, nothing’s changed,” he said. “Home ownership has dropped because it was forced; it wasn’t voluntary.” While a section of the U.S. population will prefer renting its homes, the vast majority of Americans — about 65% — want to own single family homes, he said. “American values are such that you need to be a homeowner, and that’s going to continue.”

"Housing Has Bounced Back, but Capitol Hill Holds the Key to a Sustained Recovery." Knowledge@Wharton. The Wharton School, University of Pennsylvania, 30 April, 2013. Web. 26 September, 2021 <https://knowledge.wharton.upenn.edu/article/housing-has-bounced-back-but-capitol-hill-holds-the-key-to-a-sustained-recovery/>

Housing Has Bounced Back, but Capitol Hill Holds the Key to a Sustained Recovery. Knowledge@Wharton (2013, April 30). Retrieved from https://knowledge.wharton.upenn.edu/article/housing-has-bounced-back-but-capitol-hill-holds-the-key-to-a-sustained-recovery/

"Housing Has Bounced Back, but Capitol Hill Holds the Key to a Sustained Recovery" Knowledge@Wharton, April 30, 2013,
accessed September 26, 2021. https://knowledge.wharton.upenn.edu/article/housing-has-bounced-back-but-capitol-hill-holds-the-key-to-a-sustained-recovery/