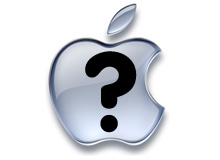 In other words, profits are down — the first time in a decade — and demand for its products, specifically its iPhones and iPads — was up. (Sales of Macs were slightly below last year’s numbers.)

CEO Tim Cook’s message on Apple’s website is that “our teams are hard at work on some amazing new hardware, software and services and we are very excited about the products in our pipeline.” Yet in a conference call with analysts, he declined to give specific dates for those new-product rollouts, noting only that they will be coming out in the fall and into 2014, according to a report in The Wall Street Journal.

Apple also announced a big increase in the company’s program to return capital to shareholders — $100 billion in cash by the end of 2015, and plans to increase its quarterly dividend by 15%. Meanwhile, its shares have plummeted approximately 40% from their peak last fall.

This set of mixed messages from Apple raises a number of questions about expected performance in the coming year.

Operations and information management professor Kartik Hosanagar says that Apple’s earnings “were more or less what I’d have expected. Strong sales with clear pressure on margins, lower growth and a strong dividend plan. I think these four — strong sales, slowing growth, lower margins, good dividends — are a blueprint of the future for Apple.”

In terms of sales, he says, “there is no doubt that Apple has a strong brand and that its iPhone and iPad lines will continue to sell well. At the same time, one has to acknowledge that the kind of growth Apple saw for the past decade is really hard to sustain for very long for any company. So, we should expect that growth will slow down unless Apple is able to come up with a completely new product line — which it has done consistently in the past,” but which is harder to do now.

As for margins, “Android smartphones are a genuine threat and will place pressure on Apple’s pricing,” Hosanagar notes. “Further, Apple will have to seek growth by partnering with all the carriers around the world that do not currently support iPhones on their network. Apple cannot expect the carriers to subsidize the phone for consumers as U.S carriers have done for Apple.” In addition, “price sensitivity is higher in these markets. And Samsung and HTC will be major competitors in these new markets. So Apple will face pricing pressure as it seeks to expand. I think lower margins are here to stay.”

According to Hosanagar, the question is, “if growth stalls and margins decrease, how does Apple deliver value to shareholders? That’s where the dividends come in, and I think they are here to stay.”

Overall, Hosanagar contends that Apple “has been getting the wrong kind of attention lately. The company has solid sales and is highly profitable. Wall Street should stop looking for growth and margins of 2010’s Apple in the Apple of 2013. The market has changed, as has the company. Apple is highly profitable, and dividends are a great way to return money to shareholders.”

Hosanagar says he would be “happy to see Apple continuing to innovate and producing good products at lower margins even if that means Apple can now be seen as a mature company. Also, I think Apple is currently underpriced by at least 10%-20% relative to other players in the market. The market has over-reacted to recent news.”

Management professor David Hsu suggests that the Apple news “reflects both successful competitor entry into smartphones and tablets as well as Apple’s own slower pace of innovation. Part of the issue is that consumers have been trained to wait for periodic but somewhat predictable product release times. Most of these have been incremental rather than revolutionary advances in its existing product portfolio. Cook is probably right to delay product introduction in new categories, such as smartwatches and TVs, until they are very good, but the competitive landscape in all of these areas is heating up.”

Cook could possibly consider “more unpredictable product introductions, ideally in categories which reinforce Apple’s strength in its established platform — and which enhance the value of its existing product lines,” he says.

Lawrence Hrebiniak, emeritus professor of management, sounds a slightly more cautionary note. “When a giant shows signs of weakness, there should be concern,” he says. “Consider the facts. The company’s year-over-year quarterly earnings declined, the first time in a decade. Profit margins are down significantly. Stock price has fallen. Customers are buying cheaper iPhones that still do a decent job. Competition is heating up, with companies like Samsung and its Galaxy S4 putting pressure on Apple. Higher dividends and stock buy-backs may calm things a bit, but the fact is that Apple indeed is under competitive pressure.”

The necessary strategic thrust for Apple, he suggests, “centers on one word: innovation. Cook has promised that new and exciting hardware and software are on the near horizon. These innovations had better be. Apple’s edge has always been innovation and revolutionary new ideas and products. Investors and customers still demand and expect this. If Apple regresses to the mean and hints at becoming another ‘okay’ company short on innovation, new ideas, and the resultant profits that have always followed, things will surely get worse for the company.”

Meanwhile, “if other companies like Samsung take on the new innovation mantel,” Hrebiniak adds, “Apple will face a tough uphill battle to regain its prior glory and position as leader of the pack. The problem with being a great company is that management must keep proving it. Hopefully, the proof is in the offing.”