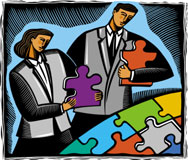 In the world of business innovation, it’s not always best to be first. Just ask trailblazing mobile communications giant Motorola, which in the 1980s and 1990s spent a whopping $7 billion to achieve the ambitious goal of a global, satellite-powered phone network — only to find the costly technology was outdated when it finally arrived.

According to Scott Snyder, a senior fellow at the Wharton School’s Mack Center for Technological Innovation, a Motorola engineer dreamed up the idea for the Iridium satellite project in 1985, when his wife was unable to make a cell phone call during a trip to the Bahamas.

After the engineer, Barry Bertiger, sold his bosses on the idea of a network of 77 low-orbit satellites offering subscribers virtually global coverage, it took more than ten years to make the ambitious idea a reality. During that period, the number of mobile phone subscribers and earth-based cell phone towers soared, while prices for digital phones plummeted. By the time the Iridium project came online in 1998, Snyder said, there was little demand for “a phone the size of a billy club” that cost $1,000, with conventional mobile coverage that was now almost ubiquitous. The $7 billion satellite network was sold for $35 million, which Snyder called “a lot of value destruction.”

“The lesson here is the set of assumptions we make a long term bet on … are very fragile,” Snyder noted at a recent conference, “Creating and Managing Innovation Portfolios: Improving the Allocation of Scarce Innovation Resources,” which was organized by the Mack Center.

Deciding when to gamble on a new and unproven technology — as Motorola did successfully with the very first cell phone in the early 1970s before failing spectacularly with its Iridium boondoggle — and when to adopt a more conservative research and development strategy that simply upgrades what is already in the marketplace is key to creating and managing a so-called “innovation portfolio.”

Companies that succeed in this area are not necessarily the ones who bring products to the market first. For example, Apple has a reputation for cutting-edge innovation, thanks to best-selling products such as the iPod music player and now the iPad tablet computer. But as Wharton entrepreneurship professor Karl Ulrich pointed out, “We think of the iPod as being the first digital music player, but actually it was about 50th.” Apple also waited years — studying the pros and cons of its rivals’ models — before introducing the hugely popular iPhone, which thrived by improving upon applications offered through existing mobile phone technology. Simply put, Ulrich argued, introducing a brand-new technology is “hugely overrated.”

For inventive companies, the difficult economy has cast a spotlight on the notion of innovation portfolios. Firms are re-evaluating not just how much to spend on research and development, but also how to strike a better balance between long-term, high-risk projects and more incremental efforts. In addition, businesses are trying to focus on initiatives that best leverage the company’s talents and niche in the marketplace, and developing new ways to track trends and come up with strategies for changing course if a particular effort isn’t panning out as expected.

In addition to a better understanding of the possible risks and rewards of research and development decisions, speakers stressed that sound management of a firm’s innovation portfolio also means simply developing an inventory of projects, eliminating duplicative efforts and understanding which ideas best match up with the firm’s core competencies, and which do not.

Ulrich divided innovation projects into three categories — short-term “Horizon 1” initiatives that might be a new application for an existing product; middle-term “Horizon 2” efforts that might feature an inventive new use for existing technology; and Horizon 3, which is inventing a radical new product or process that did not exist before.

According to Ulrich, with the exception of Motorola’s introduction of the earliest cell phone, companies that bring a brand-new idea to market generally do not become leaders in that sector, which is why he believes companies should be cautious about investing too heavily in the Horizon 3 projects.

Instead, Ulrich suggested that successful companies can today either copy groundbreaking inventions from their rivals, or buy up innovative small companies, and thus reduce risk. He noted that despite Apple’s reputation as an innovation leader, the firm actually spends less than the industry average on research and development.

To read more, visit: When to Gamble — and When to Fold? Innovation Strategies for a New Economy