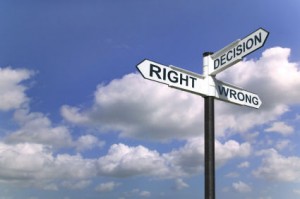 Anyone who has ever sat through a commencement address, read a self-help book or sought input from a friend when making a tough decision has probably heard this seemingly straightforward piece of advice: “Do what makes you happy.”

But the connection between doing what’s best for you and being content with that decision is more tenuous than most of us might think. According to Wharton marketing professor Deborah Small and PhD student Jonathan Berman, the conflict inherent in making a decision — and guilt about choosing oneself over the chance to help others — often makes looking out for your own self-interest seem downright miserable.

“Context is critical — people make very different choices based on the background. When the context is right, self-interest can feel quite pleasurable,” Small says, noting that people make numerous choices every day without thinking of them in moral terms. “But when self-interest is directly pitted against the needs of others, it makes self-interest feel selfish.”

Some people are psychologically hard-wired to think everything they do is selfish, Berman points out, while “others are oriented to think that nothing they do in their own self-interest is selfish.” Berman and Small decided to see what happened when the choice was taken out of people’s hands. In a recent paper, “Self-Interest without Selfishness: The Hedonic Benefit of Imposed Self-Interest,” which is forthcoming in the journal Psychological Science, they show that people who had a self-interested outcome imposed on them were able to enjoy it without the burden of feeling “selfish” — and were happier on average than those who got to make the choice on their own.

In the first of three experiments, 216 people were told that they were either going to be given $3 to spend on themselves, or would donate that money to UNICEF. Some participants got to choose between the two options; the others had no choice — they were forced forced to either keep the money or give it to charity.

Afterward, the entire group was asked to rate on a scale of one to seven how much enjoyment they got from the experience. The happiest group of people by a significant margin, the researchers found, were those who were simply told they could keep the money.

“The idea is to make it feel less and less like a choice,” Berman says. “The less something feels like a choice, the less tension people feel and the better they feel as a result.”

In the next experiment, 132 people were asked either to choose between accepting one of two gift cards, to pick one of two charities to give a $5 donation to or to decide whether to take a gift card or give the equivalent amount to charity. Once again, those who were only presented with gift cards(self-interested options) proved to be the happiest with the outcome.

Finally, Berman and Small conducted a third experiment designed to study whether people’s perceived level of control over a decision impacted their level of happiness with that choice. They recruited 252 people through Amazon Mechanical Turk and told the group that each would receive a monetary bonus in exchange for their work or would be asked to donate the same amount to UNICEF.

Participants were asked to give their preference between the two options and then told that either they would get to make the choice, or the computer would make it for them. (Unbeknownst to the group, however, the computer “picked” whatever option the participant said he or she wanted.) Once again, the group was asked how happy they were — and once again, those who got to keep the money were happier when they believed the decision was imposed on them.

According to Small and Berman, the research shows the danger inherent in giving people too many choices, and how giving moral undertones to a particular decision could put at risk the happiness that consumers associate with a particular store or product.

As an example, Berman points to programs in which supermarkets give customers a choice at checkout of whether to keep a refund for bringing their own reusable grocery bags, or to give that money to charity instead. “Companies tend to think about the people who would want that option, not about the people who don’t want to take it,” he notes. “Maybe if they just gave everyone the money as a refund, everyone would feel better off.”

“Or they could impose the choice to donate to charity,” Small adds. “Lots of companies do. For example, they say that for every dollar you spend, a portion of that is given to charity. Cause marketing is very effective if it is done well. Consumers like the idea of doing good. But the potential downside is that putting the customer in the position of deciding whether or not to do good might make him or her feel less satisfied.”

However, Berman notes, that feeling selfish isn’t necessarily a bad thing. “In some sense, the feeling of selfishness is a good thing for morality because people who don’t want to feel selfish end up doing good deeds,” Berman says. “Maybe there is a trade-off between your own happiness and doing good deeds, but it’s also doing good for the world.”