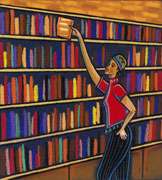 Simon & Schuster, Penguin Group USA and Hachette Book Group announced plans on Friday to launch a new book site this summer called Bookish.com. The site will offer consumers a smorgasbord of options, including the ability not only to buy books, but also to recommend books to friends, read book reviews and excerpts, download books to certain mobile devices and find information about individual authors, according to articles in The New York Times and The Wall Street Journal.

In the Journal article, Carolyn Reidy, CEO of Simon & Schuster, described the site as “a one-stop shop for consumers because today they feel they have to go all over the place to find what they want to know,” adding that other publishers are expected to join the venture.

David Shanks, CEO of Penguin, told the Times that the site will “embrace all the amazing marketing materials that publishers have been doing on their own sites and put them together on one site,” thereby helping to provide an answer to a consumer who wants to know, “Which book should I read next?”

Wharton faculty who follow the publishing industry have mixed reactions to the venture. Stephen Kobrin, publisher and executive director of Wharton Digital Press, says that while the disintermediation of retailers — cutting out the middlemen (wholesalers or retailers) and selling directly to consumers — “has gotten a lot of attention, the most interesting thing about Bookish.com is the attempt to create a community of readers online.”

As fewer and fewer readers shop in bricks-and-mortar bookstores, generating awareness of new titles becomes more and more of a problem, he adds. “In the past, readers often selected a book through browsing a section of a bookstore — current events, fiction, biography, etc. — and in-store merchandising played a large role in any publisher’s marketing program. With the segment of readers served by physical stores shrinking, online sites provide the potential for interested readers to find out about new books and authors that might be of interest, to look at reviews and even discuss what they like and do not like with others. Bookish.com may provide a way to drive readers to books in the absence of a physical pre-purchase experience.”

But Kobrin cites “one big caveat…. If the site is seen as just one more attempt by publishers to push their books — if it is seen as primarily advertising and sales driven — the odds of developing a real community of readers drops. If Bookish.com is going to be successful, it may have to allow reviews and discussions of competitors, other than the three founders, to be posted.”

Wharton marketing professor Peter Fader describes the venture as “an example of history repeating itself. You look at the music industry now, and it’s an abysmal failure, despite efforts to do similar things along these lines. People forget the history of services like Pressplay [and MusicNet] – music downloading services that supported the labels but didn’t serve up content quite the way people wanted it. These services said, ‘We are going to embrace the digital age but we’re going to do it on our terms.'”

He acknowledges that Bookish.com is a somewhat different proposition. The music services “were more about downloading” as opposed to Bookish.com’s goal of creating a community. However, “people won’t have a really big compelling reason for going there unless there is more commercial activity or at least the ability to get content.” Fader sees the publishers as “taking their old ways of doing things and transporting them into the digital space as opposed to coming up with a stunning new model. It is basically the same people running it. There is no reason to believe they will shake things up.”

Publishers, Fader adds, are “very good at defining who the next hot author will be, and they are good at editing, but they are not good at selling and never have been. For most of their existence, they disdained it…. The only way publishers will learn is by letting outsiders in.” Unlike the music world, which had Napster, the publishing world has “no single place where everyone wants to come together and where the industry can [offer] its stamp of approval. Just having the publishers hang out a shingle isn’t going to create demand.” The good news, he adds, is that there are no such “places” now in existence, so the industry is not in competition with anyone in that space.

Fader also points to the difficulties that Amazon has had “trying to create its own imprints or pushing new content through the Kindle. It hasn’t worked.” Conceptually, on paper, he adds, Bookish.com could be successful. “But it won’t be, because publishers won’t be able to really truly embrace and leverage the technology,” relying instead on “an online equivalent of traditional tactics.” In addition, the initiative will require “a massive top-down marketing push. There is no existing groundswell of interest. It would be better if the publishers had a competition and told entrepreneurs to build an online one-stop shopping book world, because right now [the publishers] are not capable of creating the right kind of buzz themselves.”

Wharton management professor Daniel Raff considers Bookish.com “a step in the publishers’ attempt to reach out to a clientele which looks for books online, or might look for books online…. I have the impression that the major publishers already invested in these capabilities haven’t yet seen very satisfying returns from them.” He also characterizes the new site as “an attempt to mimic various attractive features of the main Amazon book site but without the central attraction of that site — its scope. In itself, this seems likely to leave the publishers better off than they were, but not that much better.”

The interesting detail, he says, concerns “the file formats. If I read correctly, the publishers are not committing to that yet. I think that the big question in these matters now is, ‘Who can download?’ We have seen distributors and device manufacturers trying to become monopoly suppliers to some large group of potential customers, using the size of the locked-in group to sign up more titles but also using the locked-in relationship to throw their weight around — such as by imposing pricing schemes on the publishers, who in this perspective feature as manufacturers. That is, in a sense, backward integration without bothering to buy up the upstream firms. This is the upstream firms gesturing at fighting back.”