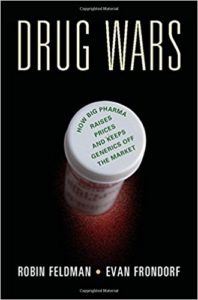 Former businessman Martin Shkreli made global headlines when he bought the rights to an HIV/AIDS treatment drug, then raised the price by 5,000%. The 2015 case drew attention to the serious problem of drug pricing in America, where the production of prescription medicine is a multibillion-dollar business. In the world of big pharma, the competition is cutthroat and the politics are deadly. Robin Feldman, director of the Institute for Innovation Law at the University of California Hastings, and Evan Frondorf, a former research fellow at the school, make a case in their book for how pharmaceutical companies conspire to keep prices high. Feldman discussed their book Drug Wars: How Big Pharma Raises Prices and Keeps Generics Off the Market on the Knowledge at Wharton show, which airs on SiriusXM channel 111. Following are key points from the conversation.

Life is good in the pharmaceutical industry these days, Feldman said. That’s because companies are profiting largely by raising prices to dizzying heights. Drugs that cost less than $400 a year in some countries cost $300,000 a year in the United States.

“Eighty percent of the growth of profits in the 20 largest drug companies has resulted from price increases — not new drugs. Just raising prices,” she said. “The brunt of that pain is felt by U.S. citizens because the drugs that we buy here are much more expensive than the prices elsewhere.”

Feldman offered drug company AbbVie as an example. In 2015, the company projected a $17 billion revenue increase by 2020. Only a quarter of that increase was estimated to come from new products or increased sales. Most of the money would come from raising prices.

“Those are staggering numbers,” she said. “The pharmaceutical industry would like to point to [Shkreli] and say, ‘This is just a few bad apples.’ But I have research showing that it’s not a few pharma bad apples. It’s business as usual, throughout the industry.”

Drug companies make significant profits as long as their patents hold, preventing generics from entering the market. But they have found a clever way to extend patent expiration by “tweaking” the medications. Feldman cited a 10-year study of prescriptions sold in the U.S. that showed how companies extend the “protection cliff” by adding exclusivities, additional patents and other minor changes.

“Rather than creating new medicines, pharmaceutical companies are recycling and repurposing old ones,” she said. “Every year, at least 74% of the drugs associated with new patents were not new drugs coming on the market, but they were existing drugs. In other words, we are lavishing these rewards not on exciting new innovations but on tweaks to things that already exist.” She added that extending the protection cliff is particularly pronounced among blockbuster drugs. “Of the roughly 100 best-selling drugs, almost 80% extended their protection cliff at least once, and half extended the protection cliff more. We have lots of examples of what I like to call serial offenders.”

Feldman also noted that there are more than 10 exclusivity rights that can be obtained through the Food and Drug Administration. Those rights have nothing to do with patents, such as conducting new tests for a drug. Each of the 10 rights can extend a company’s exclusivity period in the market by up to seven years. “The patent system is designed so that after a period of time, competitors can enter and bring the price down. That’s not happening,” she said.

The industry’s complexity is part of what makes it so hard to regulate. “The games are extraordinarily difficult, and they don’t lend themselves to nice sound bites,” Feldman said. “It makes it difficult for legislators, regulators and the public to understand what’s going on. I do think that we are at a point in history in which the American public is asking for change, and that’s critical.”

Patents last 20 years from the time a patent application is filed, so companies are keen to stake out territory as quickly as possible. Patents are often filed very early in the development stage of a new drug, and many of the ideas are never fully realized. “I’ve seen studies suggesting that when a drug gets to market, the drug company has an average of 12 years of exclusivity protection,” Feldman said. “The drug company would like to say, ‘we don’t have our full 20 years.’ That’s certainly true. But 12 years is nothing to sniff at for the types of monopoly pricing that we see.”

“Eighty percent of the growth of profits in the 20 largest drug companies has resulted from price increases — not new drugs.”

The Hatch-Waxman Act, enacted in 1984, was designed to allow rapid entry of generic drugs into the market as soon as patents ended. For a long time, the law was successful at bringing competitors into the fold, which brought down prices by up to 80%. The law also allows a drug company to challenge a patent. If the challenger wins, they are rewarded by being the only generic on the market for six months.

“That’s intended to help clear out weak and inappropriate patents,” Feldman said. “Unfortunately, the drug companies have taken this system and twisted it around.” She said patent holders are settling with challengers in what is known as “pay for delay” agreements. In other words, they pay that first generic to stay off the market.

Feldman thinks “pay to delay” is a form of collusion. She said the Supreme Court has opened the door to antitrust lawsuits to challenge this behavior, and some lower courts have found the behavior to be inappropriate. But antitrust lawsuits are expensive, time-consuming and difficult to pursue. And big pharma can be “extraordinarily creative” in their efforts to protect their valuable monopolies.

“These companies have developed extraordinarily complex deals that are difficult to tease out,” Feldman said. “Rather than have a direct payment to the generic company, the brand name drug may have all types of side deals that are entirely economically irrational. For example, they may pay a generic an overvalued amount to do something that the generic has no experience in and that one would never hire them to do, like being a dead middleman between the manufacturer and the seller. Or paying a generic company to market a drug, when the generic company has no marketing experience and isn’t a marketing company. These are economically irrational deals, but they camouflage what is essentially ‘pay for delay.'”

“Rather than have a direct payment to the generic company, the brand name drug may have all types of side deals that are entirely economically irrational.”

As a result of these tactics, generic companies are shrinking, consolidating and generally not gaining entry to the market.

Feldman is encouraging citizens to turn up the heat on the issue of exorbitant drug pricing. “Sometimes you have to run in a circle until you can find the exit,” she said. “I do believe we are at a point in history where it may be possible to find a way out of the problems that we have. The key, however, is going to be popular sentiment. We are a democracy. Even with extraordinary lobbying, Congress and state and local governments do respond if the pressure is overwhelming.”

Feldman believes the best way to fix the broken system is to simplify it. “Complexity breeds opportunity. And the drug industry is adept at exploiting that complexity. A simpler system makes it much more difficult to play games.” She advocates legal changes that would remove incentives and limit companies to one period of exclusivity on a chemical formulation with no allowance for extensions. She also calls for greater transparency in the process.

“Deals like this thrive in dark corners, and a little sunshine goes a long way,” she said. “If Congress or the states were able to promulgate regulations that would ask for simple openness about what the different deals are, it would be much easier to shut them down.”