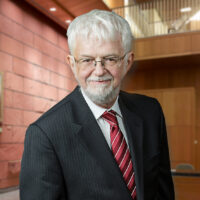 Far-right social media network Parler is unlikely to win its antitrust lawsuit against Amazon because it will be difficult to prove that the tech giant booted the platform off its server for competitive reasons, according to Wharton professor Herbert Hovenkamp.

Parler, which was founded in 2018 and boasts more than 4 million users, was effectively shut down on January 10 after Amazon removed the network from its web-hosting service. Apple and Google also dropped Parler from its app stores, the two largest on the internet. The moves came after public outcry that the conservative network was instrumental in helping users foment a January 6 attack on the U.S. Capitol.

Parler’s complaint, filed on January 11 in federal court, alleges antitrust violation, breach of contract and interference with the company’s business relationships with users. It wants a temporary restraining order against Amazon to reinstate the service.

“I don’t think that the antitrust complaint is going to fly for a couple of reasons,” Hovenkamp said during an interview on the Wharton Business Daily radio show on SiriusXM. (Listen to the podcast at the top of this page.)

Hovenkamp, an antitrust expert who holds a joint appointment as a University of Pennsylvania law professor and Wharton professor of legal studies and business ethics, said the complaint is based on the notion that Amazon and Twitter conspired to eliminate Parler as competition for Twitter, which is also hosted on Amazon Web Services.

“I don’t think that the antitrust complaint is going to fly for a couple of reasons.” –Herbert Hovenkamp

“The problem is the complaint simply doesn’t allege facts that tend to show that, and the federal courts require that these complaints be fairly specific,” he said. “You can’t just kind of make an atmospheric claim that there is a conspiracy. You really have to put some facts into it, and there really aren’t any facts here that would support that kind of conspiracy claim.”

Hovenkamp added that antitrust laws typically do not cover “political terminations.” Parler would have to prove that Amazon’s decision to eliminate political speech was motivated by profit, yet Amazon said it repeatedly warned the network about its failure to identify and remove threatening content.

In its response filed on January 12, Amazon said the case is without merit and asked the court to dismiss it.

“This case is not about suppressing speech or stifling viewpoints. It is not about a conspiracy to restrain trade,” Amazon said in the court document. “Instead, this case is about Parler’s demonstrated unwillingness and inability to remove … content that threatens the public safety, such as by inciting and planning the rape, torture, and assassination of named public officials and private citizens.”

“If Amazon is acting under the Communications Decency Act to shut down Parler, then the conduct is probably not breachable under the antitrust law in any event,” he noted.

“There’s a question about whether hosting services use this power in a reasonable way. Are they actually using it in order to shut down improper speech?”  –Herbert Hovenkamp

A Reckoning for Social Media?

Longstanding questions about government regulation of social media and tech companies are taking center stage with Parler’s removal from Amazon Web Services and the decision by Facebook, Twitter, YouTube and other social media platforms to suspend President Donald Trump’s account. This could be a year of reckoning for these companies, Hovenkamp said, but the conversations about content are separate from the legal issues surrounding antitrust.

“There’s a question about whether hosting services use this power in a reasonable way. Are they actually using it in order to shut down improper speech? I don’t think there’s too much question that threats to hang the vice president are improper,” he said. “But are they also using it in a way simply to dismiss conservative voices? All of them, including Amazon, vigorously deny that they’re going after conservative voices as such.”

Any congressional investigation into the actions of Amazon or Twitter will probably just reveal what is already known: The companies took action after Parler’s users exhorted citizens to violence. “Hang Mike Pence” was trending on Twitter late last week; the phrase had been tweeted more than 14,000 times before the company put a stop to it.

“The most you can get out of this investigation is that Amazon shut down threats to hang the vice president or kill [House Speaker] Nancy Pelosi or to take over government buildings by force or violence,” Hovenkamp said. “If that’s the most that they’re going to be able to get, then that’s not going to go very far.”