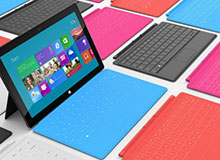 When Microsoft CEO Steve Ballmer officially launched Windows 8 on October 25, he touted a “re-imagined Windows” with touch-screen capability, a new user interface and the elimination of the traditional Start menu. However, analysts are questioning whether Microsoft’s new operating system — along with more than 140 different Windows 8-powered hardware designs from partners such as Acer, Dell, HP and Samsung — will catch on with consumers.

For one thing, PC sales are declining globally, and the trend doesn’t show signs of reversing. According to research firm IDC, PC shipments fell 8.6% in the third quarter of this year. By contrast, IDC’s tablet forecast was adjusted upward to 122.3 million units in 2012, from 117.1 million, courtesy of Apple’s iPad mini tablet. Analysts note that the Windows 8 launch hasn’t boosted PC sales, and that Microsoft’s newest flagship device — the Surface tablet/laptop hybrid powered by Windows 8 — hasn’t taken off, either.

“So far, it appears Windows 8 has not been the major catalyst many expected: We are reducing our Windows revenue estimates to reflect the lack of a meaningful reaction in the PC market from the launch and a weak ramp in Surface unit volume,” wrote Barclays analyst Ben Reitzes in a research note. “Data points from the PC supply chain remain negative, with no reversal in sight. The traditional Windows business will continue to be cannibalized by tablets.”

The strength of Windows 8, according to Wharton faculty and other experts, is its ability to span multiple devices — from PCs to tablets and mobile phones. The company could not risk being solely tied to PC sales when that market’s growth is slowing. With Windows 8, “[Microsoft] is attempting to leverage touch-screen technology and bring it to the traditional PC market,” says Andrea Matwyshyn, legal studies and business ethics professor at Wharton. She adds that Microsoft is on the right track with the idea that it can bridge multiple devices with one operating system, but it’s unclear what device will make Windows 8 a must-have.

“Credit Microsoft for trying to bridge the gap between tablets, desktops and mobile,” says Wharton marketing professor Peter Fader. But significant changes in the user interface — required to make Windows 8 compatible on multiple devices — could prove to be a hurdle to adoption by users who are accustomed to the old Windows operating environment, some analysts warn. “Customers are still wait-and-see,” Fader adds.

“Windows 8 is a big deal [for the company], and Microsoft made more than incremental changes to its flagship product,” notes Knowledge@Wharton technology and media editor Kendall Whitehouse. “It’s nice to see Microsoft being more aggressive and taking a big leap.” Still, Windows 8 will be a significant test for the firm, Whitehouse adds. “Microsoft is very good at focusing on profitability, but its track record for developing breakthrough products hasn’t been very consistent.”

Microsoft has reported that it sold 40 million Windows 8 licenses from October 26 to November 27. Speaking at an investment conference on November 27, Tami Reller, chief financial and marketing officer of Microsoft’s Windows division, said that the pace of Windows 8 sales is on par with that of Windows 7 when it launched in 2009. “Each release of Windows has its own characteristics,” said Reller. “The 40 million is roughly in line with Windows 7. If you think about the timing of Windows 7, there was a lot of anticipation, and it was also the type of a transition that didn’t really require much hardware change. It didn’t require the level of change that Windows 8 has required.”

The amount of change needed to make Windows 8 both tablet- and PC-compatible is a primary reason that analysts are mixed on Windows 8’s prospects. Those concerns were magnified when Microsoft replaced Stephen Sinofsky, head of the Windows 8 effort, with Julie Larson-Green as president of the company’s Windows and Windows Live division on November 12. Ballmer said the move was made to “drive alignment across all Microsoft teams” and products.

According to Fader, it’s too early to tell whether the company’s radically revised operating system will do well. And it’s certainly too early to call it a failure, he adds, since Windows 8 may see a long adoption curve as consumers navigate multiple hardware designs and new device interfaces. “So many people are locked into Windows and like it,” Fader notes. “They will adapt. But even if Windows 8 fails, it won’t be the first time Microsoft launched a bad OS.” Microsoft’s Vista and Windows ME operating systems both disappointed due to performance issues and weak sales, but the company rebounded with strong products in their subsequent operating systems.

Matwyshyn isn’t so sure. She says that Microsoft’s competition is decidedly different this time. By changing Windows 8 so dramatically with features like “Live Tiles,” which bring content to the user from multiple sources, and offering new hardware designs from Microsoft and its PC partners, the company “has caused user angst” through disorientation. “When you disrupt user comfort, you create unnecessary tension,” says Matwyshyn.

In an interview with MIT Technology Review, Larsen-Green said that internal data are showing that consumers become accustomed to Windows 8 after an initial adjustment period. “There’s a cutover point, around six weeks in, where you start using the new [features] more than the [ones] you’re familiar with,” she said. To facilitate the transition, Microsoft has included an option to use some features from the older Windows 7 desktop on Windows 8.

Whitehouse likens the revised Windows 8 interface to that of Microsoft Office 2007, which introduced Microsoft’s “Fluent user interface.” The new Office interface, with its “ribbon” feature that shows a changing display of menu items at the top of the application, initially caused a great deal of consternation among users. Once Microsoft tweaked a few details, however, the new interface settled in as the standard across the Office product suite. Should Windows 8 stumble, Microsoft is likely to retool and respond to customers with updates to the core operating system. “Microsoft has a lot of room to dodge and weave,” says Whitehouse.

Experts at Wharton say that the fate of Windows 8 may rest on whether Microsoft can successfully build its own hardware to showcase its new operating system. And so far, Microsoft has made a few missteps.

Along with the launch of Windows 8, Microsoft introduced its Surface device — a tablet with a keyboard that snaps onto the screen. The Surface uses the Windows RT operating system, a version of Windows 8 that runs on a more power-efficient processor and provides longer battery life. Microsoft’s starting price for the 32GB Surface is $499 without the keyboard. The catch is that while the Windows RT Surface runs a version of Microsoft’s Office products, it isn’t compatible with the full range of existing Windows programs.

Microsoft said that in January it will launch a 64GB Surface with Windows 8 Pro starting at $899 without a keyboard. The Surface Pro will get roughly half the battery life of the Windows RT Surface but be compatible with previous Windows programs and include a stylus for notes. Both Surface versions have keyboards starting at $119.

According to Fader, the Surface has a few hurdles to overcome to be a hot seller. The biggest issue is that Microsoft chose to sell the Windows RT Surface only in its own stores, which are few relative to the number of outlets Apple has. On December 11, Microsoft announced that the Surface will be available at retailers such as Best Buy and Staples. “Microsoft made a grave mistake on distribution,” notes Fader. “I love the first concept [the Surface with Windows RT], but it’s in the hands of very few.”

Matwyshyn predicts that the Surface with Windows RT could have a tough time threading the niche between a laptop and a tablet. “The Surface is an improvement in work integration and usability. But Windows RT is a mistake. The Windows RT [operating system] feels crippled in comparison to Windows 8” due to the incompatibility with previous Windows programs. “If Microsoft views the future of Windows 8 as being tied to the mass appeal of the Surface, that may prove to be overly optimistic,” she adds. “If Windows 8 and Surface don’t do well, [there will need to be] a tough internal discussion within the company on Microsoft’s positioning and core competencies.”

According to Whitehouse, the Surface could be interesting for corporate customers, but he says that “the jury is still out” until a key question is answered: “What’s the niche that the Surface can fill that will give Microsoft a unique advantage [in the enterprise]?”

Technology industry insiders also wonder how the Surface and other Windows 8 devices, which are largely new designs, will fare. Intel CEO Paul Otellini said on the company’s third quarter earnings conference call that many devices are trying to be the best of both worlds by combining laptops and tablets. However, “we honestly won’t know for 12 months” what device ultimately moves the most Windows 8 volume, he noted. Not surprisingly, Apple CEO Tim Cook views the Surface as a product that tries to do too much. “I suppose you could design a car that flies and floats, but I don’t think it would do [both] of those things very well,” he said during Apple’s earnings conference call on October 25.

Some analysts say that Microsoft may be trying to juggle too much at once. Currently, it has enterprise juggernauts like Windows Server, Dynamics CRM and Office. On the consumer front, it has Windows Phone, Xbox and Bing, the No. 2 search engine behind Google.

Yet Wharton management professor David Hsu argues that Microsoft is doing the right thing by having several experiments and businesses going at once. “The general idea is that you want to spread your bets and hit as many tipping points as possible. Microsoft is forced to even out its bets in multiple directions.” The company’s enterprise business is a traditional strength, says Hsu. The Surface is an experiment in tweaking Microsoft’s partnership with hardware vendors and represents the software company’s move to integrate its own software with hardware, he notes.

If Microsoft refrains from going after the tablet and smartphone markets, it risks watching Apple and Google take its computing crown, Hsu says. A rule of thumb, he adds, is for companies to pursue related markets as long as there is some benefit even if the efforts don’t succeed. “If Microsoft strikes out on tablets and smartphones, there should be some value in learning” from those initiatives that can be applied to the development of future products. “There will be convergence over time.”

In addition to mobile devices, another potential area of growth for Microsoft is “cloud computing,” which offloads local processing to Internet services. Microsoft has various efforts on the cloud front — including Azure for businesses and Office 365. “The organization is pushing toward the cloud,” says Matwyshyn. “Moving in multiple directions is a good thing to see.”

The larger question is whether Microsoft can help its newest efforts gain a foothold in the market. After all, the company was pushing tablet computers in 2000. “They have brilliant ideas in the organization, but the ideas get lost internally,” Matwyshyn notes. “Microsoft can be first to market with a great idea and not understand the consumer.” For instance, Microsoft’s initial tablets were bulky laptop hybrids and required a stylus.

One side effect of Microsoft’s penchant for chasing multiple markets is incoherent marketing, says Fader. “Microsoft’s problem is that it has a mishmash of products. It has divisions with different business models, and the umbrella branding is off — it has all of these [products], and the consumer doesn’t know where [they fit in].” One possible way of reorganizing would be for the company to split its enterprise and consumer businesses, Fader suggests, but it’s too early for that decision. Overall, Microsoft needs a more coherent tale to explain its businesses and a brand that can span multiple products. “Apple has an umbrella brand…. Google has a good umbrella brand. But Microsoft represents an operating system company stepping out of its comfort zone.”