Why the U. S. Housing Market Is Poised to Enter a ‘Virtuous Cycle’ 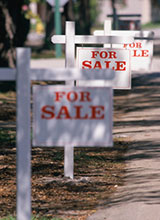 By the less-demanding standards of the past few years, the latest housing figures, like many from recent months, look pretty good.

On September 25, the Standard & Poor's Case-Shiller Home Price Index showed a 1.2% price gain in July compared to a year earlier. Prices have risen for three consecutive months. The National Association of Realtors (NAR) reported on September 26 that sales of existing homes had risen by 9.3% in August, compared to a year earlier, and that the median price of existing homes sold was up 9.5% over the past year. (NAR and Case-Shiller use different methodologies.)

For the 12 months ended in July, sales of newly constructed homes were up about 25%, though the total was still only about half of the 700,000 units considered healthy. Experts are especially impressed that prices of the least-expensive third of homes lead the gains, going up a full 1% between June and July. Those homes had received the worst drubbing in the recent housing market collapse.

Is this the start of the long-awaited and elusive housing recovery — one that would bring a stronger economy overall? Or is the market just taunting us as it bumps along the bottom, perhaps only to plunge again?

"It's for real. This is absolutely for real," says Susan Wachter, professor of real estate at Wharton. The market, she says, is poised to enter a "virtuous cycle" where positive trends will spur more positive trends. "This market recovery will continue," she says, predicting that rising prices will prod potential buyers to buy before prices go up more. That demand will nudge prices up, drawing in even more buyers.

"I have been optimistic about this market for six months or a year," she adds, noting that the latest data supports an analysis of the market she offered in a recent paper co-authored with Mark Zandi, chief economist and co-founder of Moody's Economy.com, and Moody's analysts Celia Chen and Cris DeRitis. The paper, "Assessing the Housing Threat and the Appropriate Response," was prepared for a recent Pew Charitable Trusts conference titled, "Strategies for Revitalizing the Housing Sector."

A Sense That Things Are Getting Better

Though the average home is still worth 30% less than at the peak of the bubble in 2006, from January through July, prices rose 5.9%, the strongest performance in seven years.

Several factors have combined to strengthen the market, Wachter says. Extraordinarily low mortgage rates — about 3.5% for the standard 30-year, fixed-rate loan — have allowed millions of homeowners to reduce their monthly payments by refinancing. That has made it easier, and more attractive, to keep making payments even if their homes are "underwater," or worth less than the borrowers owe. And that has helped keep the number of foreclosures from being larger than it has been.

The Federal Reserve has announced its intention to continue its low-rate policy for at least two more years. Though other forces, such as action in the bond markets, could drive mortgage rates up, few experts expect that to happen anytime soon, and low rates will make it easier for potential buyers to become actual buyers, buoying prices.

Moreover, Wachter notes, unemployment, while still high at over 8%, is not rising, and fewer workers feel the threat of layoffs. The stock market has been very strong, making those with investments feel wealthier. Data on the broad economy, while far from impressive, is generally positive, helping to ease fears of another recession. Taken together, factors such as these have given people a sense that things are getting better. Consequently, consumer confidence has risen, with the Conference Board Consumer Confidence Index rising to 70.3 this month, compared to 61.3 in August.

All these factors affect the most serious problem in the housing market: the enormous "shadow supply" of homes that could be dumped onto the market through foreclosures or other types of "distressed sales" as homeowners fall behind with payments or simply walk away. The potential for excess supply, which Wachter says could total 12 million to 14 million homes, has helped depress prices.

Now, however, worries about a shadow supply are easing. "People are less likely to walk away when they see prices rising," she says. Although more than 20% of homeowners with mortgages remain underwater, many of them presumably want to stay in their homes and would prefer to avoid the taint and financial problems that follow a foreclosure. Even if they think they will remain underwater for years, many will continue making payments, since rising prices make them believe that they will get above water eventually, Wachter says.

Also, once prices stopped falling, investors began to move in, picking up homes and turning them into rentals. "Although a mountain of distressed properties remains to be sold, investor demand for these properties appears strong," Wachter and her co-authors write in their paper. "Prices have fallen enough to allow investors to purchase and profitably rent these homes until the market recovers."

Another factor in the market's strengthening, according to Wachter, is better results from the Obama administration's programs for helping homeowners. Critics have accused the administration of being too cautious, and the government has acknowledged that its programs for homeowners have helped far fewer than expected. Under various names, these programs aimed to modify mortgages to reduce homeowners' payments, often by replacing relatively high adjustable interest rates from loans issued at the peak of the bubble to low fixed rates available over the past few years.

One of the main programs, the Home Affordable Refinance Program (HARP), was originally intended to help four million to five million homeowners, but has fallen far short of that goal.

Among the problems encountered by the various government programs: Lenders, which had cut staff after the bubble burst, were not equipped to handle the paperwork efficiently. And although many experts said the most effective modification would reduce the borrower's principal, or outstanding debt, many lenders were reluctant to book the losses that move would entail. Some apparently preferred to bet that many borrowers who were denied modifications would continue to make their full payments anyway — bigger payments than they would make after modification. Some critics feel Obama erred in not following through on his plan for legislation to give bankruptcy courts "cram down" authority to impose principal reductions on lenders.

But the administration was, to a large extent, operating in unknown territory. The recession ended in 2009, encouraging hopes that the housing market would improve on its own. There also was concern that efforts to help homeowners would encourage defaults or be seen as a bailout for people who had made foolish or reckless mistakes. After the catastrophes with Fannie Mae and Freddie Mac, the mortgage-funding giants the government took over in 2008, the administration did not want to choose another option — buying up troubled loans to make it easier for borrowers to refinance.

But after faltering for a couple of years, the administration's programs got better in 2010 and 2011, Wachter says, largely because of stronger efforts to get lenders to reduce borrowers' principals, in some cases by allowing lenders to share in any subsequent gains in a home's value. Not only does principal reduction make payments smaller, it also makes homeowners more confident that they can get above water sooner, so they would not have to bring cash to the table in a sale.

In late 2011, the administration altered HARP in various ways, Wachter and her co-authors note in their paper. For the first time, for example, the program allowed participation by borrowers with loan-to-value ratios higher than 80%, and it streamlined the appraisal and underwriting process. As a result, HARP refinanced more loans in the first half of 2012 than it did in all of 2011. Other changes to various programs have made it easier for more borrowers to qualify.

The paper also notes that "there are more short sales than foreclosure sales for the first time since the housing crash began." In a short sale, the lender agrees to consider the loan satisfied after the home sells, even if the proceeds fall short of the loan amount. An increase in short sales shows that lenders are more eager to get distressed loans off the books, and these sales help homeowners get out from under with less damage to their credit than they suffer after a foreclosure.

Among the signs of housing-market improvement are gains in stock prices of home builders, Wachter adds. Toll Brothers, for example, is now trading above $35 a share, up from less than $15 a year ago. While home building remains weak compared to past years, investors clearly anticipate better times.

That's good news for the economy as a whole, because the construction industry typically leads recoveries.

"Once expectations for housing turn positive, the foreclosure crisis will quickly abate and the economic recovery will gain traction," Wachter, Zandi and their co-authors write. "Given that house prices in many parts of the country are already low relative to household incomes and effective rents, it wouldn't take much additional policy effort to accomplish this."

The key, they say, is to continue efforts to reduce the number of loans in delinquency or foreclosure, to prevent those homes from bolstering supply. "Under reasonable assumptions, this requires reducing the number of impaired mortgage loans by 500,000 to one million over the next 24 months, below the level that would exist otherwise," they write.

To do that, the government should continue working to spur refinancings to lower borrowers' payments, press for principal reductions and encourage sales to investors who will rent out homes until the market gets stronger, the authors note. Investors, for instance, could be allowed to take their tax deductions for expenses right away, rather than pacing them over the years.

Wachter, Zandi and their co-authors also suggest a government-sponsored rent-to-own program that would allow people to get into homes they could not qualify to buy, with a promise that they could get a mortgage if they keep up with rent payments for a number of years.

Meanwhile, the next bubble is far off, Wachter notes, as prices are likely to rise by only 1% to 2% a year for some time. "Bubbles emerge, ultimately, in land prices," she says. "And land prices are way off their highs. We're years away from [a new bubble] because prices are not, in most markets, anywhere near where they were."

"Why the U. S. Housing Market Is Poised to Enter a ‘Virtuous Cycle’." Knowledge@Wharton. The Wharton School, University of Pennsylvania, 10 October, 2012. Web. 22 October, 2020 <https://knowledge.wharton.upenn.edu/article/why-the-u-s-housing-market-is-poised-to-enter-a-virtuous-cycle/>

Why the U. S. Housing Market Is Poised to Enter a ‘Virtuous Cycle’. Knowledge@Wharton (2012, October 10). Retrieved from https://knowledge.wharton.upenn.edu/article/why-the-u-s-housing-market-is-poised-to-enter-a-virtuous-cycle/

"Why the U. S. Housing Market Is Poised to Enter a ‘Virtuous Cycle’" Knowledge@Wharton, October 10, 2012,
accessed October 22, 2020. https://knowledge.wharton.upenn.edu/article/why-the-u-s-housing-market-is-poised-to-enter-a-virtuous-cycle/