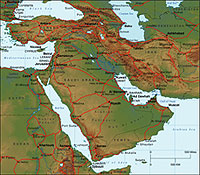 As opposition to President Hosni Mubarak’s government enters its seventh day, it is far from clear what the future holds for Egypt, the Middle East, the U.S. and the global marketplace. Knowledge at Wharton asked two faculty members who have studied this region for their opinions on what led up to this crisis, and what will unfold in the days and weeks to come.

Mubarak’s grip on power seems tenuous, and given his age (82), it is almost certain that he will not be president much longer, says Wharton management professor Mauro Guillén, director of the Joseph H. Lauder Institute for Management & International Studies. “Another matter is the Mubarak regime. The middle class in Egypt does not want disorder. The upper class, needless to say, is eager to preserve the status quo. I very much hope that the opposition leaders can figure out a way of sharing power with the regime, and then perhaps organize open elections in two to three years.”

As for whether the protest movement in Egypt will spill over to other Arabic countries (besides Tunisia), “there are no true democracies in the region” — from Morocco in the West to Iraq in the East, Guillén notes. “It is a part of the world that has always been ruled either by benevolent monarchs or sheikhs, or by strongmen, frequently from the military. But the basic problem is not democracy; it’s unemployment, which is as high as 25% or 30% in many countries … and as high as 60% among young people. When you do not have a job, you want change. You also want change when you are oppressed, to be sure, but I do not think that is the factor that explains unrest right now.”

Guillén does not see Egypt becoming another Iran. “The Iranian revolution of 1979 was a popular-religious uprising with a clear leader– Khomeini. There is no such figure in Egypt. There is an Islamic political movement (the Muslim Brotherhood), but it does not have the support of the urban middle and upper classes in the country.”

The unrest is “primarily motivated by economic issues,” Guillén emphasizes. “If instead of a peaceful settlement with the opposition, what we see is bloodshed and chaos, then Egypt’s two most important sources of income will suffer: tourism and the Suez Canal. As the most important economy in the region, what happens in Egypt would affect neighboring countries. That’s why it is so important that the opposition play a constructive role, allowing the supporters of the regime to find a place in the new state of affairs that is created with this transition.”

Howard Pack, Wharton professor of business and public policy, is co-author of a book entitled, The Arab Economies in a Changing World, written with Marcus Noland, a senior fellow at The Peterson Institute for International Economics. In a blog written today, Pack suggests that “the immediate response to the revolutions sweeping the Middle East is to blame poverty, unemployment, and rising food prices…. Yet per capita economic growth in the high population nations such as Egypt [is] comparable to many other middle income countries, poverty [is] not high by international standards such as the percentage of population living on less than two dollars a day, and progress in indicators such as life expectancy, infant mortality, and years of education has been quite remarkable, especially in Egypt. Tunisia’s standard of living and other indicators are even better.”

While the major problem that countries in the Middle East face is “providing employment for the growing labor force,” the causes for the discontent are many, Pack adds. These include governments’ failure to pay attention to unrest among their populations, lack of job opportunities specifically for young people — “Indeed, many of the leaders of the current unrest are university graduates” — corruption and nepotism. Yet Pack sees several ways out of this political, social and economic morass. One is to increase exports of labor intensive manufactured goods to the European Union because, as Pack notes, exporting is a “major route to generating jobs,” and Egypt’s proximity to the EU means relatively low transportation costs.

To encourage exporting, Pack suggests improved road and port facilities, the establishment of special economic zones, and efforts to improve productivity. Higher-quality education and more advanced technology are also needed. “It needs to be emphasized,” he points out, “that a move towards an Iranian style government will hardly address these issues as it is likely to be accompanied, as in Iran, by a Soviet style command economy with all its attendant failures. The rest of the world has little leverage [over] the outcomes of the current movements. But whoever emerges on top will face the same labor unrest and the need to implement changes ranging from education reform to economic policy. Americans need [no] reminder of how difficult such changes are. Given the history of recent revolutionary governments from Cuba to Iran, there is little room for optimism.”