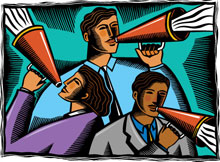 Call it viral, buzz or word-of-mouth advertising: Getting customers to spread the word about a new product through their social or professional networks is a hot strategy in the marketing world. Its proponents insist that the technique — whether online or face-to-face — is sure to boost a company’s return on investment (ROI).

But how can companies find the right individuals to deliver the message? Marketers may wonder if they are finding the best “seeding points” — that is, well-connected people at the hub of social networks who will latch on to a product and promote it widely among the people they know.

New research led by Wharton marketing professors Raghuram Iyengar and Christophe Van den Bulte, working with University of Southern California preventive medicine professor Thomas W. Valente, has found that traditional targets may not be as influential as previously thought. The pharmaceutical firm that sponsored the research for their recently published paper, “Opinion Leadership and Social Contagion in New Product Diffusion,” had its “a-ha” moment when they found Physician No. 184 on a map.

The map was part of the researchers’ presentation that reported the results to the sponsoring firm. Charted on the map was a tangle of points and lines representing physicians practicing in a large city and the connections between them. Researchers had tracked how prescriptions of a new drug spread from one physician to another, depending on who talked to whom and referred patients to whom.

Mapped out on the screen, the story became clear: The medical community was actually divided into two sub-networks split apparently by ethnicity, with one sub-network dominated by physicians with mostly Asian names and the other with mostly European names. Connecting the two, like a spider suspended on a thread between two webs, was the dot for Physician No. 184 — a doctor the company’s marketing department and salespeople barely knew.

Not only did the study indicate that word-of-mouth had been affecting physicians’ prescription behavior — even after controlling for the effect of sales calls (referred to as “detailing visits” in the pharmaceutical industry) — but it also showed that converting the right individual could have a dramatic impact. And for executives in the conference room, it revealed something else: They had been overlooking some of the networks’ most important social hubs.

“That was the biggest ‘a-ha!’ for the company,” said Van den Bulte. Physician 184 “was not the most important in the number of connections he was getting, but he was vitally important in linking the networks.”

Traditionally, drug companies have focused their efforts on reaching notable community leaders, believing well-known experts to be the most effective emissaries of a new product. In other industries, said Iyengar, marketers and their market research companies have tried to find opinion leaders through direct surveys, asking people, in essence, “Are you an opinion leader?” and then linking those answers to observable characteristics such as age, income, education level, media habits and so on. That, however, has proved rather ineffective, leading some companies to give up on finding seeding points and go for flashy “buzz” campaigns everyone talks about, such as when British fashion retailer French Connection UK put its four-letter acronym in large letters on its bags and shopping windows.

Both of those approaches differ from those used by sociologists and network researchers, who focus on how people interconnect. For example, to identify the most influential leader in a medical community, a sociologist would ask, “Whom do you turn to for advice for treating this kind of ailment?” The different approaches can produce widely different results, the study found.

The researchers tracked the behavior of physicians in three cities — San Francisco, Los Angeles and New York — looking specifically at how quickly they started prescribing a new drug to treat a potentially lethal disease. The study started by identifying the physicians who were active in treating the condition during the two years before the drug’s launch. Researchers then surveyed those physicians and identified a group of what researchers called “self-reported opinion leaders,” doctors who reported themselves to be well-connected, influential members of the community.

The researchers also asked all physicians to name up to eight other doctors with whom they felt comfortable discussing the clinical management and treatment of the disease, and up to eight doctors to whom they typically referred patients. These nominations from fellow physicians produced a second group, whom researchers called “sociometric leaders” — the most influential and well-respected physicians in the community based on how often they were mentioned by their peers.

“Our study shows that these two measures of opinion leadership do not overlap very well,” said Iyengar. “Asking people how important they are is not the best measure of how important they really are. Just because people think they’re important doesn’t mean it’s true. And some people are actually more important than marketers believe, or even they themselves believe.”

Physician 184, for example, didn’t fit the description of an individual who marketers thought would be the most effective promoter of their product — an outgoing, high-profile doctor whose name often pops up on research papers or on conference speaker lists. “Physician 184 was self-effacing. He did not want to stand on a soap box,” said Van den Bulte. “He was respected, but not in a flashy fashion. He was the opposite of a rock star.”

Physician 184 didn’t stand out as a “self-reported opinion leader,” but he did stand out in the second group. He was known widely in the local community because he was very involved with treating patients suffering from the disease, and worked tirelessly and closely with colleagues to solve problems and get things done.

Matching the network data with prescription records, the study showed that sociometric leaders like Physician 184 were quicker than the self-reported opinion leaders to use the new drug, and were also more likely to influence other physicians to try it. The study also found that sociometric leaders did take into account what their colleagues were doing. For marketers, this implies that word-of-mouth can affect opinion leaders as well as followers, in contrast to what is often believed and taught — that only followers are affected by social influence.

Although self-reported opinion leaders were quick to adopt the new drug, they lagged behind the sociometric leaders identified by their colleagues, the study found. The researchers speculate that this was because the self-reported opinion leaders, identifying themselves as having above average status, are less interested in what others are doing. “The people who believe themselves to be opinion leaders are less affected by others,” Iyengar said. “These are guys who say, ‘I know I’m important. I don’t need to care about what other people are doing.'”

The pharmaceutical company found the research so intriguing that it commissioned a similar study, Van den Bulte said. Researchers subsequently collected data for several cities in China where the company planned to launch word-of-mouth marketing efforts targeting sociometric, rather than self-reported, opinion leaders.

Meanwhile, Rivermark LLC, the marketing research company in Lambertville, N.J., that connected the Wharton researchers with the drug company for the first study, recently contacted Iyengar and Van den Bulte about conducting another study. “What is happening now is that people in the pharma industry are starting to wonder how to best re-allocate their marketing efforts to leverage the power of word-of-mouth and they want hard evidence about what works or not,” Van den Bulte said.

In the new study, the company has decided to re-deploy its sales force in three cities, reassigning its salespeople to target physicians who are sociometric opinion leaders, rather than self-reported leaders or high-profile research experts. As part of the effort, the company has even tweaked its lists of physicians who are invited to speak at seminars and other events.

The study will compare a year’s worth of sales in the three cities with three other similar cities in which the sales force makes no change in strategy. The new sales figures will also be contrasted with sales figures in the previous year.

“This second study tries to answer the question of whether corporate marketers can actively leverage opinion leaders to turbo-boost their marketing ROI. This may well be the very first academic study open to peer-review that investigates this in a clean before-after, test-control field experiment,” said Van den Bulte. “The data is still coming in, but the early results are encouraging.”