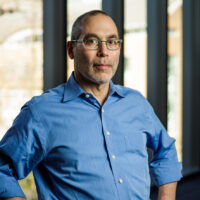 For most of the past century, the factory floor offered a path upward for Americans short on education. But millions of “good” manufacturing jobs have fallen victim to automation and global competition, leaving many low and semi-skilled workers to turn to a 21st century replacement: the telephone call center.

The category includes just about any job that requires a worker to sit at a phone and computer making sales calls, taking orders or fielding questions from customers. These workers range from telemarketers to catalogue order takers to tech support agents for computer and software users.

“This has become a huge place to start working for a lot of people,” says Wharton management professor

Steffanie L. Wilk, who has been studying call centers. “You almost cannot think of a business that doesn’t utilize call centers to some extent.” Wilk and others participate in the Wharton Financial Institution Center’s Call Center Forum which meets semi-annually to review the most recent research in this area. The next meeting is May 16-17 in Philadelphia.

Call centers are made possible by cheap long-distance phone rates and computer systems for fulfilling customer orders and compiling sophisticated databases. The industry estimates it has at least 3.5 million workers, 75% of them women, making call centers one of the three or four largest employment categories, according to CallCenter magazine. Other estimates put the figure as high as 6 million.

While call centers can be found anywhere, many are located in the cheap labor markets of the Midwest and Southwest. For the bulk of workers, wages run from $7 to $14 an hour – far less than workers make assembling cars and many other traditional factory products.

While call center jobs don’t pay as well as factory jobs, and the workplace tends to be cleaner and safer, there are some strong similarities. Most striking: Workers at both are highly regimented and constantly gauged against statistical performance standards, primarily speed. The call center worker may be required to field a certain number of calls per hour. Big-Brother computer programs can record a worker’s every keystroke, gauging whether she has tried to sell the right products or wasted time erasing data-entry mistakes. “It’s a very stressful job,” Wilk said.

But unlike most factories, call centers are easily set up and taken down. If the local labor pool gets tight and wages begin to rise, the operator can simply move.

Researchers at Purdue University found that call centers can operate more efficiently by spending money on high quality software and hardware than by paying more to attract workers with better skills. Workers with low skills who require little training are easy to replace. Annual turnover rates vary widely but are generally between 25% and 45%, Wilk said.

And yet certain types of call centers, including those using skilled tech support personnel, need to minimize the costs of turnover, such as recruitment and training. Often, then, the strategy is to have a mix of skilled and unskilled workers.

Most experts expect call-center employment to grow over the next few years. But the long-term picture is cloudy. If a computer program becomes easier to use, the need for tech support diminishes. Online shopping could undermine the future for catalogue call centers, and new laws curbing telemarketing could eat into that profession.

The industry also is groping with questions about how to best use this relatively new mix of advanced technology and labor-intensive service. It’s far from clear how the answers will impact the need for workers and their experience in the workplace.

Much of the current academic research centers on how to balance tradeoffs. Is it worth it, for example, for a call center to hire more workers so that customers don’t spend so much time on hold?

“The technology, in one sense, is racing ahead of people’s ability to manage it,” said Noah F. Gans, professor of operations and information management at Wharton. “I don’t think anybody really understands what you’ve got to do in any kind of consistent way.”

In the simplest call centers, the customer is routed to the next available worker. That might work fine if the call center is merely taking catalogue orders. But it would not work as well for a bank selling mortgages or a brokerage recommending investments. “You cannot train every worker to do everything,” Gans said. “It’s too expensive. So you have to decide who to train.” That means the center must have a system for routing customers to the right agents.

Many sophisticated call centers identify the customer on first contact, by detecting one’s phone number or asking one to key in an account number. If the machine finds you are a valued customer – one who spends a lot – you are put on the short-wait line. Otherwise, the wait might be longer. The computer also may prompt the agent to pitch new products or services appropriate for a customer like you.

And yet, some businesses don’t feel a need to keep customers as happy as others do. Call Microsoft for help with Windows and you may have a long wait. “That might be the right model for Microsoft because they are a monopoly,” Gans said. “With a retail bank, you would never put up with that.”

While all this sounds scientific, it is far from exact. Among the key but unanswered questions: When does it pay to pamper the small-account customer in hopes of landing more business later?

“What the call centers have been doing up to now is pretty much trial and error,” said Lawrence D. Brown, a Wharton statistics professor who is examining call center staffing. “The big expense in a call center is the agents’ time, and there are a lot of agents.” In fact, labor can account for 60-70% of the call center budget.

Brown has been studying a large American bank that has about 1,000 call center agents in three locations. “They want to use those agents efficiently, which means they should be serving customers most of the time…. On the other hand, you don’t want customers waiting – not very long. You don’t want customers abandoned – getting annoyed and leaving.”

At the bank he is studying, the average customer waits only 15 seconds before talking to an agent, and very few hang up. But he has looked at data from a foreign bank where customers wait an average of half an hour, and abandonment rates are much higher. The goal is to find the optimum point at which customers feel they receive good service but the bank does not have a lot of agents just sitting around.

Finding that point depends on research that is still underway. It is important to learn, for example, how many of the customers who hang up call again later. If lots do, the abandonment figure is not as bad as it at first seems.

Still, the abandonment rate may be the single most important statistic call centers have to work with, says Avishai Mandelbaum, professor of operations research and service engineering at Technion in Haifa, Israel. “It matters because you lose business,” he said. “Through abandonment you can see what customers think about the worth of their time.”

Some of the research so far points to conclusions many might find counter-intuitive, he added. It turns out that customers designated VIPs are willing to wait on hold longer than customers who are less valuable to the bank. That may be because the important customers have more at stake in the transactions they wish to conduct.

The research also suggests that recorded announcements telling customers how long they’re likely to wait on hold often backfire. Customers who get these periodic announcements tend to hang up sooner. There also are examples of how the call center’s Big Brother system can backfire. Data from a foreign bank showed that some agents habitually hung up on customers right after answering their calls, Brown said. These agents apparently realized they were rated on the number of calls they answered, not the quality of service they gave. The big American bank, in contrast, prohibits the agent from hanging up first.

For businesses, answers to the many questions about call-center efficiency will impact the bottom line. For call center workers, the answers will determine whether the jobs are plentiful and desirable.

Whether call center work is an improvement over factory work is unclear, said Wilk. “I guess you have to think about what improvement means.” Call centers workers are less likely to lose fingers in whirling machines, though repetitive stress injuries are a hazard for computer users.

Career advancement at call centers is not as good as in many other industries, she adds, though some entry-level agents gradually get the training and experience and move up to better-paying jobs. The typical agent-to-supervisor ratio is 15-to-one, according to CallCenter magazine. That means there are a lot of candidates for a small number of supervisory positions; in many industries, the ratio is half of that.

A recent poll by Callcentercareers.com, an online job site, found the leading cause of dissatisfaction among call center workers was lack of promotional opportunity, cited by 26.4% of those polled. Next was “being unfairly paid for the work they perform,” cited by 24.2%. After that came complaints about feeling unrecognized, being bored and feeling inadequately trained.

Does the growth of call center employment signal the growth of an unhappy class of workers? “All three of us have some fear about what it means for low-skill workers,” said Wilk, who is conducting research with Larry W. Hunter, another management professor at Wharton, and Rose Batt, a labor economist at Cornell. Many call center workers will find themselves in dead-end jobs, easily dismissed when business lags, Wilk predicted.

But there is some hope for these workers, she added. “Firms are starting to realize that sometimes your only contact as a customer is through these people.” These call center operators understand that creating a good workplace can pay off in good customer relations. “So there are some places that really do take this in the direction they should,” Wilk said. “Do we have a lot of hope that [the industry] is going to do that quickly? No.”