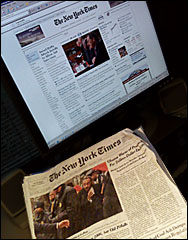 On March 28, The New York Times launched its second online subscription model in nearly six years. And earlier this year, News Corp. launched a newspaper called The Daily, available exclusively on Apple’s iPad. The common thread between the two efforts: Both news giants are trying to test digital platforms, garner more subscription revenue and future-proof a content business that has been traditionally delivered via newsprint.

At issue is discovering the consumer threshold for paying for online news. “It’s an awkward period for content businesses,” says Kendall Whitehouse, director of new media at Wharton. “There’s the widespread notion that everything online has to be free, but that’s not sustainable. There has to be a way to pay for the work of professional journalists and photographers.”

What’s unclear is whether the Times‘s latest online subscription effort — the company tried charging readers in 2005 only to abandon the effort two years later — will prove to be a winner. News Corp., which owns The Wall Street Journal, knows the subscription model can work since WSJ.com has been a success for years. (According to paidContent.org, the Journal has 449,139 “e-edition” subscribers, including Kindle, app and online-only subscriptions — a 10% increase over last year.) However, some are perplexed by News Corp.’s decision to limit The Daily to one platform — the iPad — for now. “The Daily was a bad idea from the start,” says Wharton marketing professor Peter Fader. “The iPad’s penetration is tiny and consumers are used to a real-time news source. It would have made more sense to start on the web and have an iPad app, too.”

Fader argues that the Times had a better model with its “TimesSelect” offering in 2005. TimesSelect pricing — a flat fee of $49.95 for the year — was easier to digest. “Instead of tweaking TimesSelect and sticking with it, the company threw it away,” he says. “The Times should have been more patient.” In a letter to readers in 2007, the paper said it was ending TimesSelect because “readers increasingly find news through search, as well as through social networks, blogs and other online sources.” The publication’s bet was that it could garner more traffic by remaining free and therefore bolster ad revenue.

The conundrum faced by the Times and News Corp. revolves around whether consumers will pay for news on various platforms. Subscription models are prevalent in media, but not all content has been treated equally by consumers. Users will pay for online music courtesy of Apple’s iTunes. They will also buy subscriptions to music services like Sirius XM and Rhapsody. On the video front, more than 20 million subscribers pay Netflix at least $7.99 every month.

But Fader suggests that successful subscription models are not dependent on the type of content. Consumers will pay for online journalism and news, he says, but the model has to be simple. “The main driver is the way the business models are managed. Netflix works because of Netflix. It has a wonderful service and a simple model.”

One of the reasons the Times‘s model may be confusing is that it works to meet multiple — and potentially conflicting — goals. For instance, the publication allows readers to access 20 articles for free to keep website traffic robust and garner referrals from sites like Facebook, Twitter and Google News. Meanwhile, a digital subscription to the Times can be more expensive than a print version. This multifaceted model creates some strange outcomes. For instance, a Times subscription for the web, smartphone and tablet apps cost more a year than the print subscription — $455 for digital vs. $384.80 for print — despite the fact that the company doesn’t have to pay for paper or fuel to deliver the newspaper. “It’s cheaper to get the newspaper and throw it away than to get the digital media subscription,” says Fader.

“This is all a big experiment to see what makes money,” says Wharton management professor Saikat Chaudhuri. “I don’t think anyone has settled on a model.” He notes that the Times, News Corp. and others can tweak subscription packages once they find out what people will pay for, adding that companies need to give online content subscriptions at least a year to bear fruit.

“Many people have written off the newspaper in the era of the Internet, but before it is written off completely, let’s find out what people will and will not pay for,” says Chaudhuri. “I applaud the move to experiment.”

Fader agrees and recommends that companies like Times and News Corp. keep trying. “But there will be a lot of tension and short-term losses until the right model emerges.”