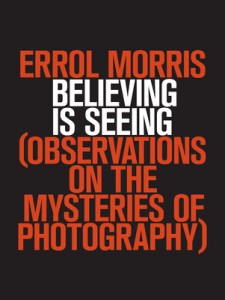 The essays in Errol Morris’s recent book Believing Is Seeing (Observations on the Mysteries of Photography) explore a series of mysteries, each based on one or more photographs. Writer and documentary filmmaker (The Thin Blue Line, The Fog of War, Tabloid) Morris uses the photos as the starting point for explorations of what the photos tell us and, in many cases, what they hide.

The photos Morris analyzes range from the relatively obscure (a pair of 1855 photographs of a battle-scared roadway from the Crimean War) to the all-too familiar (the horrifying photos of a hooded prisoner from Abu Ghraib). In each case, Morris wants us to look past the “obvious” truth we think we see to explore the deeper meanings hidden beneath. Much of the material in the book originally appeared in a different form in The New York Times’ Opinionator blog.

The first chapter, “Which Came First, the Chicken or the Egg?” explores — in great detail — two photos taken in 1855 by Roger Fenton, a photographer sent to document the British war in the Crimea. Morris’s obsession with detail is revealed at the opening of the chapter. When his friend Ron Rosenbaum incredulously asks, “You mean to tell me that you went all the way to the Crimea because of one sentence written by Susan Sontag?” Morris replies, “No, it was actually two sentences.”

And, indeed, Morris travels to the Crimea in an attempt to either contradict or confirm Sontag’s assertion in her 2002 book, Regarding the Pain of Others, that Fenton staged one of the two photos by scattering cannon balls on the roadway. One might wonder why it matters, but Morris spends nearly 70 pages exploring Fenton’s photos: looking at how the sunlight falls on the objects in the two photos in an attempt to determine which was taken first, noticing the relative position of stones scattered on the ground, and, yes, traveling to the Crimea to see the spot for himself. Morris’s tortuous investigation eventually determines the relative sequence of the two photos, but why the objects were moved remains something of a mystery.

Another chapter examines the famous “hooded man” photo of a prisoner at Abu Ghraib, and explores who is – and who isn’t – the man beneath the hood. In another, he looks at other chilling photos from Abu Ghraib showing U.S. Army reservists giving a “thumbs up” over the corpses of dead prisoners. Unlike Fenton’s photos, these are pictures we’ve all seen — and have opinions about. Morris asks us to look deeper and reassess what we think we know about these photos. Are they examples of a perverse disrespect of a corpse or critical evidence of an even more heinous act (or, perhaps, both)?

Additional chapters look at whether other photographs were somehow staged or manipulated to suit political ends. A depression-era shot of a cattle skull on parched land was declared a “fake” by opponents of Franklin Roosevelt, who was then campaigning for a second term, because the skull may have been moved to compose the shots. The photographers in Roosevelt’s Farm Security Administration were tarred with the epithet “drought counterfeiters” for manipulating the scene – even though the area was, in fact, experiencing one of the worst droughts in American history.

Seventy years later, a slew of news photos from different photographers that all show a child’s toy lying on the ground among bombed ruins in Lebanon raises similar questions about whether objects were placed in the scene to make a political statement.

In the final chapter, Morris traces the curious and dark history of a photo found in the hand of a slain Union soldier on the Gettysburg battleground. The soldier had no identification, no regimental insignia or personal effects, except a photo clutched in his hand of three small children. Morris follows the trail to identify the soldier and uncover the story of the now orphaned children.

Morris’s obsession with capturing every detail can be wearing at times. At one point in the exploration of the Fenton photos, Morris, having reached a dead end, wonders what to do next. He contemplates collecting all the extant copies of the Fenton photos from around the world. “It seemed painstaking and absurd,” Morris writes, “but would this be any more absurd than what I had already done?” Indeed.

Interviews with various sources are, apparently, reprinted verbatim and in full, where an edited summary might cover the key points in a more readable form. But one senses that this type of editorial refinement would offend Morris, who wants to wring every bit of truth from each snippet of source material.

As fascinating as these studies are (for the reader who has the endurance to follow their threads through all the details), some would seem to have more relevance than others. Why American soldiers took snapshots of prisoner corpses at Abu Ghraib is an important exploration of U.S. military conduct. On the other hand, whether an 1855 photo from the Crimea was “staged” by placing (or removing) cannon balls would seem to be of only arcane academic concern.

But Morris wants to do more than explore the facts behind these specific photos. He wants us to question what we see, to realize that “photographs provide evidence, but no shortcut to reality.” Morris writes: “It is often said that seeing is believing. But we do not form our beliefs on the basis of what we see; rather, what we see is often determined by our beliefs. Believing is seeing, not the other way around.” In this era of political debate by sound bite and news squeezed into 140-character tweets, it’s refreshing to find someone willing to search behind the “obvious” meaning of a headline — or a photograph — to find the deeper truth buried inside.