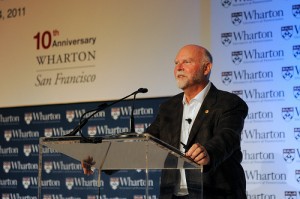 Biologist and entrepreneur J. Craig Venter was born in 1946. Today, there are three people alive for every one that existed the year he came into the world. With an increasing population comes more strain on the Earth’s resources. Venter believes genomics, or the study of the hereditary information of organisms, is key to filling some of those needs.

During a keynote address at the Wharton Global Alumni Forum, he shared additional statistics: Starting in the mid-1800s, it took about 112 years to add a billion people to the global population. “We’re now adding one billion people every 11 to 12 years, and it’s not clear when the numbers are going to tap out,” said Venter, who is founder and president of the nonprofit J. Craig Venter Institute and also CEO of Synthetic Genomics, a private company. “We are a society that is 100% dependent on science for the future.”

Venter was part of the team that was the first to sequence the human genome, and in 2010 played a key role in creating the first cell with a synthetic genome. The moral and ethical implications of Venter’s work have been the source of debate, but he argued that such efforts are key to human survival. “We’re trying to go from reading the genetic code to getting new life forms right out of the computer. It will be much to the benefit of the future of humanity as we try to find ways to feed and provide fuel and water to our ever-expanding population.”

To Venter, genes are the components that can be used to design new “software” for specific purposes, including fuel and vaccines. He noted that the first genomic vaccine, for meningitis B, is coming to the market, and technology is now to the point where a synthetic vaccine for the flu can be developed in less than 24 hours. “With H1N1, it took over six months to get a new vaccine on the market.”

In trying to create the first artificial life form, Venter’s team learned that in some cases, just one error made the difference between success and failure. But they also wanted to make sure that the success was real and not simply the result of a contaminant. So the team built “watermarks” into parts of the genetic code where they knew major insertions would not cause problems.

At first, the watermarks were simply the 46 names of all of the scientists involved in the project. Later, they added three quotations, including one from James Joyce: “To live, to err, to fall, to triumph, to recreate life out of life!”

“The genome that we had has these [watermarks] in it, and that’s very unlikely to occur naturally in the world,” Venter said. “We were very proud of ourselves until I got a letter from James Joyce’s estate’s attorney,” claiming the scientists needed permission to use the quote. (It was later determined that the quote’s inclusion was fair use.)

Venter also discussed other efforts, including an air genome project, to determine what kind of DNA can be found in different environments. Testing done by his team found that the indoor air of a New York City office building contained mostly human DNA — but 15% came from rodents. Outside the office building, rats made up 40%.

“We live in a microbial environment, and understanding it is going to be critical for our survival,” Venter said.